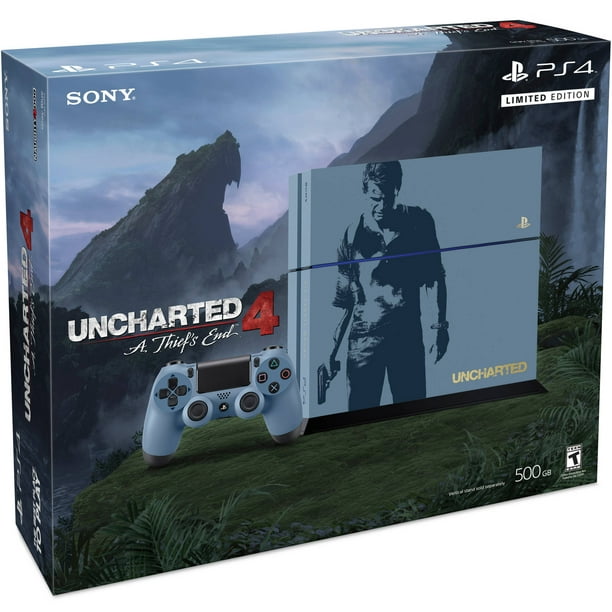 We aim to show you accurate product information. Manufacturers, suppliers and others provide what you see here, and we have not verified it.
Experience powerful graphics, immersive games and streaming entertainment with this limited-edition PlayStation 4 bundle inspired by the blockbuster game Uncharted 4: A Thief's End. A custom PlayStation 4 console with a stylish gray/blue design, a matching DualShock 4 Wireless controller and Uncharted 4: A Thief's End are all included in bundle. The console is adorned with a screen-printed graphic of Nathan Drake, the globe-trotting protagonist of the Uncharted series, and it contains 500GB of storage for games, video and other media.
PlayStation 4 Limited Edition Uncharted 4 Console Bundle (PS4):

Several years after his last adventure, retired fortune hunter, Nathan Drake, is forced back into the world of thieves. With the stakes much more personal, Drake embarks on a globe-trotting journey in pursuit of a historical conspiracy behind a fabled pirate treasure. His greatest adventure will test his physical limits, his resolve, and ultimately what he's willing to sacrifice to save the ones he loves.

Uncharted 4's multiplayer is better than ever featuring new allies, supernatural abilities, and the gear you need to outrun and overcome your rivals in fortune:

This is a great buy for the bundle that came with an extra controller and 3 months of Playstation plus. The only thing I had a problem with was the shipping the box was ranged from being shipped luckily the system was not harmed. Like Walmart but they should really look into making sure the packages they are send will be ok.

The shipping took no time at all. The game was in perfect condition and plays like a dream. It comes with: 1 controller, all the necessary cords you'll need to play (hdmi, charger, power cord) and the design is absolutely beautiful... Also uncharted 4 is well worth the wait. Graphics are phenomenal and the game plays well!

I bought it on line great service also got it on time.

This item is brand new, works well and I've had no problems

Excellent product, I love it. I was lucky to find this limited edition Uncharted 4 PS4 with that grey blue color when I purchase it directly from Walmart.com & I picked up at my nearest Walmart store.

I bought this same console the first time and it did not work. I decided to order a another one it was perfect I'm glad I did because it works perfect and does not shut off like the first one did. I love this console and glad I didn't not get the slim these older models are rare to find it especially brand new and I'm very satisfied. Also the shipping was on point. The console is sick that grey blue color is awesome. Thank you walmart

love it no problems at all

no problems at all upgraded my hardrive to a 1tb hardrive

THIS IS A CHRISTMAS GIFT FOR MY GRANDSON SO CANNOT REALLYRATE IT SINCE HE HAS NOT RECEIVED OR USED IT YET. IT WAS EXPENSIVE EVEN ON SALE BUT BEING NEW THE PRICE IS ALWAYS HIGHER.

1. Uncharted 4 game, console and controller and cable
by Gaby
Helpful?
2. The package only comes with 1 controller. Like most consoles.
by Cthomas
Helpful?
2 Answers