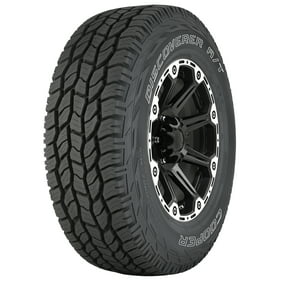 We aim to show you accurate product information. Manufacturers, suppliers and others provide what you see here, and we have not verified it.
Learn about Auto Services | Find an Auto Care Center
Pirelli?s new Scorpion All Terrain Plus offers light truck and SUV drivers a durable, high performance driving experience in a wide range of challenging on or off-road conditions. The deep tread grooves with conical stone ejectors provide a self-cleaning pattern aimed at increasing integrity and safety, delivering excellent mud, wet and snow traction ? for both on road and off road. Innovative design elements create an aggressive look that complements the product?s performance. Backed by a 50,000 mile limited tread wear warranty*, the new tread compound has a high resistance to cutting and chipping to enhance overall durability and reduce wear.** *: for detailed info please visit www.us.pirelli.com **: as compared to the product?s previous generationPirelli Scorpion All Terrain Plus

What others said when purchasing this item
Because I choose the wrong tires at first.
MATTHEW, purchased on August 8, 2020

The second set of tires for my '03 Tacoma where from a white, tire-looking cartoon character, (no trademark infringement) because they came highly recommended. Sadly this set only had 18,403 miles when they had to be replaced; the driver front tire began developing longitudinal cracks throughout all the ridges, the other three were ok but I wasn't going to take a chance on just replacing that one tire. I researched various brands of tires and decided to go with the Pirelli Scorpion All Terrain Plus tires, sized 265/70R16, an original replacement.

Here's my review, so far, on the 88 miles I've driven on them already:

Appearance: Aggressive looking sidewall and tread, they are a head-turner at my neighborhood.

Handling: The tires handle good in cornering, curves, and braking. I can't say much for taking off (spinning out) at the light since I don't floor this truck like I used to floor my Grand National.

Traction: This set of tires has not been used on wet roads or while raining, nor has it been used on snow, mud, or sand, yet. With the large blocks on the tread, I'm sure the tread will clean out from any mud or rocks.

Noise: Drove on the city and there was hardly any noise. Drove on the highway at 70 mph and there was a low howling noise, low enough that having the radio on at the lowest setting, or just talking to a passenger, would override the tire noise.

I'm happy with this set.

Best tires we have ever purchased!

I have about 700 miles on these. They replaced the Dunlop P245/75R16's that came on my 2015 Tacoma. At first, these tires seemed to ride quite harshly, but that seems to have cleared up with a little use. They make a little more noise than the original tires, but not much.

The truck feels much more solid and planted with these tires. I drive offroad at times and these tires make me much more confident that I am unlikely to get stuck.

Service at Sams was excellent!

Reviewed by BGsoninlawBGsoninlaw
Written by a samsclub.com customer.
Helpful?