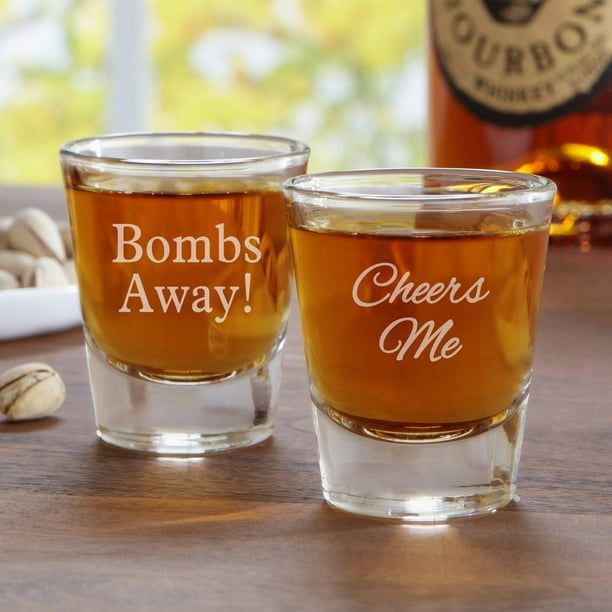 Personalized Create Your Own Shot Glass, Choose Block or Script

We aim to show you accurate product information. Manufacturers, suppliers and others provide what you see here, and we have not verified it.
The Personalized Create Your Own Shot Glass Choose Block or Script makes it easy to showcase your favorite phrase anytime you want to enjoy a drink. It has a standard size that's ideal to use for shots. The personalized shot glass can be customized in either block or script fonts, offering a unique style that stands out. The glass has a clear look, making it simple to see the chosen phrase and the contents inside. This item can feature one to three lines up to 14 characters each, so your favorite quote or saying should easily fit on.
Personalized Create Your Own Shot Glass, Choose Block or Script:

Very nice shot glass. Writing was clear and I love that you can personalize it. Shipping was faster than expected. Ive ordered 4 already!!

Great shot glass. Love that it can be personalized with whatever you want. I`ve ordered 4 already!

Looks just as expected!! He loves it!

Not that bad of a purchase, I got it as a present and all the other ones online were around 50$ at least. Although simple I think it's cute!

I ordered the shot glasses about 5/6 months ago or so, just now writing a review, as there were no reviews at the time of my purchase. I was sketchy about how it would turn out, so I ordered one glass to try it out. No harm, no foul I figured, either way, I would have a shot glass for my avid collection. I ordered the first one in script, 3 lines. My boyfriend's first name (first letter capitalized, lower case after (4 letters) second line was the symbol &, third line was my name, same presentation as his, 5 letters. They etched the lines and letters centered accordingly to one another, turned out great! It was proportionate to the center of the glass as well. Needless to say, he loved it, I loved it! The script isn't real large lettering, but I was not disappointed at all. If you order the script and you want larger lettering, maybe go with all capitals. After seeing how great the first one turned out, I ordered two more for a gift for my best friend and I. This time I tried two lines, block print. Her name/my name, second line I capitalized all the letters of an inside joke word between us following with #1 and #2 (2 separate glasses, one for her, one for me). It turned out fantastic as well! Centered and proportionate accordingly and the second line that I really wanted to stand out, it sure did. She absolutely loved it so much it brought tears to her eyes. If you want bold, go with all capitals, block print, whether you use one line, or all three. These make such great gifts, I'm so glad I have it a "shot". The only reason I didn't give it 5 stars is because they're a little pricey and since the last time I ordered, they've gone up and given as gifts, can become expensive depending how many you order. I think these would make sensational personalized wedding party (and such) gifts! I would upload a picture of the three glasses, but that would reveal our names. If you're sketchy like I was, just order one to try it out and go from there. I picked them up at Wal-Mart and they were packaged pretty good, none of them were broke or cracked, I checked there, and it was ready for pick-up in about five days, don't even think I waited a week, I was in shock! Anyway, can't go wrong with this purchase, even if the glass will never get used, just because it's your message to someone who means enough to you too personalize, even if it's only their name. I'll be ordering more. I need to order my boyfriend and mine's name in reverse so I have my designated shot glass to "drink to that" with. Ever get married, then I'll have to order a Mr & Mrs too! What would be even better to make it five stars, if they etched in color, that would really stand out!

for my wife on valentine'd day

Lettering very small not like the on the displayed picture

1. This is a single glass.
by CommunityAnswer
1 Answer

Walmart Protection Plans
Most items come with a limited manufacturer’s warranty. The addition of a Walmart Protection Plan adds extra protection from the date of purchase. Walmart Protection Plans cover the total cost of repair, or replacement, for products, as well as covering delivery charges for the exchange.
Walmart Protection Plan options and pricing can be found on the product page, as well as in your cart. Go towww.walmart.com/protectionto see all the coverage offered for each product. You can view your Walmart Protection Plan after your purchase in the Walmart Protection Plan Hub.
Product warranty:Manufacturer Warranty
Warranty Information:Our goal is to offer only the finest personalized gifts available, ones that will create lasting memories and provide years of enjoyment. Each item we select must meet our strict standards for workmanship and design. Our highly-trained production staff then artfully customizes each order to your specifications. And before any item ships from our facility, it must pass a final inspection for quality and accuracy. Personal Creations stands behind the quality of every product we sell. Cancellations and changes can not be made since each item is immediately manufactured with your personalization. All returns or exchanges must be made within 60 days of receipt. Personalized items cannot be returned for reasons other than defects in materials or workmanship. If your order it is not 100% free from defects in materials and workmanship, you may return it in new condition and in its original packaging for a prompt credit, exchange or full refund
Already purchased your product? A Walmart Protection Plan can be added within 30 days of purchase.Click here to add a Plan.
Related Pages :
webapp branch