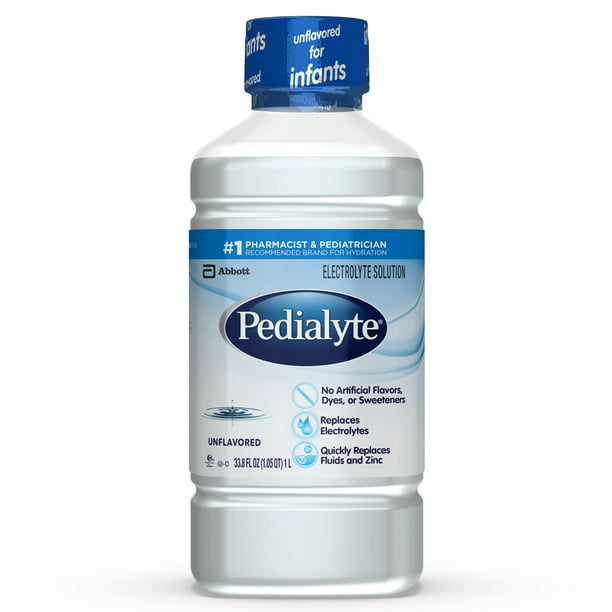 We aim to show you accurate product information. Manufacturers, suppliers and others provide what you see here, and we have not verified it.
Pedialyte Electrolyte Solution is an advanced hydration rehydration drink specially formulated with the optimal balance of sugar and electrolytes to help prevent dehydration in both kids and adults. From the #1 pediatrician* and pharmacist-recommended brand* for hydration, Pedialyte electrolyte drink is medical-grade hydration that quickly replenishes lost fluids and electrolytes. Pedialyte promotes fluid absorption more effectively than sports drinks, juice, or even water. Feel better fast with Pedialyte! *Among pediatricians and pharmacists surveyed, respectively (2017). Data on file with manufacturer†in select stores, The SNAP (Supplemental Nutrition Assurance Program) name is a service mark of the U.S. Department of Agriculture. USDA does not endorse any goods, services, or enterprises.

Instructions: For children under 1 year of age; consult your doctor.To rehydrate after fluid loss: begin with small frequent sips. 1?2 liters per day may be needed while symptoms persist. Consult your doctor if vomiting, fever, or diarrhea continues beyond 24 hours or if consumption needs are greater 2 liters per day.For general rehydration: sip as needed. Use under medical supervision.Ready to use. Do not add water or dilute. Taste best served cold.

I have to drink unflavored as my stomach cant tolerate Sucralose. Best w/ice. It brought my sodium level near normal range as I was washing it away with free water. I am a chemotherapy patient.

It's been way too many years since we've had infants and small children around, but we've found a new use for the Pedialyte. We use it on our rescue cats when they're not feeling too good, and to help them take oral medicine. We have one older cat (about 15 years old) whose diabetic and suffers from allergies. He used to fight us when we tried giving him his allergy pill, but since we started preceding it with a few syringes full of "Magic Water" (a.k.a. Pedialyte) he takes his meds without a fight. He loves the stuff. We have a second cat, about 16 years old who, one day, insisted on having some herself and now she's hooked on it too! She will sit there and beg for some while we're treating our other cat. Aside from the veterinary aspect, my wife says it helps her keep up her electrolytes when she really doesn't want the added sugars that are in many of the "sports drinks".

This is my way of hydrating after working outside in the warm weather. It is not sweetly flavored and has an almost unnoticeable flavor. Less sodium and sugar than sport drinks. I just add it to my water. Always check with your doctor before making any changes.

Best after a hard workout!

Best product EVER after a good workout! Also, great drink to help the tummy in the mountains. Happy Pedialy7te unflavored comes with zero sugar! Thanks!

I use this product anytime I get diarrhea. I love that it has no artificial flavors or dyes. I wish more products would remove those, especially from children's products.

Wife has a need for the contents of the pedilyte.

This product is a must to have on hand. It works great for adults who become dehydrated in the summer heat and also works great for your pets. We always get the unflavored.

It does the job

A great product for what it is, no frills, no flavor, but it works!

Great packaging. Love the twist top feature [This review was collected as part of a promotion.]

Wanted no flavor and this fit the bill. We put 1/4 cup in 1 liter of water to add a little electrolytes which also makes the water taste better.

1. We don’t manufacture a product specifically for pets and do not have studies on them using Pedialyte. Please check with your veterinarian to see what would be right for your furry friend. ~The Pedialyte Team
by Abbott Nutrition Team
Helpful?
2. No, these electrolytes cannot be used for a cat as they are made for human consumption.
by CommunityAnswer
Helpful?
3. Although it&#39;s designed for people, it&#39;s also safe to use with kittens of any age to help them replace fluids in their bodies. Use Pedialyte UNFLAVORED for kittens/cats. I am assuming you are concerned with dehydration or diarrhea, as I do not have any information on your cat, I can not help you with how much to give it, how often, if it should be mixed with formula/food/etc. I can tell you that there is a lot of information on this on the web. Do a quick google search such as &quot;Pedialyte for kittens&quot; or &quot;Pedialyte to treat _____ in kittens/cats&quot; or whatever you need it for. Read up on a few sites that are legit and follow the treatment path you feel is best for your little furry friend.
by Kristina1059
Helpful?
3 Answers

1. Hi Nancy! We do not offer unflavored Pedialyte without sugar. Dextrose is the carbohydrate/sugar used in Pedialyte and it is designed with a balance of sugar and electrolytes to help prevent mild to moderate dehydration. ~The Pedialyte Team
by Abbott Nutrition Team
Helpful?
1 Answer

1. Great question! We haven't done studies yet on pets using Pedialyte, so make sure to talk to your vet! ~The Pedialyte Team
by Abbott Nutrition Team
Helpful?
1 Answer