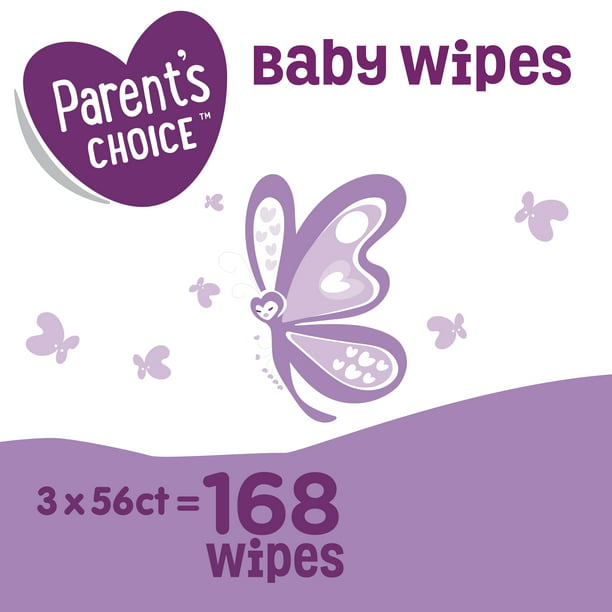 Warning - Choking Hazard - Children Under 3
This toy is not suitable for ages under 3 years. It contains one or more of the following items marbles; small ball; or small parts.
We aim to show you accurate product information. Manufacturers, suppliers and others provide what you see here, and we have not verified it.

Clean up messes quickly with Parent's Choice Baby Wipes. Our unique cloth-like wipes are strong, yet very soft. Each wipe is moistened with a mild cleansing solution that is even gentle enough for use on baby's face and hands. The container design ensures that each wipe comes out easily and is ready to use on any part of a baby's delicate skin. These wipes come in a three pack with 56 wipes in each pack. Store one pack in your diaper bag, one in your kitchen, and one in your car to be prepared for a mess wherever you and your child may be. Clean your child's hands and mouth after a messy meal, their behind after a diaper change, and their chin after a spit-up. Dermatologically-tested and free of alcohol and fragrance, these wipes are suitable for sensitive skin. Freshen up your little one with Parent's Choice Baby Wipes.

Since 1998, Walmart's Parent's Choice has been trusted by parents across the country to provide quality, affordable baby products. We offer a wide range of products including diapers, wipes, toiletries, baby food, formula and baby feeding products. With a quality guarantee to back up all its baby, toddler, infant and newborn products, Parent's Choice takes care of your little one's needs for less.

To avoid suffocation, keep plastic bags away from children and pets.

Instructions: Do not flush. Store at room temperature. Dispose of used wipes in trash receptacle. Keep lid closed when not in use.

These are very convenient to use. The bag itself is the dispenser, but I mostly just remove them from the bags and put them in our dispenser box that we reuse. These don't have any weird odor to them and they are economical. Even though my kids are no longer babies, we still use them daily for quick wash ups, and my 6 year old prefers these to toilet paper when he does a #2 so he uses them frequently. I acutally don't mind either, I think they do a better job of cleaning than he could with just toilet paper.

Works well and comes in plenty in this 3 pack Baby Wipes. I like that it is fragrance free. Yes, I recommend and the price is good!

Works. Its good quality. Itâs cheap. I cant complain. I always buy this weekly for my baby. I should invest in a big box of parents choice but when youâre low on money and you cant, this is truly a lifesaver.

I recieved a variety of wipes from baby showers. But these are the softest and the best wipes Iâve used. The price point is fantastic!

They are a nice strong thick wipe. I was pleasantly surprised.

Love the price, not the lint

This is the best value wipe on the market. I use these in my classroom because I can get more wipes for less. The price is awesome! (I just dont like the lint residue it leaves behind). I wish these were more similar to the sensitive wipes parents choice makes (the grooves on the wipe grips well). I have used every wipe out there being a daycare teacher for 8 years and found these were the EXACT same wipes as Aldi brand and Kroger only the price is better!

I will never buy these again! For one they feel rough and are not soft at all. They also leave a residue and lint on your skin, like little fuzzies. I would much rather spend money on pampers wipes like I had been rather than use these anymore

I have been using these parents choice baby wipes fragrance free for many years until recently July 2019. The wipes have left so much lints on my hands :( Not sure why they have to change the ingredients. Please bring it back the old ones!

We accidentally bought these one time instead of the light purple sensitive ones. Well, just into the first package of them, my son started complaining that's his butt was hurting. So much so that after over a week of waking up crying in the night, and no diaper rash cream working, we took him to the dr. He ended up having been a bad yeast infection which needed medicated cream. At this point we already switched wipe brands. It cleared up almost instantly. I decided not to keep using them, but instead of waste them, I would use them. I used them 2 days, only to break out in a similar irritation as my son. We do not have overly sensitive skin either. I will not be buying these again