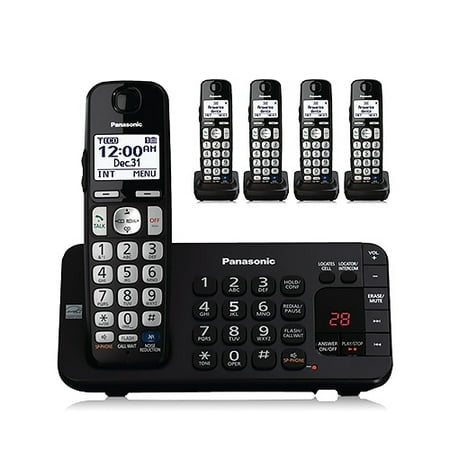 Or get it by Wed, Feb 26 with faster delivery 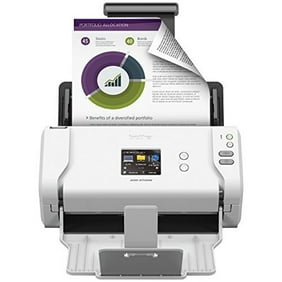 We aim to show you accurate product information. Manufacturers, suppliers and others provide what you see here, and we have not verified it.
The Panasonic KX-TGE245B Digital Cordless Answering System uses advanced features, such as DECT 6.0 plus technology, giving it the ability to locate a cell phone and connect with it. This allows you to send text messages and receive talking text alerts using these phones. The Panasonic cordless answering system with five handsets also includes easy-to-use big buttons, helping you see better and reduce wrong number dialing. Its large, 1.8", white, backlit handset display also shows the caller ID and other features clearly.

We purchased these phones about a year ago to replace another set of Panasonic cordless phones. We LOVE them, and with 5 phones we can have them all over, even on the patio. I will always use Panasonic products, especially the phones. They have all the features and are easy to use. They store all our numbers for family, friends and even a few restaurants and other businesses. Don't hesitate to purchase any Panasonic product!

For several years, we had a lower-end version of this digital cordless phone system and were very pleased with it. We had bought that lower-end model because at the time we had a good, separate answering machine that we wanted to keep using. But that answering machine recently died. We went looking for a Panasonic model that including an answering system. We found it in the KX-TGE245B. Phone system and answering system work great, and we especially like the 250-call-block capacity (older version could block only 30 calls), as we get many marketing/robo calls. And, in settings, you can select whether you want to hear a single ring when a blocked call arrives, or no ring at all before the unwanted caller is blocked. And you can also store ranges of numbers that you want blocked -- such as area codes. Phonebook stores up to 100 names/numbers. The handsets are very comfortable to use. This version has a lot of features, some of which we won't use. But the answering system and call blocking capacity are well worth every penny we invested in this phone. We shopped around, but the online Walmart price was the lowest we found for this model. Free shipping, and it arrived in about 5 business days. Very happy with both the phone system and Walmart service.

These phones replaced an older version in which the voicemail stopped working. It was maybe 15 years old. I was initially concerned about the size of the base but that has not been an issue. I love being able to hear messages from all handsets. The caller ID is very understandable, much improved from older model. It's easier to play messages and save them and see how many are saved. I have had no complaints about the quality of the sound of my voice from callers and I can hear callers well. The set up was a snap, just plug it in and it works. I wish this model offered a 4 handset option since that is what I really needed. I will have to get an add on at some point. Plus it came with a paper instruction booklet that I keep handy for future reference as questions arise.

This phone will alow you to block up to 250 numbers and/or area-codes. (the area-code block is called "blocking a range of numbers"). I have blocked both individual numbers and area-codes and it works great. I also unplugged the base unit from the power to test its ability to work in a power outage and it worked fine.

I bought this phone to replace a 5.8 phone that did not have that great of audio quality or range within my house. It also picked up interference from things in my kitchen. This 6.0 Panasonic does a much better job with distance, audio quality and no noticeable interference. It has more features than I expected on a cordless phone: 100 number index, a handset speakerphone, Cellphone Locator, automatic ECO mode, standard AAA NiMH rechargeable batteries that don't hold a memory, up to 4 accessory Key Locators can be used, compatible with Panasonic's Range Extender and when in case of a power failure the base unit will draw off the handset battery in the cradle and you can still make calls using the other handsets in the system. When using a Panasonic 400 headset, audio quality is superb and leaves your hands free. Very good for long conversations or busy phone traffic. The answering machine is excellent and simple to operate and the key pad base with speakerphone is very handy at times. Often a complaint is about the Instruction Manual/Booklet. Panasonic makes everything very clear how to operate all functions of this phone. A big plus. Except for the rather low capacity 400mAh NiMH rechargeable batteries giving 4.5 hours continuous talk time(added 700mAh batteries on my main handset), it's a great phone system and I highly recommend it.

Written by a customer while visiting shop.panasonic.com
40

1. Yes. There is 3-way conference calling and call waiting
by isnfihgaopn
111
2. This item does not have 3 way calling or call waiting.
by CommunityAnswer
25
2 Answers

1. One line only
by isnfihgaopn
60
2. It is one line and additional headsets.
by CommunityAnswer
50
2 Answers

1. When a power failure occurs, the charged handset temporarily supplies power to the base unit. This allows you to make and receive calls using a handset during a power failure. Handset battery charge lasts 8 days max on standby, and 10 hours max in continuous use.
by isnfihgaopn
190
2. The phone has rechargeable battery.
by CommunityAnswer
123
2 Answers