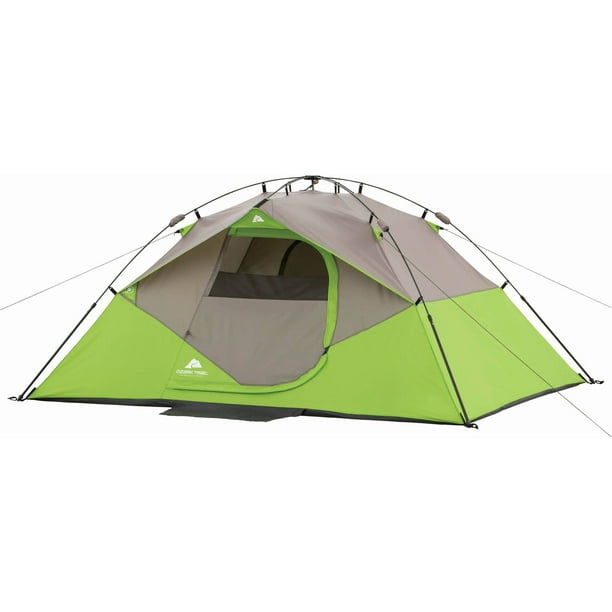 We aim to show you accurate product information. Manufacturers, suppliers and others provide what you see here, and we have not verified it.
The Ozark Trail Four-Person Instant Dome Tent sets up in 30 seconds! This four-person tent requires no assembly because the poles are pre-attached to the tent, just unfold and extend. It comfortably fits one queen airbed or up to four campers in sleeping bags on the floor. It includes an adjustable ground vent to keep the tent cool and comfortable. Stay organized and connected with multiple storage pockets, electrical port access, and a media pocket that fits most tablets.
Ozark Trail 9' x 7' Instant Dome Camping Tent, Sleeps 4: I love this little tent!

This little tent has gotten me through 3 week long camping trips now. It assembles in less than 10 minutes and stays weather tight. It has held up perfectly in heavy rain, high winds, and below freezing nights. The rain fly does its job very well and I have not had any issues with rain or wind getting into the tent. I did upgrade the stakes to more sturdy ones to provide a little more "tie-down" strength. Only downside is that I have no idea how youre supposed to fit 4 people. This will comfortably sleep 2 on a queen size air mattress with enough room for a cooler and backpacks... but standing up is not an option.

I purchased this tent with the hope that it would be easy enough to set-up alone if I needed to. On a recent camping trip with friends I was the first person to arrive at our shared site. I was able to set this tent up all by myself in 5 minutes, it was the first time I had set it up. It took even less to take it down. It was perfect for me with a twin air mattress. It would be snug with a queen and I couldn't stand-up completely but I'm okay with that. It's just me any way.

Tent sets up in under a minute, packs back into the original container with ease and travels well on my motorcycles. Stormed my second night camping and it was water tight to.

i had my first Ozark Trail tent for about 15 years. it has weathered extreme rain and extreme heat and wind. i live in the Caribbean and when we go camping its really roughing it. because of the durability and comfort of my experience, i have chosen Ozark Train again. the only difference is my last tent was a 9' x 16' size so there was a lot of headroom. i had chosen that because it was the best choice for a family tent. this one is a four person so the headroom fit is ideal. but i would choose Ozark Trail any time

Easy setup and take down

Bought this for my 12 year old daughter to use. Setup and take down was fast an easy. Only con is the tent stakes that come with it are very thin and bent easily trying to put them into the Alabama soil. We'll be investing in a sturdier set.