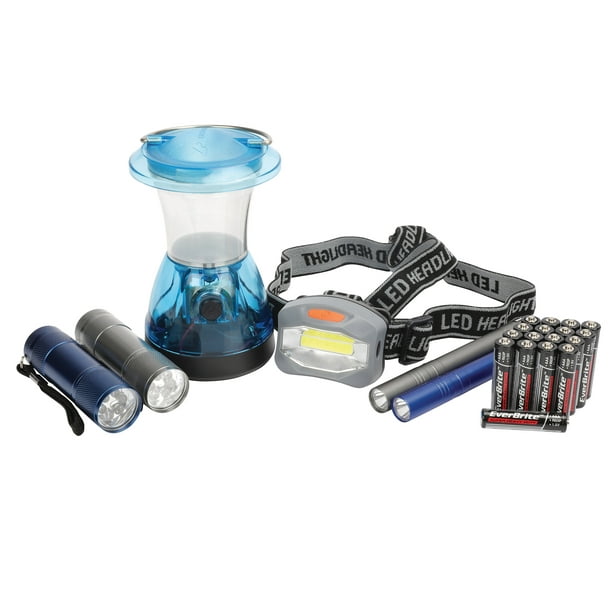 Should Be a Staple In Every Home

I received this item free to write a review. I also received another 6 piece Ozark set to review and I must say the quality of both are great. They also both include name brand batteries to power each and every light. This set comes with a lantern, a head lamp, 2 pen lights, and 2 led flashlights. the lantern has 3 modes: Regular lantern, lower solid blue light, lower blinking blue light. The head lamp has 3 modes as well: Bright light, dim light, and strobe light. The other flash lights and pen lights have a standard ON/OFF mode. These led lights are bright and have hours of power from the batteries. I keep these in my home and in my vehicle. Living in the south, we tend to lose power a lot with thunderstorms and/or hurricanes, etc. So these are awesome and safer to add to lighting versus your old school candles that cause smoke and a fire hazard. I highly recommend all of the Ozark lighting products as I have used and tested all of them!! High quality and great deal because name brand batteries are not cheap!!

This set has everything you would need lighting wise. It's all contained in compact sizes so it's easy to store and travel with. The lantern and flashlight are great for adding to your camping or hiking gear to use outdoors. They are handy to keep in your toolbox at home too. The headlamp is great for working in places that don't have great lighting such as under the sink or behind appliances. No more having someone hold the flashlight! We love Ozark Trail and purchase their products a lot. We definitely trust the quality and these are no exception. Definitely satisfied and highly recommend!

This is a perfect little set whether you are an outdoorsy person or not. It works perfectly fine for me on a daily basis. I was really surprised when I saw that the batteries came with the set, nowadays for the most things that you buy , you have to buy your own batteries. This little set includes a mini lantern that flashes white light or blue light. Two pencil thin flashlights, 2 regular small flashlights and a head flashlight with an adjustable stretchy head band. I use this set practically every day. I have both flashlights hanging on my key chain so I can see where my locket is at when opening the door. The headpiece I use whenever walking my dog at night, as well as a small lantern that I carry in my hands. And the small pencil like flashlights are a nice thing to have whether you are trying to get under the sink and see where that leak is coming from or whenever you check your car oil. It is all bright enough for most of the projects, big or small!

I received the Ozark Trail 6-piece flashlight & headlamp & lantern & penlight combination. This is a camping package that is so cool! It has a bunch of different lights in it. It has an LED mini lantern, LED headlamp, two LED flashlights, and two LED penlights. It also comes with 17 AAA batteries so you won't need to purchase those. All of the headlights and lanterns have three different light modes. All of the lights have a 2-3 hour hold time so you will be able to use them for a long period of time. They will be perfect for when the sim goes down while your camping. These lights will allow you to see when it gets dark and you may not be able to see much. You also may be able to use these item in different situations. You could put a couple of these lights in your car to have on hand in case you have a breakdown after dark or are just in need of a light at any point in time. Besides being in your car you could even put them on your car keys chain. That way even if you're not around your car you will still have some light if you need it in an emergency. I do recommend these camping lights to anyone. They are fairly cheap and very easy to use.