This item is gift eligible
Gifting note:Arrives in packaging that may reveal what's inside. To ship it in a Walmart box, mark your order as a gift in cart.
Sold & shipped byWalmart 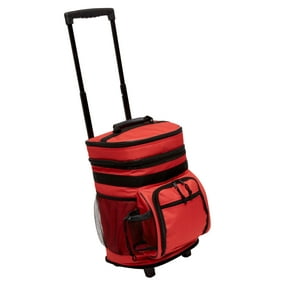 We aim to show you accurate product information. Manufacturers, suppliers and others provide what you see here, and we have not verified it.
Having fresh, frozen-solid ice is an essential on any warm, sunny day out in the great outdoors, and with an Ozark Trail 26 Quart High-Performance Roto-Molded Cooler, you can feel confident knowing you'll have exactly that. This high-performance cooler keeps ice for more than 4.5 days at a time and features a heavy-duty, seamless, one-piece construction that is virtually unbreakable and built to last. Its premium insulation and rugged construction are complemented by a whole range of additional features, like a stainless steel locking plate with a built-in bottle opener, T-handle latches, two drink holders, a built-in fish ruler, and a heavy-duty stainless steel handle with comfort grip for easy carrying. Whether you're out in the woods, out on the lake in your boat, or kicking back at the beach, you can keep cool with the Ozark Trail 26 Quart High-Performance Roto-Molded Cooler. 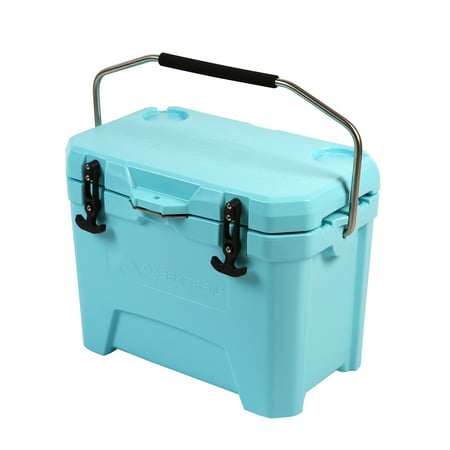 Not for the weak!

To start this is a heavy duty no messing around Cooler! I seen complaints about how hard it is to unlatch it. Yes you need a little strength but if you drop this cooler or knock it over the contents inside will not come out and get dirty all over the campsite ground which has happen to me many times.

The seals on this are amazing! Very thick seals and quality made that will keep water from coming out or hot hair from entering into the cooler.

There is a 17 inch ruler on top which is nice if you are fishing and want to know real fast if your fish is bigger than your buddies or family member.

The exterior material is extremely well made to withstand even a bear attack if you happen to be camping in area with bears!! There is a area where you can attach a lock which can be nice if you leave your cooler out on the picnic table it will deter someone taking it or can lock it to the table.

I haven't had a chance to see how many days the ice will last on a hot day due to the fact I live in Michigan and it's 35 degrees right now and we're quarantined due to the Coronavirus. But based on the quality that I can see and feel I don't think that will be a problem. If I get two days of holding ice that is plenty for me but based on what the cooler says 4.5 I'm sure it should get close. Keep in mind though if you have four beers in there and nothing else,that will affect the time it holds the ice from melting.

I like the gray and orange color combination also versus the old white or blue,green etc. The material is nice enough that it will not hold dirt like some plastics that have a textured surface. Personally I think I will have many good years to come with this.

I have been wanting to try one of the "High Performance" coolers. This one earns the name. I received it from the carrier and brought it into the house. Opened it up and went to open the lid and check it out. I couldn't get the lid open no matter how hard I tried. Finally I got a pry tool from my tool box and pried the lid at the metal part of the latch. Then I heard a "whoosing" sound like opening a new can of coffee. Then I realized that the cooler had a vacuum on it and was sealed tight. Obviously part of the journey to me must have been by air and it sealed itself. If it will hold a vacuum, water spillage should never be a problem.

I filled it partly with ice and went grocery shopping. It kept even frozen biscuits rock hard frozen. After several stops and opening and closing the cooler many times, I left the ice in it to see how long it would last. I have attached pictures from day 1 and day 4. Filled properly as the maker recommends, I think it would last the 5 days claimed no problem.

It has a well padded metal handle and tight closing latches with a place for a lock if you need it. I think it will last for many years.

The Ozark Trail 26-Quart High-Performance Cooler as the name implies is Walmart's own roto-molded (short for rotational molding) cooler geared for those needing better cooling. So what's the difference from a regular cooler? Well the main difference would be an additional two to three days. Most coolers would last you a couple of days meaning that a regular weekend outdoor trip would fall within a regular cooler's specifications. But what if you are going out on a longer trip? Obviously, a regular cooler won't cut it. Here come roto molded coolers. Roto molded coolers are designed to keep food and other stuff longer which is usually around five days. Well one can argue that you can argue that you can always add ice. But what if you are in the middle of the ocean on a fishing trip or a place where the nearest store is 50 miles away? Then a roto molded cooler is the perfect cooler for this need as it can store ice around five day. Seven in some cases.

The design of this roto molded cooler is one piece for the main body and another piece for the cover. It has rubber seals and are closed by using steel hinges and t-handle latches so that it gives you an almost airtight seal making ice last longer. That said, the extra cooling properties of this cooler makes it larger and heavier. Also, the process in making it takes longer also adds to its price. So that said, are the extra “cons” still worth it? Definitely yes! If long lasting cooling is your main priority, then this is the perfect cooler for you. And also, roto molded coolers are tough and leak proof making this last a lifetime. I would strongly recommend this to those looking for a high performance cooler.

Shipping was delayed so I could not use it on my trip but after thorough look I think it is great. It is very sturdy with good insulation. The elastic holdowns are effective and easy to use even for me (88 years old). It also has a strong provision for a padlock , I think in some situations it could be used as a strongbox. It has been tested and shown to be bear resistant ,it certainly would prevent entry to any other critters like Racoons. The carry handle is strong and comfortable. We have had many ice chests over the years for travel, camping, boating etc. This is the best I have seen. It might be a bit heavy when loaded for some uses. The included packing guide is interesting and useful. The website photos are complete but I have included a couple.

Let me first and foremost say that I don't typically use a cooler more than a day or two. I do day use 90% of the time and my test is NOT based on following the directions to fully pack the cooler to get 4+ days out of it. I put 12, 12 oz cans and 8, 12 oz bottles of soda in the bottom. I then put one 10 lb bag of ice on top of everything. I closed the lid and did not reopen for 24 hrs. I had plenty of ice after 24 hrs. At 48 hour check, the ice was gone and the water was fairly cold yet. That's all I did and I'm pleased with that. The cooler sat in my garage, at an indoor temp of about 70°. I only opened it at 24 and 48 hours. For what I'd use this for, I was happy.

1. I think originally they were white. We bought the smaller one on clearance and it is white. All others I have seen since are grey.
by Sc0000ter
Helpful?
2. In limited stores I've seen "carolina sky blue". I've also asked that question here but more interested to know if the blue is a store exclusive or just a rare find.
by Bluh2oeyes
Helpful?
3. Hi Odom, the available colors online are currently: grey, nomad, marine blue and white. Thanks for your question!
by ManufacturerSupport
Helpful?
3 Answers

1. This does not have a basket.
by CommunityAnswer
Helpful?
2. Hi Belinda, great question! Currently there is not a basket available from the manufacturer which fits this cooler. Thanks for your feedback though and I will be sure to forward this suggestion on to the team.
by ManufacturerSupport
Helpful?
2 Answers