OtterArmor Microbial Defense protects the case from many common germs. It does not protect you, the screen, printed graphic, or holster.
Source: The NPD Group/Consumer Tracking Service, US, January 2015 – June 2018 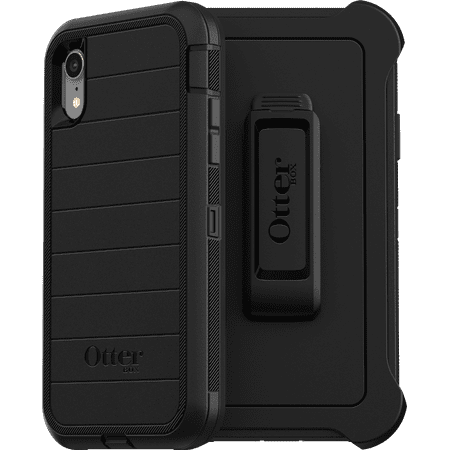 Purchased about 2 weeks ago, the case makes me feel like my phone is well protected. The had dropped my last case several times and the cases was falling apart. I'm glad a friend told me about Otter case. They need to provide instructions on how to use.

This is the case you will see a lot of police officers, firefighters, EMS workers, etc. using. It has become the gold standard for rugged cases and for good reason. I have always liked the Defender but I never liked the built in screen protector, which made the screen less responsive and felt cheap.

The Defender Pro eliminates the screen protector, which in my opinion is a bonus. This is still a large, bulky case. It is tough to put into a front jeans pocket but it will slide in and out of a back pocket relatively easily. At work, I carry mine in the left cargo pocket of my Class B BDU pants and it doesn't feel bulky at all.

I don't really use the belt clip very often but I have found the desk stand function of the belt clip useful when I'm sitting at home and want to watch a video on my phone. Otherwise, it lives in my desk as it adds even more bulk to an already bulky case. If belt carry is your thing, it should be noted that the case can rotate 360 degrees on your belt through 12 detents for vertical, horizontal or canted carry options.

Overall, this is a great case as long as you understand that it is going to add considerable bulk to your phone. But, if you work in an emergency service field or similar field where bumps and drops are a daily occurrence, you can't really go wrong with the Defender Pro.

I love the otterbox case on my IPhone , had it on my IPhone 8plus. It kept it looking new the two years I used it. So I knew I had to have one for my new IPhone XR . Next time I will not pay $30.00 for next day when it takes over 5 days to get . I'll get it from a store in town,

I have used and loved Otterbox in the past, and I still admire their products to this day. I recently ordered a pretty blue case for my iPhone XR for my new phone, and it's been great! It's awesome quality, it has wonderful protection, fast shipping, and perfect for a parent on the go. :) I highly recommend their cases~ You won't regret it!!

1. The case is 8" long.
by CommunityAnswer
Helpful?
1 Answer

1. Yes, charging pad can still be used with case is installed on the phone.
by CommunityAnswer
Helpful?
1 Answer