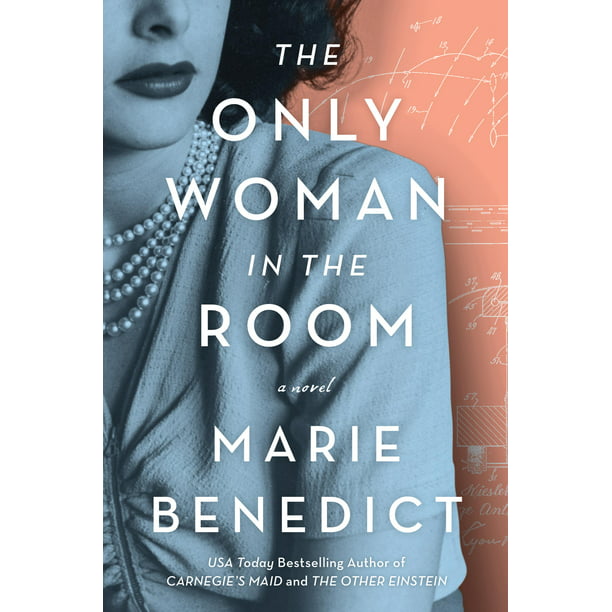 Only Woman in the Room, The Her beauty almost certainly saved her from the rising Nazi party and led to marriage with an Austrian arms dealer. Underestimated in everything else, she overheard the Third Reich's plans while at her husband's side, understanding more than anyone would guess. She devised a plan to flee in disguise from their castle, and the whirlwind escape landed her in Hollywood. She became Hedy Lamarr, screen star.

But she kept a secret more shocking than her heritage or her marriage: she was a scientist. And she knew a few secrets about the enemy. She had an idea that might help the country fight the Nazis...if anyone would listen to her.

A powerful novel based on the incredible true story of the glamour icon and scientist whose groundbreaking invention revolutionized modern communication, The Only Woman in the Room is a masterpiece.

The Only Woman in the Room

Hedy Lamarr - Hollywood Star of the glorious 1940s with an unknown past. She grew up in Vienna where she had her first successful performances which attracted the attention of Fritz Mandl, an influential military arms manufacturer. Being Jewish wasn't that big a problem at the time, but her father already felt that refusing a man like Mandl added to their religion wasn't a good idea and thus, she first accepted the invitation to dinner and finally married him. But soon after their honeymoon, things changed drastically and the only role she was allowed to play was that of the silent wife who was nice to look at. What her husband did underestimate was her quick wit and her capacity of listening. And listen she did when he met the big players who prepared for a new world order with the help of her husband's weapons. After her successful escape to the US, she used her intelligence and her knowledge for revenge: she developed a radio guidance system for torpedoes. Admittedly, I had never heard of Hedy Lamarr before starting to read the novel. And even at the beginning I supposed the protagonist was simply a fictional character. When I became aware of the actual background, the woman's life felt even more impressive than just the narration which I already liked a lot. The actress is the narrator and centre of the novel and it does not take too long for the reader to figure out that she isn't just the nice face and talented actress but a smart woman interested in everyday politics with a sharp and alert mind. She follows her father's line of thoughts about Mandl's advances and understands that she isn't in a position to freely decide. The way she planned her escape shows not only how clever she can plot but also her courage. In America she is first reduced to the beautiful actress and it surely hit her hard when her invention was refused by the navy. If it rally was because she was a woman as the novel suggests or if there were other motives doesn't really matter - she wasn't recognised for what she was, but only for what people saw in her. Hopefully narratives of these kind of women help to change the mind of those who still believe that the looks go hand in hand with a simple mind.

Starting with Hedy Lamarr as a 19-year-old Austrian actress known as Hedy Kiesler, we see Hedy's life during the escalation of Germany's take over of Europe. Hoping to keep herself and her family safe she marries arms manufacturer and dealer Fritz Mandl to whom she is a trophy wife. After escaping a marriage that becomes unbearable Hedy gets to the US where she becomes Hedy Lamarr, Hollywood actress. Worrying about what she overheard in Austria but did not act upon, she develops a torpedo system for the Navy which is rejected. That technology is used to create wi-fi that we use today. Hedy led an interesting life. She is caught up in the lead up to WWII and meets many historical people through her marriage. When she escapes she comes to Hollywood and resumes acting. She is intelligent but, unfortunately, is not recognized for her intelligence. I liked her. She was fascinating and talented on so many levels. She is a role model. I enjoyed this book. I finished it in one day because I was so caught up in the story. I loved the first person point-of-view. This is a keeper.

Reviewed by Sheila1957Sheila1957
Written by a librarything.com customer.
Helpful?
Average Rating:(5.0)out of 5 stars

I really enjoyed Marie benedict's two previous books CARNEGIE'S MAID and THE OTHER EINSTEIN so was looking forward to her take on Hedy Lamarr. I was NOT disappointed as she delivered the compelling story of Hedy Lamarr. Benedict brought to life the little known history of one of the world's most beautiful women and, more importantly, highly intelligent women. Hedwig Kiestler was born in Austria to a Jewish mother and father. While performing the role of Empress Sisi, she came to the attention of the munitions magnate Fritz Mandl. After a short courtship, his proposal of marriage was seen as a way to protect Hedy from the growing anti-Semitism of the time. Mandl spoke openly to Hedy about the armaments and munitions he sold. Always the curious one, Hedy read as much as she could about the arms her husband sold and listened in on conversations he held with business partners. The men never imagined that this beautiful woman had any interest in or understood their conversations. Mandl became more and more controlling and Hedy knew she had to escape his powerful clutches. She flees to England and then to Hollywood where Jewish actors and actresses were fleeing to as they could not perform in Europe. She quickly becomes one of the highest paid performers and is dubbed the most beautiful woman in the world. But over her hangs a cloud of guilt. Knowing what she did, could she have prevented some of the senseless deaths of European Jews? She now draws on her scientific knowledge to develop equipment to shorten the war thus saving lives. But her real challenge is getting someone to listen to her. This is a commanding novel based on the true story of actress Hedy Lamarr whose patented idea laid the foundation for secure communications and cellphone technology. The story was so riveting I flew through the pages losing all track of time. This is a story not to be forgotten.

Reviewed by BettyTaylor56BettyTaylor56
Written by a librarything.com customer.
Helpful?
Average Rating:(5.0)out of 5 stars

Hedy Lamarr was a lady...

Hedy Lamarr was a lady with many faces. She was raised in Austria. She became a well-known actress with a risqué movie to her credit. Then she was wooed by an arms dealer. To help protect her family, she marries him. She literally became a prisoner in her own home. She overhears many discussions and secrets. At this time in her life, she has no idea what to do with these secrets. Then, she finally escapes! It took a few failed attempts with severe consequences. Marie Benedict did a fantastic job with Hedy Lamarr. I knew a little about her but, apparently, not enough. What a strong, amazing woman. She escapes an abusive husband, takes on Hollywood, and creates a communications marvel to help take on the Nazis. How did I not know this! I love strong women. Hedy Lamarr just topped the list. I love Marie Benedict! She always teaches me something. I have read all her books and this is her best. And I have given her other books 5 stars! But this one....oh boy!

Reviewed by fredreecafredreeca
Written by a librarything.com customer.
Helpful?
Average Rating:(4.0)out of 5 stars

May 17, 1933, Vienna, Austria, Hedwig Kiesler had just given an extraordinary performance which was appreciated by all but especially by Austria's richest man, the Industrialist, Friedrich Mandl. Austria is in a very precarious position and the fear of invasion by Hitler is very real. Hedy and her family reside in Dobling, a Jewish neighborhood, which would undoubtedly be targeted if and when an invasion takes place. Hedy's father encouraged her to entertain Mandy's affection in the hope that it will keep Hedy and her parents safe. Mandl dictated everything including which dress she will wear to her wedding, the venue and all the wedding plans, their dinner party menus, their life. Unfortunately marriage to an insanely jealous, powerful, politically connected man does not make for a happy fairy tale. Marie Benedict does an admirable job of describing the circumstances which forced Hedy Kiesler Mandl to plot, flee and recreate herself to survive. The trip to the United States from London aboard the SS Normandie and her subsequent meeting with Louis B Mayer and his wife, Margaret rechristened her Hedy Lamarr. Her shrewd negotiating led to an MGM contract higher in value than thought possible. I had read a bit about Hedy Lamarr and so was informed about her scientific knowledge and her inventions. The marginalization of her ideas and inventions by the military and the men who who were in control was less than surprising. The problem area for me was the survivor's guilt issue which was repeated more than I thought necessary. I also found it interesting that no time or attention was given to her later life and her decline. The ending was a bit of a left turn for me. This was just a short hair from 4 stars but I am rounding up for the abundant research and the excellent writing. Thank you NetGalley and Sourcebooks Landmark for a copy.