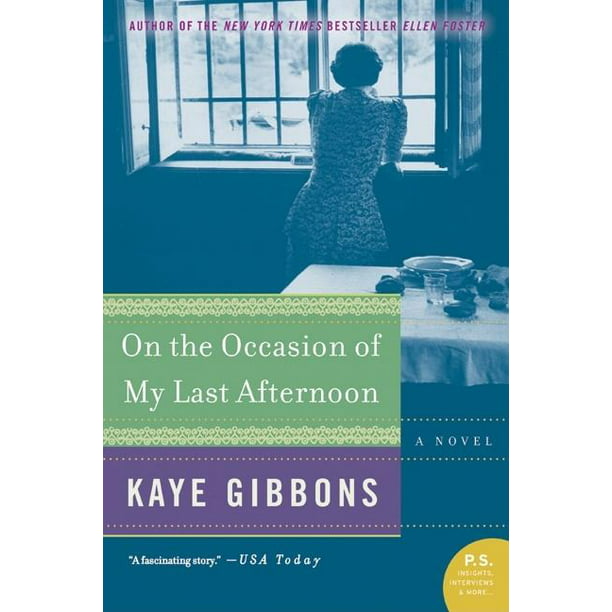 On the Occasion of My Last Afternoon (Paperback)

Emma Garnet Tate Lowell, a plantation owner's daughter, grows up in a privileged lifestyle, but it's not all roses. Her family's prosperity is linked to the institution of slavery, and Clarice, a close and trusted family servant, exposes Emma to the truth and history of their plantation and how it brutally affected the slave population.

Her father, Samuel P. Tate, has an aggressive and overpowering persona that intimidates many people -- including Emma. But she refuses to conform to his ideals and marries a prominent young doctor. Together they face the horrors of the Civil War, nursing wounded soldiers, as Emma begins the long journey toward her own recovery from the terrible forces that shaped her father's life.

This P.S. edition features an extra 16 pages of insights into the book, including author interviews, recommended reading, and more.On the Occasion of My Last Afternoon (Paperback)

This is my first foray...

This is my first foray into a Kaye Gibbons book. Gibbons portrayal of an elderly woman's musing about her life stuck all the right chords with me. The tone is muted, reflective in nature but there are no rose-coloured glasses at work here. The Tate family, under the rule of Emma's bigoted, self-made father is dysfunctional, so it comes as no surprise that Emma seeks escape in a marriage to a doctor from a well-to-do Boston family. Gibbons may have been a bit extreme in her portrayal of Emma's tyrannical father (a man Emma's sister tries to explain by saying "''You know he thinks he himself is the South,'') and her mother's quiet acquiescence to his raving demands, but even that effect is dulled down by the portrayal of the ravages the Civil War inflicted on everything and everyone in its path. Through it all, Clarice is the skilled navigator of choppy waters and it is her wisdom that shines through in this story: "We knew what she believed to be moral, and while at the top of her list was eliminating slavery, she did not interfere in its flourishing. Her mission was not to change history but to help both white and black prevail over the circumstances of living in that place, the South, in our time. She worked with the consequences dealt her by others, in the travails of her race. She was not merely dignified, and to label her such would be not an error of judgement but one of degree. No, she was dignity herself." As summarized by one reviewer, this novel is "above all, a story of how Southern women suffered and endured the deprivations of the home front during the Civil War. But it is so much more." A worthy read, IMO.

Reviewed by lkernaghlkernagh
Written by a librarything.com customer.
Helpful?
Average Rating:(5.0)out of 5 stars

My first book finished in 2016 and my first 5-star rating. A wonderful account of life in the South in the time leading up to and through the horrible Civil War. Not a battle view look - but a look through a flawed family's eyes. Poignant and sad, and a little hard to follow at times, I admire the writing and will soon read more by this uber-talented writer.

Reviewed by repbrepb
Written by a librarything.com customer.
Helpful?
Average Rating:(4.0)out of 5 stars

A beautifully written account of a strong southern woman who, after being abused by her father in her childhood, learns compassion and healing for soldiers during the Civil War. The last line stays with me: "This has been such a glorious afternoon -- my heart would not weep if I did not live to see another."

Reviewed by cataylorcataylor
Written by a librarything.com customer.
Helpful?
Average Rating:(4.0)out of 5 stars

Loved the title, liked the book.

Reviewed by VashonJimVashonJim
Written by a librarything.com customer.
Helpful?
Average Rating:(3.0)out of 5 stars

Pre-Civil War south a family is ruled by an arrogant and insensitive father, with a past that would destroy his family and their achievements. Very well written and a look at a side of the Civil War that I've never seen.

Reviewed by meerkameerka
Written by a librarything.com customer.
Helpful?