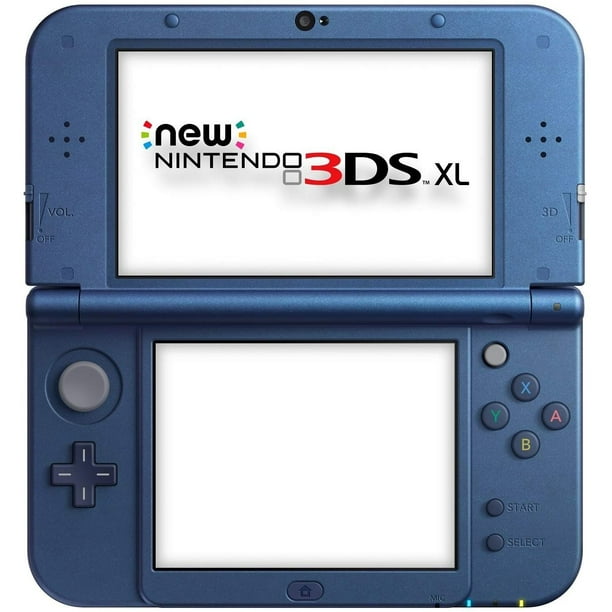 We aim to show you accurate product information. Manufacturers, suppliers and others provide what you see here, and we have not verified it.
The New Nintendo 3DS XL Galaxy Style brings kids the next dimension in entertainment. It combines a fun mobile experience with reliably stable 3D technology and added control features that little ones can enjoy using at home or on the go. They can take 3D photos with the 3DS Galaxy style and connect with friends to enhance adventures with added Amiibo support. This unit plays all DS games as well, although they will not appear in 3D. The AC adapter is sold separately, and this portable Nintendo game system uses the same one as Nintendo DSi, Nintendo 3DS and 2DS. With a compact size, it's easy for kids to grip as they play their favorite games. This toy can make a thoughtful gift for a child who enjoys playing video games. The large screens allow for optimal visibility so kids can easily view their games.It will fold closed for easy storage when not being used to keep little ones entertained. This New Nintendo 3DS XL Galaxy Style is recommended for children ages 7 and up to play with.

What others said when purchasing this item
Birthday request
Cheryl, purchased on August 9, 2020

Well, what can I say? It's a New 3DS XL, which means it has just about all you want from a hand held system. You can play your old DS and 3DS games, plus with the added power of the new system you can play those few titles that need the extra boost of the stronger processor. The 3D effect is cool, a bit of a gimmick in my opinion, but it does work much better on these new systems than when first implemented. The C stick is nice, though not a true analog stick, more just a pressure sensitive nub that you nudge this way or that without it actually moving. Two extra shoulder buttons and Amiibo support out of the box. You can download games and use the Internet, watch videos on YouTube apps and much more. Though, if you plan on downloading a lot of stuff you may want a bigger Micro SD card, the one included is only 4GB, not bad for just games and an app or two, but if you want to download full titles it will fill up quick. As per the norm nowadays for DS systems there is no charger included, I think a pretty bogus move on Nintendo's part, but that's the way they roll now. There are many ways to get one but still, for a $200 hand held you should be able to use it as is out of the box.

The system was bought for a grown up...me. I love it. It has a beautiful galaxy coloring that looks very nice in person. It's the new 3DS so the stylus and cartridge are located at the bottom instead of top, which I don't mind. Overall I'm very satisfied.

So far, I'm really happy with this DS. This was my upgrade from a regular old 3DS, so the bigger screen was the biggest draw for me. It runs really smoothly and for the most part I like the changes in design they've made. (Particularly having a stylus that doesn't fall out nearly every time you tilt the DS the wrong way.) The battery life also seems to last much longer. I've had one glitch occur while playing Story of Seasons, which I didn't encounter playing the game on my older system: occasionally while opening up a menu it will start scrolling down endlessly of its own volition. If I exit the menu and reopen it, that usually solves the problem--sometimes it takes a couple of tries. Anyway, it's a minor issue that doesn't interfere with gameplay. Other than that, I haven't had any issues with this New 3DS and it looks so pretty. I'm really satisfied with this purchase.

My son wanted this console since before Christmas and we were not fast enough to buy it. I was willing to pay more to other sellers but thankfully Walmart received some and I was able to get it. The Electronics Dept. attendant was so helpful, he suggested for me to purchase online and he would physically bring it to the online pickup desk for them to hold it for me before anyone else bought it. My son finally got his Xmas gift/birthday gift. Thank you Walmart for the personal attention. We had to buy the charger separately.

Best Portable until the Switch arrives.

Had to order this for my GF's daughter because her old 3DS charger connector broke and nowhere on the brick and mortar stores had it in stock during the holidays. We were going to Disney CA mid-January 2017 and had ordered it a week before our trip. We opted for the free shipping because paying $60 for Rush Delivery was way too much and even though she wanted it to arrive before our flight day it was notified that it would be delivered after we left. She was disappointed of course but we were super surprised that it actually arrived two days before the departure date! Great shipment and wonderful service!

Love the glossy metallic finish of the purple with the galaxy intergrated into it. Swapping and transferring my data from my original 3DS to the New 3DS XL was a breeze too.

My DD was very happy with the new 3DS. The games she wanted to play were only made for the 3DS so we upgraded her device and she picked this design which goes along with her love for Dr. Who. Great for boy or girl.

Cool device with tons of features!

Good 3DS, some features are different from the original 3DS. This doesn't come with a charger so you will need to order or buy one.

If you would like to share feedback with us about pricing, delivery or other customer service issues, please contact customer service directly.
1-3 of 20 questions
by FabianoOctober 10, 2016

1. This item comes with the charger.
by CommunityAnswer
Helpful?
2. yes has charger
by honey1
Helpful?
3. No. It does not come with a charger.
by nyira
Helpful?
4. if you zoom in the box picture, its in red letters in the bottom.; &quot;AC adapter is not included&quot; So NO it does not have a charger. Nintendo assume many people will be just updating from older versions and we need to keep chargers with many of us don&#39;t do.
by Darleenmr
Helpful?
5. in the About this item section it even says. &quot;The AC adapter is sold separately&quot;
by Vale
Helpful?
6. No it does not come with a charger
by Brandaman717
Helpful?
7. No. You have to buy the charger separately.
by Miguel
Helpful?
8. Pre installed with games, fishing game , shooting game, street pass to play finds me and puzzle quest.
by Friendly
Helpful?
9. No, you have to purchase the charger separately.
by Kelsey
Helpful?
10. No charger included
by TBird
Helpful?
11. No games or charger included
by TBird
Helpful?
11 Answers

1. This system does not come with any games.
by CommunityAnswer
Helpful?
2. It comes with one called FaceRaiders, it&#39;s a built in game of some sort. My 12 year old says it&#39;s kind of a kiddie game so he bought Pokemon Moon at Walmart as well. (Kids are into Pokemon I guess). Hope this helps. Need to buy charger, it does not come with a charger, but its inexpensive, like $10 to $12.
by HeliMom
Helpful?
3. No games are included.
by TBird
Helpful?
3 Answers