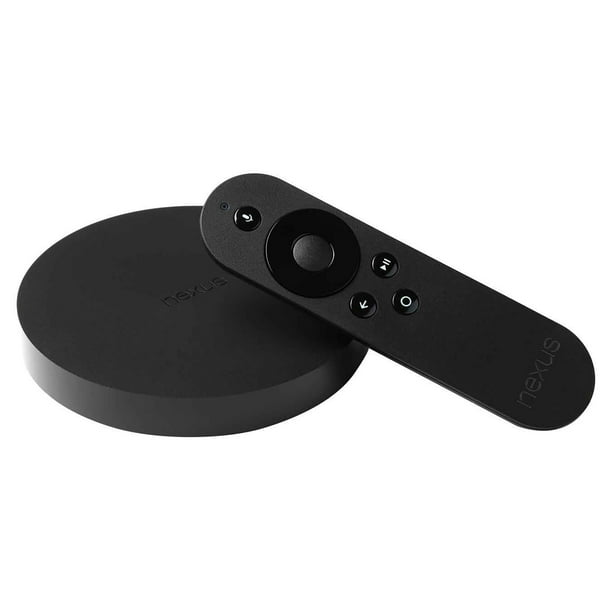 We aim to show you accurate product information. Manufacturers, suppliers and others provide what you see here, and we have not verified it.
Nexus Player is Google Cast Ready - Entertainment tailored for you! Cast your favorite entertainment apps, movies & TV shows, music, games, sports and more, from your Android or iOS device, Mac or Windows computer, or Chromebook to the TV. A world of content and apps - Watch a movie, listen to radio or queue up your favorite tune with Google Play and your favorite apps. Discover new favorites and quickly find what you want, Pick from personalized recommendations in your home screen, or just say what you want to see. Android gaming on the big screen - Discover immersive Android games on your HDTV with a gamepad. Plays nice with your other device - Cast your favorite entertainment from your Android or iOS mobile device.

I have used almost every single streaming box available (smart TV's, smart blu-ray players, Xbox 360, Xbox One, PS4, Roku 3, Chromecast, etc.) and Android TV has become my platform of choice. The performance is always great on these devices, and the interface is much more intuitive and good looking compared to options such as Roku. You have all your great streaming channels on Android TV (Netflix, Hulu, CinemaNow for Ultraviolet movies, etc.), except for Amazon Instant Video, which wasn't important to me considering it usually has similar content to Netflix. Wi-Fi performance is top notch via AC 5GHz Wi-Fi, videos starting almost instantly and I hardly ever saw buffering. The Nexus Player has improved considerably since released, and no longer is as buggy as many reviews would lead you to believe. If you have more money, I would get the NVIDIA Shield Android TV, which costs around $200 and is a considerably better product, but for only $50 at the time of this review, the Nexus Player is much better than a comparable Roku, Chromecast, Apple TV, or Fire TV.

I am endlessly impressed by this little device. Against all its competition, there isn't much you can't do on this, which is something you can't say about the competition. The price is just the icing on the cake. I've been on, in some capacity, almost the alternatives, including units I've built on my own from Raspberry Pis, Banana Pis and other various platforms. Today marks my third Nexus Player, easily the best solution I have found to date at the best price. This floors the original Google entrants utilizing Google TV (limited by the puzzling removal of the NDK), Apple TV units (just limited by design, unless you can get your hands on the old 2nd gen, despite being reduced to 720p), and all the smaller players utilizing their own custom operating systems (thereby restricting development to only those services with huge operating budgets as their players need to be re-coded, which unfortunately means many of the services you are looking for or may in the future will be unavailable). Sporting full Android TV, it is entirely possible to get most Android apps running on this device (although, obviously, tilt controls and a touch screen will not be present), and I have had success speaking directly to developers about expanding support for this device as, for most home media solutions, this often means a small tweak to the existing code to add support for this family of devices. If you install the Kodi App as well onto this thing (which will pick up the slack on what can't natively be done straight out of Android or one of its apps), you have a BEAST of a machine that can almost do it all. Additionally, this device supports most bluetooth devices, including remotes and keyboards, which is handy since getting a secondary remote for this thing is nigh impossible - I connected an Amazon Fire remote to this device so I can access it from the other end of the room, as well as a bluetooth keyboard which allows for configuration of some settings in the unit with significant ease (any device you would use could always be tweaked, and having a keyboard rather than navigating a virtual one with arrow keys is always super handy). Although the voice control is neat it is more gimmicky than anything, as it only really functions in very select scenarios. I still strongly believe the original Boxee Remote is, by far, the best entrant into this space as it gives you what you need until you need more, and then you just have to flip it over; you can find similar variations of this from third parties now, thankfully, which I would recommend if you would like or use a second remote. There are other units out there sporting full Android but not very many at this price - if you're looking for a work horse and have a little know how, this thing glows brighter than a pearl with a little shine. If not, if you know someone who does, buy two (one as a gift for them), and they'll make both your lives heaven for half the price. It's a little sad that Asus seems to have cast this project to the wayside - the units are becoming scarce. I guess at this price point the economics don't make a ton of sense to them, or they are perhaps returning to their business roots. There is a lot of pressure in the space from competitors (especially big money with an interest in crippling your alternatives), so it is really hard to say why these have been so hard to find for the last year. If you see one I would strongly suggest you snap one up.

This is th greatest device i bought in the last 10 years. I have an apple tv3 which i use it only for netflix and youtube. This device come with everything apple tv offers you and more. The quality might not be up to apple's but here is some extras you can have on this device Xbmc Itv (200 + live channels) Games you can play with a game pad (sold separetly) You ca use wireless keyboard ad mouse for browsing Thi product is highly recommended

Beats the ROKU 3 hands down! I love the fact you can play games on this device. Voice commands are state of the art and for 100 bucks you cant go wrong. The only MAJOR problem is that Google never added Ethernet port onto the back. The strangest thing about the ethernet is in the network setup there is actually a setup for ethernet...hmmm. I bought the ROKU 3 and quickly returned it once I bought this! One a side note to WALMART... This product wasnt anywhere on display in your store! I had to look for it behind the counter hiding near the floor, thankfully I knew this product was out but most shoppers wouldnt know that! Put it on the shelf and you might sell a few!!

Awesome device and even better when you side load apps with the android debug bridge. I mainly use mine for Netflix, Hulu Plus and Sling TV.

You need to have one when you don`t have cable.

Have all the perks of Roku box. Plus can download more apps and watch anything on the net you could ever want. Only down side is the controller, get a bluetooth keyboard with mouse pad to unlock all control features.

I am very disappointed remote mice stopped working after one week,

1. New and original package.
by Applepomme
2. There are a ton of free channels. In fact, I am not aware of ANY channels which cost money to download. Most of them like Google Play Movies will just charge you to watch certain content. Go here to see an (almost) full list: https://www.android.com/tv/ Almost all of those news stations you mentioned have apps for Android TV. I think only CBS offers live 24/7 streaming, while the others offer tons of clips uploaded constantly.
by getcashmoney
3. Upon checking there are various apps that comes with this device. To know more about the Nexus Player, please see this link http://www.google.com/nexus/player/.
by Asus_Answers
3 Answers

1. The memory is 1 GB.
by CommunityAnswer
1 Answer