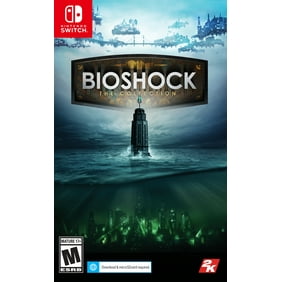 We aim to show you accurate product information. Manufacturers, suppliers and others provide what you see here, and we have not verified it.
Join Mario, Luigi, and pals for single-player or multiplayer fun anytime, anywhere! Take on two family-friendly, side-scrolling adventures with up to three friends* as you try to save the Mushroom Kingdom. Includes the New Super Mario Bros. U and harder, faster New Super Luigi U games—both of which include Nabbit and Toadette as playable characters!

Two games in one, for double the fun! Simple, straightforward controls, new playable characters optimized for younger and less-experienced players, and a wealth of bonus content—like a Hints gallery and helpful reference videos**—make this a perfect choice for anyone looking to introduce their family to the wonderful world of Mario. All a player needs is one Joy-Con controller, so two people can team up right out of the box! Tackle 164 platforming courses in the two main game modes and enjoy extra replayability with three additional game modes in which you can also play as a Mii character: Challenges, Boost Rush, and Coin Battle!

*Additional accessories may be required for multiplayer mode. Sold separately.

·  A variety of playable characters are available, some with unique attributes that affect gameplay and platforming physics.

·  Younger and less-experienced players will love playing as Toadette, who is brand new to both games, and Nabbit, who was formerly only playable in New Super Luigi U. Both characters offer extra assistance during play.

·  Multiplayer sessions are even more fun, frantic, and exciting thanks to entertaining character interactions. Need a boost? Try jumping off a teammate’s head or getting a teammate to throw you!

·  Features a wealth of help features, like a Hints gallery, reference videos**, and a Super Guide in New Super Mario Bros. U that can complete levels for you if they’re giving you trouble.

·  Three additional modes—Boost Rush, Challenges, and Coin Battle—mix up gameplay and add replayability, while also upping the difficulty for players who want to try something harder. Players can use their Mii characters in these modes!

·  Share the adventure with a friend! During two-player co-op gameplay, each player can use a single Joy-Con controller, so no additional accessories are required. And to add two more players to the mix, all you need is one extra set of Joy-Con controllers (sold separately).

great for game nights with the family

such a fun game. it's a bit hard getting used to at first for my 4 and 6 year olds but there's a couple types of games to play . Also love that it's an up to 4 player game. we all can play together

My 10 year old was so Happy with this! I got it for him as a surprise. His brother is 12 and does a lot to help me so I got him an iPhone 6 he deserved it! My youngest tho loves this game he gave me the biggest hug and said Thank you for the really fun game mom I love you!!!! Totally worth it!

My kids love this game! They play and have a great time. Its not too difficult or too easy just right. It was definitely worth buying!

I am a huge fan of the Mario serious. This one takes it to the next level! Its everything you love about Mario plus,you work as a team!

Great game for ANYONE

Excellent Port of the Wii U game

I love this game. Newer version to what I played when I was a kiddo.

I love this game! I may be horrible and die several times on a level, but its worth it! I love the chaos that occurs when you play multiplayer and everyone is bouncing off each other! I really like being able to play with someone rather than taking turns for levels. Great game and tons of fun for families!

The kids say it's an awesome game! I would recommend it to all.

Good for kids and family and all ages

I got it from Daily Deals, the game came, but it's not the box art that was listed in the store, meaning it's not the U.S version. Good thing the Switch is non region locked, but you can't make that mistake for other games on consoles.