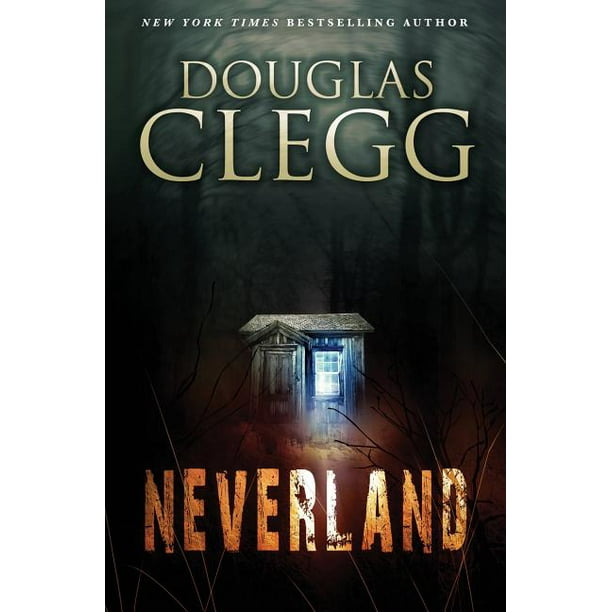 We aim to show you accurate product information. Manufacturers, suppliers and others provide what you see here, and we have not verified it.
Originally published: New York: Pocket Books, 1991.What calls to the children from within the dark shadows of the shack called Neverland? New York Times bestselling and award-winning author Douglas Clegg blends dark suspense and gothic horror in Neverland, a novel of deadly secrets and innocence corrupted. What lurks within the shack? What kinds of dangerous - and deadly - games do the children play there?

For years, the Jackson family vacationed at their matriarch's old Victorian house on Gull Island, a place of superstition and legend off the southern coast of the U.S. One particular summer, young Beau follows his cousin Sumter into a shack hidden among the brambles and windswept trees near bluffs overlooking the sea.

And within Neverland, the mysteries and terror grow...

For fans of Dean Koontz, Stephen King, and Bentley Little.

"Neverland is a masterpiece of dark suspense that will forever haunt your dreams." - Douglas Preston, New York Times Bestselling Author of Impact and (with Lincoln Child) of Relic and Gideon's Corpse.

"Douglas Clegg's Neverland is an unforgettable novel that combines creeping horror and psychological suspense. It starts like a bullet and never slows down." - David Morrell, New York Times Bestselling Author of Murder as a Fine Art.

"This is a powerful and thrilling tale, Douglas Clegg's best novel yet. The novel builds in whispers and ends in a scream. You will never forget Neverland." - F. Paul Wilson, New York Times Bestselling Author of Nightworld and the Repairman Jack series.

"From start to finish, Neverland is a haunting and tragic masterpiece. A powerful, thrilling tale, Douglas Clegg tells Beau and Sumner's incredible story with a subtle blend of humor and sadness that resonates with the reader long after the novel ends." - Marjorie M. Liu, New York Times Bestselling Author.

"A brilliant novel that grows richer with each reading, a multilayered marvel that will one day be recognized as one of the classics of supernatural literature." - Bentley Little, Bestselling Author of The Influence and The Haunted.

"Clegg's stories can chill the spine so effectively that the reader should keep paramedics on standby." - Dean Koontz, New York Times Bestselling Author of Odd Thomas and Innocence.

"Clegg knows exactly what scares us, and he knows just how to twist those fears into hair-raising chills. Neverland is Clegg at his best." - Tess Gerritsen, New York Times Bestselling Author of Girl Missing and the Rizzoli & Isles series of novels.

"Douglas Clegg . . . could have hung out with (in a better world) Robert R. McCammon, Bentley Little and Stephen King. These are guys who know America, and know how to literally scare up the best and worst aspects of the American character and slap them into a ripping yarn full of monsters, terror and enough action to keep the pages turning late into the night." - Rick Kleffel, book commentator for NPR

"Combing elements of H.P. Lovecraft, Stephen King, southern gothic, and adolescent angst, Douglas Clegg subsumes us in horror with Neverland, a tale so chilling it infected my dreams. Clegg builds horror in rich detailed layers. It is a testament to Clegg's gifts that we can't turn away; scary though the trip may be, the fright reaches out from the pages and pulls us along...Neverland is scary stuff, the product of a skilled writer of horror, and best read with the lights on." - San Francisco Book Reviews

"I can tell you without hesitation that Neverland is a true gothic masterpiece. I am incredibly impressed with it. This is a remarkable piece of literature."- Scott A. Johnson, Dread Central.com

"Neverland is a scary work written by an author soaring to the top of his game." - The Merry Genre Go Round Review.

"Neverland delivers . . . delicious slow horror...I'm going to put a library hold on one of Clegg's other novels, because if they're anything like this one, I'm an instant fan." - Sci-Fi Saturday Night.

What can I say about this book but awesome!? I've previously read Douglas Clegg's work and enjoyed it so when I saw this one I knew I'd have to check it out. I'm glad I did because it went above and beyond my expectations! How does a person say that a story was totally wicked and twisted but totally engrossing? Wickedly awesome? That's probably the best way for ME to describe Neverland. It's a contemporary gothic horror (IMO) that brings out the childhood fears and puts them in an adult perspective that will give you the Heebie Jeebies! Basically I thought it was just fantastic and I recommend it highly

Three pages into this ...

Three pages into this book, I knew that I was going to like it. The story starts with a family on their way to Gull Island, GA for summer vacation. They're in their station wagon....two 12 year old girls (twins) a 10 year old boy, a baby, and the parents. It is a typical road trip with the kids squabbling and carrying on and their parents trying to intervene and keep the peace. This story is narrated by 10 year old Beauregard (Beau). I love stories narrated by kids.....their descriptions of things are so hilarious and true. The way he describes the members of his family, including his Grandma Weenie who is crabby, wheelchair bound, and carries and silver-handled brush on her lap that is often used for spankings, is very detailed. I could picture her in my mind, as well as the other characters. I laughed out loud several times while reading this...especially when Beau is teasing his sister about her dead hamster! Beau's family vacations every year on Gull Island GA at his grandmother's house. His Aunt Cricket and Uncle Wayne join them, along with their son, Sumnter. Sumnter is strange, and Beau and his sisters are reluctant to join in any of his games. Sumnter chooses an old gardening shed which is strictly off-limits, to make into a clubhouse. There is a password to the clubhouse....and there is a god of the clubhouse. Before they know it, Beau and his sisters are sucked into Sumnter's weird world of games and hallucinations. He claims to have a god by the name of Lucy, in a crate in the clubhouse. Lucy must be fed....and by fed, he means sacrifices. The kids go along with Sumnter for awhile, but then things start to get out of hand. One evening they all experience "flying" up into the sky, and Sumnter begins to sacrifice small animals to Lucy's crate. From inside the crate there are sounds of scratching and growling. Sumnter swears the other kids to secrecy, but Beau confides in his mother about what's been going on.....but did he let her know too late? Lucy is expecting a very large and promising sacrifice; a human sacrifice; and she has asked Beau to get it for her so that she can come out to play. This Southern-Gothic type horror story is one of the best that I have ever read. It kind of reminds me of Boys Life by Robert McCammon, which is one of my favorites. Douglas Clegg does an excellent job weaving this twisted tale. I highly recommend horror lovers everywhere to check this out.

This was my first from...

This was my first from Clegg and it wasn't too bad. It won't go down as a classic but it was a solid work that kept me reading (which I guess is ultimately the point.) The concept was good and the story fast paced. What I think didn't work as well, is I never felt any kind of dread or horror, I was never drawn into the story like so many other novels will. The ending got a little weird for me and while the entire novel led logically to that point, it still just did not work for me. Clegg is a talented writer and I don't the problems that I had with this novel reflect necessarily on him as an author, but more on me as a reader not connecting with this particular story. I have other works of his on the shelf and will be picking them up soon enough. If you're already a fan, then this is worth the read, but a new reader may want to start elsewhere.

Written by a customer while visiting librarything.com
00
Average Rating:(1.0)out of 5 stars