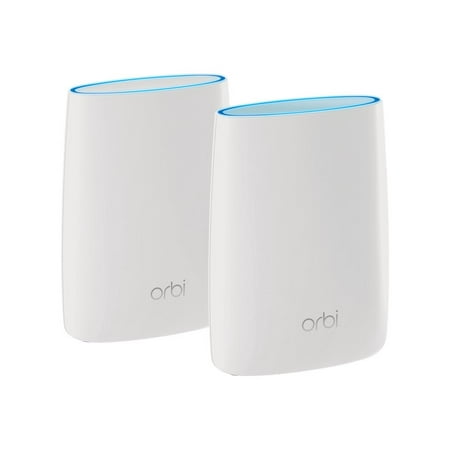 Finally, something that works

Up to this point, I've tried multiple range extenders. Have use Netgear extenders, Linksys extenders, with only limited success at best. I would have frequent signal drops, and I would have to do multiple device reboots to re-establish a signal.

The orbi is the first one that I've personally used that simply works. No more dropped signals, no more device reboots. Plus the coverage is exceptional.

The one thing I would caution about would be the location of the satellite. I had it in my first chosen location and I received a blue ring that indicated perfect connection. Yet, I still experienced a few minor issues. That's when I noticed on the orbi app on my phone that the satellite was showing an orange dot instead of a green dot. I Now understand that had something to do with what they call the back hall. I simply repositioned the satellite a little closer to the router, checked the app, found that the satellite now had a Green Dot, and everything's been good since.

Again, all I can say is, this is the first extender I've used that has delivered as promised.

Written by a customer while visiting samsclub.com
00
Average rating:5out of5stars, based onreviews

The units look very nice, they were very easy to set up, and the Orbi app for Android is a pleasure to use

Written by a customer while visiting samsclub.com
00
Average rating:5out of5stars, based onreviews

this was a big upgrade from my other wireless router. it is super fast and reliable. i would recomend this router if your in the market for one. my older (7 yrs) hp laptop is much faster than before.

Great Product - Worth it

Before this system, I had a router and extender. My wifi goes in and out several times a day. I thought the issue was with the ISP. Finally, I decided to switch from traditional Wifi to mesh technology. It was an eye opener to me, my internet speed reached peak point of our ISP's bandwidth and so does the internet stay alive.

Written by a customer while visiting netgear.com
30

1. Yes, internet service is required to access Wi-Fi at home.
by CommunityAnswer
00
1 Answer

1. Yes, this model requires an internet connection.
by CommunityAnswer
00
1 Answer