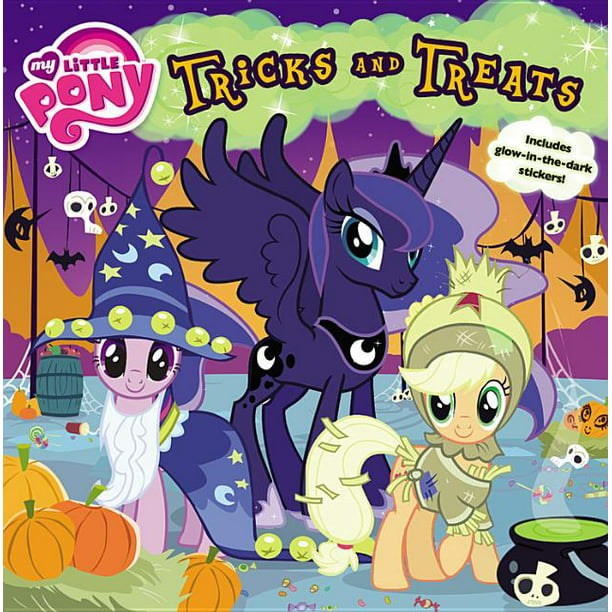 My Little Pony: Tricks and Treats We aim to show you accurate product information. Manufacturers, suppliers and others provide what you see here, and we have not verified it.
It's Nightmare Night in Ponyville! Join the ponies and their pals as they celebrate their version of Halloween. They dress up in silly costumes, collect lots of candy, and tell spooky stories about the evil Nightmare Moon!

The book is a basic adaptation of one of the episodes of the popular animated series, My Little Pony: Friendship is Magic. The illustrations are just screen shots from the show, and the story is a summary of the episode's plot. The ponies in Ponyville are celebrating Nightmare Night, a holiday very similar to Halloween. Traditionally, Nightmare Moon has been the boogie man of the holiday. What happens when Princess Luna, free from her corruption as Nightmare Moon, decides to visit on Nightmare Night? Misunderstandings and funniness ensue. I actually really like this episode of the series. Unfortunately, this is a book, not a television episode. The writing is basic exposition that conveys exactly what happened in the television show, balanced with a lot of dialogue, all pulled directly from the episode. If you're going to adapt something, adapt it, make changes, make it fit the new medium of storytelling. Of course, this is typical of spinner books based on popular television shows, so I knew what to expect. My daughters like it because it is about their pony friends, and because it had stickers at the back. I may be disappointed that the book publishers couldn't even provide new artwork and just relied on shots from the television show, but the art of the animated series is attractive, so it is still a pretty book, just unoriginal. It's easy to decide if this book is right for your family. My Little Pony fans will like it, regardless of its objective qualities as a book.

Reviewed by nmhalenmhale
Written by a librarything.com customer.
Helpful?