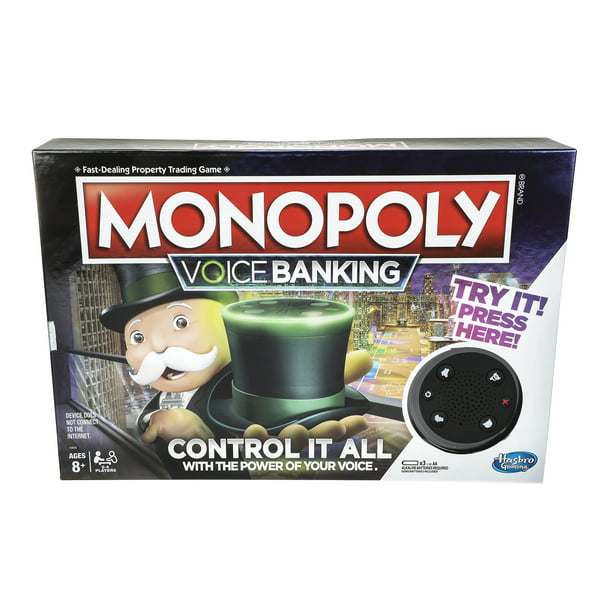 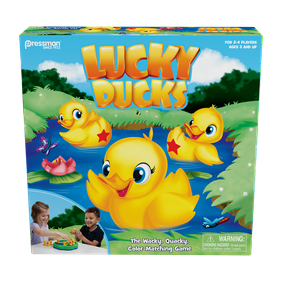 The Monopoly Voice Banking game features lights and sounds, and comes with an interactive Mr. Monopoly banking unit. The iconic Monopoly top hat is voice-activated and the personality of Mr. Monopoly really shines as he handles all of the transactions. He keeps tabs on players' money and Properties so there's no cash or cards to think about. Talk to Mr. Monopoly and he responds to certain commands. Press your token's button and say, "Buy." Wait for the ping, and then say the name of the property you want to buy. Mr. Monopoly will track the transaction, keeping the game moving. With the Monopoly Voice Banking game, players travel around the board aiming to be the person with the most money and highest property value to win!

The Hasbro, Hasbro Gaming, Parker Brothers, and Monopoly names and logos, the distinctive design of the gameboard, the four corner squares, the Mr. Monopoly name and character, as well as each of the distinctive elements of the board and playing pieces are trademarks of Hasbro for its property trading game and game equipment.

NOTE: Device does not connect to the Internet.

What others said when purchasing this item
Grandson Christmas gift
Myra, purchased on August 11, 2020
Looks fum
Frances, purchased on July 15, 2020

Great Game! My grandson loves Monopoly. This is a fun new spin on the old classic. Electronic Bank does all the work and it makes put away time much easier.

I received Monopoly Voice Banking for free as a part of a promotion from Hasbro, and wanted to leave a review. I see why they would replace the money with the electronic tracking as it makes things easier for the players and avoids cheaters. I wish the game was also more than 4 players but I understand why they made that move. It was fun and easy to play with the kids.

My mother is hearing and visually impaired Monopoly has always been one of her favourite games. And with the voice banking she was able to play again.

I was blown away with this game. It's actually an electronic banker. My kids and I just love it.

I love it it is more fun the new way

We enjoy playing this monopoly quick and fun

voice banking and other tips

voice banking monopoly is a twist to the original monopoly. 1. the board is smaller. each property is now only 2 blocks instead of the traditional 3, and the few exceptions of the 2. also, no railroad property, just take a free ride to wherever it says. 2. the swap properties is a cool twist as well 3. buying a hotel or house is faster and you can buy only 1 or the other per property so example, indiana gets a house but later you want a hotel on indiana, no can do. 4. the voice commands are not 100% perfect. though 90% it does what I ask. also, read how to do the voice commands, and practice with it. some you say the entire phrase when you press your button, and others you say "buy", then wait for it to chime, then say "indiana". there is a cheat sheet you get so you dont have to remember the phrases. 5. I think you need a little patience with the voice banking because I had issues the first time and was going to return it the next day. I have since given it a 2nd shot and I'm proud to say the error was me not reading the instructions for the voice correctly lol. the game can be played in under 1 hr 20 min if everyone understand the game and how it all works. otherwise first time may be a little longer.

Water damage to the Monoply board games

All three of the games were water damaged. The box it came was damaged. The games were intended as gifts... The intention here is to report that the package and its contents were damaged and look battered. I am stuck, the games work... but look awful. I would not want to put that damage on my shelf and would be embarrassed to pull this game out and share with friends and family. Attaching 2 images.