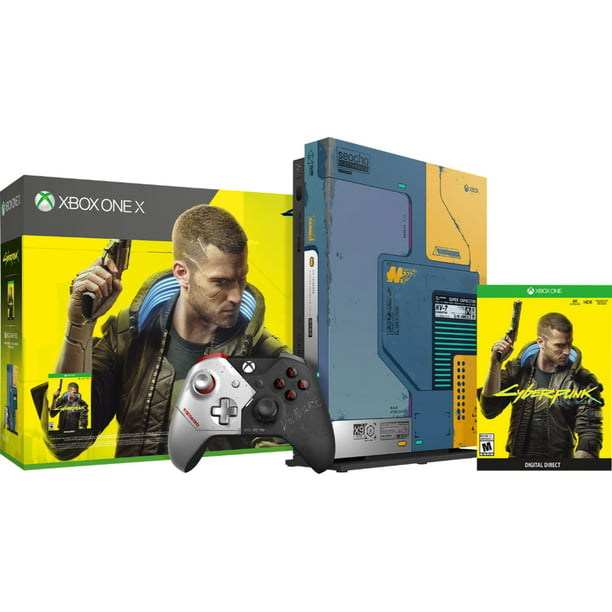 Step into future on Xbox One X
Enjoy the textures, glowing elements, bright panels, and color-shift effects to capture the vibrant grit and technical enhancements of Night City.

Cyberpunk 2077
Have fun with a full-game digital download of Cyberpunk 2077 (available November, 2020), as well as the future first expansion release.

Xbox One Cyberpunk 2077 limited edition wireless controller
Features a half natural and half cyber-enhancement design based on cult Cyberpunk character Johnny Silverhand and his bionic arm.

One-month Xbox Game Pass Ultimate trial
Whether you're playing with instant access to over 100 games on Xbox Game Pass with the included one-month trial, watching 4K movies, or streaming gameplay, there's never been a better time to game with Xbox One.

Built-in Wi-Fi
Stay connected from the same place you play. Network with friends on Facebook, post tweets on Twitter, stream live TV and high-definition movies, get your music from Last.fm, and log on to Xbox Live quickly.

Designed to play best games of past, present, and future
Play over 2,200 games, including more than 200 exclusives and over 600 classics from Xbox 360 and Original Xbox. (Games sold separately.)

One-month Xbox Game Pass Ultimate trial - Redeem by January 31, 2021. Game catalog varies over time. Upon redemption, the existing Xbox Live Gold and/or Game Pass for console or PC memberships will convert to Ultimate at a conversion ratio. Details and system requirements at xbox.com/gamepass.

Digital direct - Game and membership are delivered directly to your console during setup; no codes required. All included digital content will be attached to the first Microsoft Account that redeems it. xbox.com/digitaldirect.

Additional Internet speed, subscriptions and/or requirements apply for some features. You must accept Xbox terms of use and limited warranty. Some games not transferable and have no resale value; restrictions on game use apply.