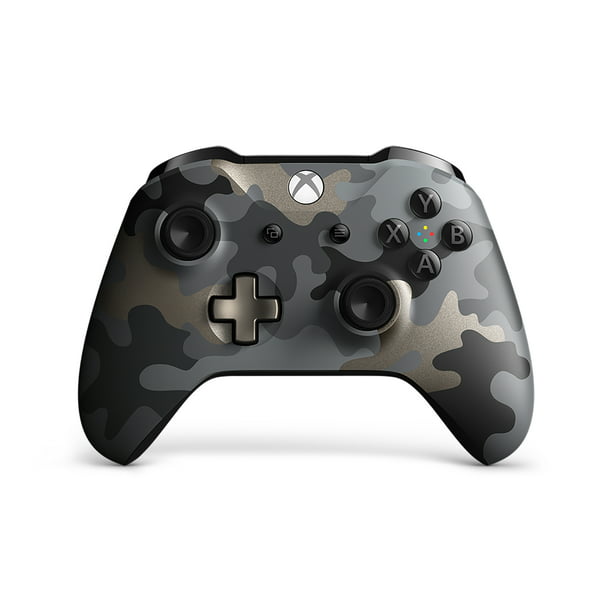 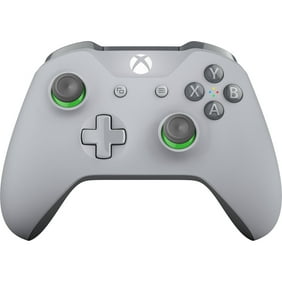 We aim to show you accurate product information. Manufacturers, suppliers and others provide what you see here, and we have not verified it.
Lock and load with the Xbox Wireless Controller ? Night Ops Camo Special Edition, the first in a new series of controllers, featuring a rugged black, grey, and metallic gold camouflage pattern. Trigger grip etchings give you extra control, and button mapping allows you to customize your gear just the way you like it. Plug in any compatible headset with the 3.5mm stereo headset jack, and with Bluetooth® technology, play your favorite games on Windows 10 PCs and tablets.

I literally got the last one available. It also comes with a 14 free trial of GamePass ultimate. This controller is sweet as can be. Super comfortable in hand, excellent grip, superb feedback, button mapping, trigger rumbles, premium feel and cool looking graphics. I swapped out the handle backs for quickshot trigger locks and good Lord is the a great setup! I got my controller within a week of of purchasing it, it came boxed well and the package and controller were in perfect condition (see pictures). I purchased this through Walmart so be careful to watch the vendor aka whos actually selling the product. I'm still waiting on a refund and a headset I purchased back in April that was bought on walmart.com through a geeks homehold which has been a terrible experience trying to resolve. Overall though I'm extremely satisfied with this purchase of the midnight forces 2 controller. I highly recommend it!

I purchased these remotes for my girls for christmas last year. They have out lasted the remote my husband purchased this past March from a game store online. (The joy stick got stuck)It cleans off nicely when they get sticky from kids playing with it. They have been dropped, shoved in couch cushions and still work perfectly. I especially like that it comes in different colors so everyone knows which one is their remote. I would definetly purchase this again

got it for windows 10

i don't have an xbox, but i'm using this with my gaming laptop for stuff like ace combat, assassin's creed and old school emulators. rumble feels great. works beautifully, you should get it. :)

Works as it should

Love this controller! Works as it should, I went ahead and purchased the 3 year warranty protection plan as well. Haven't had to use it yet

Just what's it's supposed to be... an xbox controller. Its served me well so far. By the way, it does not come with a charging stand, I bought that separate from Microsoft.

I only give this four stars not cause of the controller, controller is at a good price is made and manufactured very good, but I can not fit my old and as well my new headset that I just bought brand new off walmart.com to the controller which is really sad which means I might have to buy an adapter

Kind of disappointed with how often Walmart recycles returns back to others.. I got this controller and the right thumb joystick is slightly loose.. it also sometimes sticks and causes all sorts of problems for me. I didn't use the controller until a month after I ordered it because I was at a training op and I couldn't return it.. be careful when you order from here.. you never know what the quality will be like

Purchased this for my son the beginning of May. He is 13 and takes good care of his game and system and all accessories. Yesterday he went to get on and one of the toggles broke off from the base. This is the second one that has done it, exact same controller first time I thought it had been played with to rough but kind of thinking it's something with these controllers.

This product was terrible. I had bought it for my fiance because his other controller had just went out. First, it was placed on back-order. Then a few days later it started shipping. When it arrived at my door the outer box was all wrinkled up and broken, the only thing holding it together was the tape. When opened to the original, the seal had been tampered with. We opened it up to see the product and it was missing the rubber covers for the toggles, there were scuff marls all over the controller, and a piece was missing near the trigger button. Worst product I've purchased from Walmart yet, and such a disappointment as it was a gift.

Walmart stocking stickers all over box and cut

The box had a lot of unsightly Walmart stocking stickers all over it and a slice through the box like it was done by whomever had the box cutter at Walmart and was unloading the pallet of them. So very disappointed as this was supposed to be a special birthday gift...but it looks shady, like we got it from some backdoor deal.

If you would like to share feedback with us about pricing, delivery or other customer service issues, please contact customer service directly.
1-3 of 72 questions
by AlexSeptember 12, 2020

1. Yes, this product is compatible with original Xbox One.
by CommunityAnswer
Helpful?
2. Brand new
by Memo
Helpful?
3. Yes, it works on the Xbox One but not Xbox 360.
by JTodd
Helpful?
4. Yes
by Matt
Helpful?
5. Yes and yes
by Matt
Helpful?
6. Two standard alkaline AA batteries
by Matt
Helpful?
7. Yes
by Ddm33
Helpful?
8. yes
by Gameguy
Helpful?
9. This is a fake controller... be aware!!!
by MarlinDoris
Helpful?
9 Answers

1. Yes, this controller will work with any Xbox One console version.
by CommunityAnswer
Helpful?
2. Yes, this Xbox One wireless controller is compatible with all consoles in the Xbox One family of devices, including Xbox One S.
by MicrosoftOutreachTeam
Helpful?
2 Answers