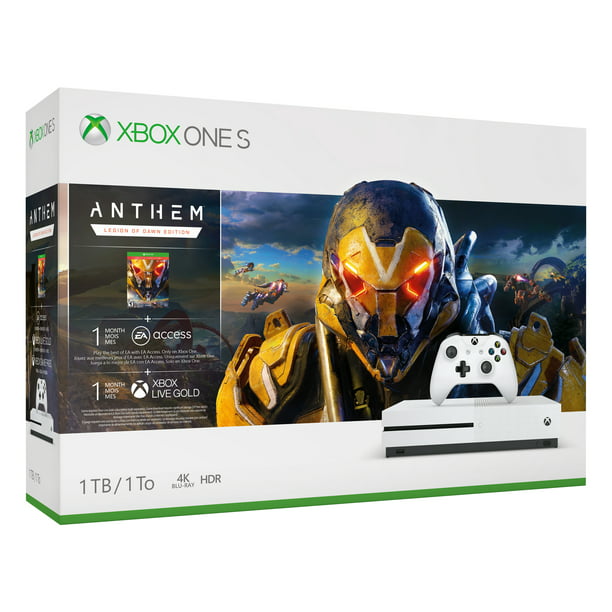 We aim to show you accurate product information. Manufacturers, suppliers and others provide what you see here, and we have not verified it.
Own the Xbox One S Anthem Bundle and fight the dangers of an ever-changing world with up to three teammates. Assemble your high-tech, hand-crafted, Javelin exosuit to explore vast ruins, battle deadly enemies, and claim otherworldly artifacts as a Freelancer. You are the only thing that stands between a shadowy threat and the ancient technology that could destroy humankind. Grow in power with every mission while you explore a beautifully deadly, everchanging world. This bundle includes a full-game download of Anthem? Legion of Dawn Edition, a 1-Month Xbox Live Gold subscription, a 1-Month Xbox Game Pass trial, and 1-Month of EA Access?. Whether you?re playing with instant access to over 100 games on Xbox Game Pass, watching 4K movies, or streaming live gameplay, there's never been a better time to game with Xbox One. (Game requires Xbox Live Gold subscription, sold separately.

The Anthem? Legion of Dawn edition includes four legendary armor packs, a legendary weapon, and more.  Join up to three other players to explore a beautiful and deadly world or assemble your own individual exosuit with unique technology and artifacts.

   Enjoy instant access to over 100 games out of the box with the included 1-Month trial of Xbox Game Pass.

   Join the greatest community of gamers on the fastest, most reliable gaming network with the included 1-Month Xbox Live Gold membership.

   Watch 4K Blu-ray? movies; stream 4K video on Netflix, Amazon, and YouTube, among others; and listen to music with Spotify.

My grandson loves the system

Thank you for making my grandson a "happy camper" by delivering his XBOX a week early.

This is an awesome deal, it actually comes with a month of gamepass and live gold, plus a subscription to EA so you can download more free games. 5 stars Microsoft.

Comment from MicrosoftOutreachTeam - 3/15/2019
Hey Drew, thank you for your feedback on your new Xbox One S bundle. We're glad that it was an awesome deal for you, and we hope you have a lot of fun with it. --Chuck, Xbox Customer Care
Average Rating:(5.0)out of 5 stars
Leslie, July 26, 2020
Verified purchaser
Average Rating:(5.0)out of 5 stars
January 21, 2020
Verified purchaser

Written by a customer while visiting samsclub.com

1. Xbox One supports both WiFi and wired Ethernet connections. A live Internet connection is required to set up Xbox One and for online features such as online multiplayer, video streaming, and game and system updates.
by MicrosoftOutreachTeam
1 Answer