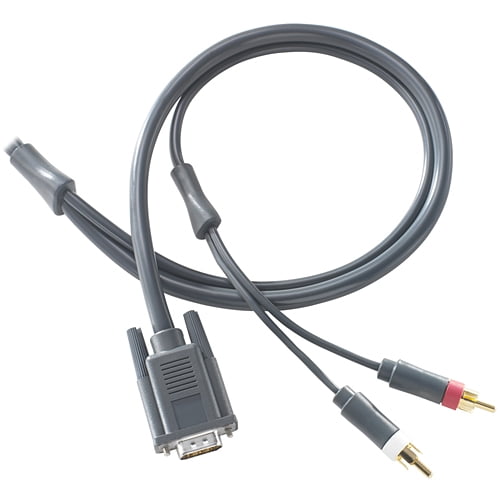 Or get it by Thu, Oct 22 with faster delivery

We aim to show you accurate product information. Manufacturers, suppliers and others provide what you see here, and we have not verified it.
Take your gameplay to the next level with Microsoft VGA HD AV Cable, Xbox 360. It allows gamers to enjoy their games in high-definition on a flat-panel TV. This Microsoft AV cable can also be used with VGA monitors to play games on a computer. It works with Dolby Digital 5.1 surround sound for the audio and video gaming experience. Microsoft Xbox 360 AV cable features an 8' long shielded wire for durability and flexibility during installation. Users will get a high-quality transfer of both audio and video signals with this cable. It supports a variety of video output settings including 480p, 720p and 1080i.
Microsoft VGA HD AV Cable, Xbox 360:

I am using this on my LCD monitor now to play my Xbox 360. Everything looks clearer compared to the regular TV. If you want to plug to a regular monitor, get this. I have no problems with it and even got the adapters to plug the monitor and the sound. Great buy and nice thinking from Microsoft.

i've looked all over for a vga cable and found the one at wal-mart.i love it. i have a dell 19in.hd widescreen monitor and let me say if you wan't too enjoy your gaming this is the way to go.

this cable works great with my monitor. i bought it so i could use my HD monitor(which most are) to play my xbox on. especially since my resolution on my tv is pretty bad and since the screen is much smaller. the price however(40$) is a little expensive. you can buy an offbrand for cheaper and you can buy a microsoft brand from alot of other online retailers for about 30$. i wish i would have done that.

A little overpriced but works great!

This works great with my new 22" widescreen monitor. My monitors default resolution is 1680x1050 (16:10) but the Xbox 360 doesn't output at that so I use the next best looking res which was 1280x768. Looks fantastic! The only thing negative about this official cable is that it is a little expensive, but it works great and was worth it. Note: I believe that this official VGA HD cable looks better than other 3rd party cables, so buy this if you are trying to decide.

I've seen so many reviews speak of ghosting and the like, but I haven't had any issues with mine. Just make sure you have the right resolution for your monitor or tv and you're gold. Also check the different reference levels. I chose extended because it looks best on my monitor. I first tried for the highest resolution, but only parts of the screen fit on my monitor because my monitors native resolution is 1440 x 900. I set it to that and it looks amazing. Add in a coupler I bought and I connected the audio to my pc speakers and I'm ready to game.

I have an aoc 18.5/19" monitor i bought from walmart and it works very nicely with the monitor. The best part is the adapter that comes with it. If it werent for that i wouldnt have sound from my new xbox that i bought also from walmart . com. Fast great shipping and arrived just in time for xmas. Im very satisfied with this product. A 10 out of 10. Keep on going Microsoft good job.

The VGA cable works perfect with my hdtv. I have been using this product for about 5 months now and i havent had any problems whatsoever. I bought this so i wouldnt have to unhook my digital cable box everytime i want to play my 360 because it uses component cables. Only problem was trying to hook it up to my tv because the vga plug is in an awkward spot on my tv, but i would have to blame the tv company on that one. great product!

It is the Real thing

Much to my surprise it is the authentic Microsoft Xbox 360 VGA cable. Was also very happy to see it also comes with a VGA gender changer, and a RCA to standard headphone jack. Sadly that adapter is a little bulky and would not work with my monitor but still a great buy.

Great product,works really good and had no problems with it.

Do you want your 360 hooked up to your nice LCD monitor? Then yes, this'll work. -- No problems to have. Picture looks great. Surprisingly came with an extra adapter for the audio so if you're stuck with a headphone jack, don't let the red and white plugs scare you away. Also, it comes with a VGA gender changer, unlike some of the third party cables. -- Complaints to be had: I wish the audio separated at the beginning of the cord, rather than just the last two feet. There are very minor ghosting issues with the text. Price could be lower, around $29 if not less. Perhaps there should have been a few bullet points about the adapters on the packaging, speaking of which, the packaging is downright infuriating to open. -- Otherwise, I'm entirely pleased. Does exactly I wanted it to do. And the picture quality is above sufficient. (I do wish there was a DVI version that split the audio from the main cord, sort of like this does.)

If you would like to share feedback with us about pricing, delivery or other customer service issues, please contact customer service directly.
1-3 of 8 questions
by boogerbutDecember 29, 2010

1. Only your monitor will be hooked up, not your actual PC. If you wanted to watch/record/capture your Xbox, you need a caption card that installs in your PC, or a video converter box to hook your Xbox 360 video source to.
by Sanges99
Helpful?
2. If your monitor has a VGA port, then yes.
by Brut3Str3ngth
Helpful?
2 Answers

1. you would need a cable that converts RCA to a headphone jack, these converters are available at most electronic stores, and probably on walmart.com
by Swizzler
Helpful?
2. It comes with an adapter that will make the two cords into one standard headphone style jack. If you would like to use your computer speakers, you can buy a 1/8 male to female coupler and use them that way, that's what I do.
by Brut3Str3ngth
Helpful?
2 Answers

1. As long as your "standard" tv has a VGA connector yes.
by SkullPanda
Helpful?
2. No, this is for a TV with an VGA port, usually an HD TV or an computer monitor. Some standard Televisions may have a VGA port, check before making your purchase.
by Brut3Str3ngth
Helpful?
2 Answers