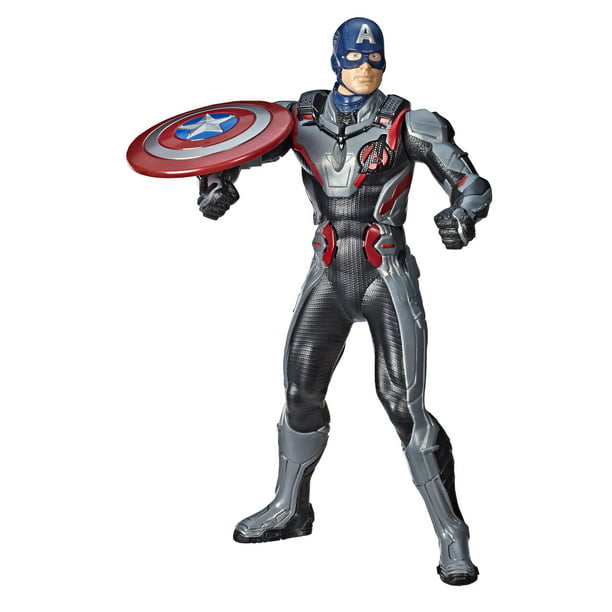 This toy is not suitable for ages under 3 years. It contains one or more of the following items marbles; small ball; or small parts.
We aim to show you accurate product information. Manufacturers, suppliers and others provide what you see here, and we have not verified it.

This 13-inch-scale Shield Blast Captain America action figure features 20+ sound effects and phrases from the Avengers: Endgame movie, part of the Marvel Cinematic Universe. Fans and kids can activate the shield blast feature and imagine the star-spangled Super Hero battling for the future of the galaxy alongside the other Avengers.

Copyright 2018 MARVEL. Hasbro and all related terms are trademarks of Hasbro. Includes: figure, accessory, and instructions.  Figure scale: 13 inches. CAUTION: Do not aim at eyes or face. TO AVOID INJURY: Use only projectile designed for this product. Do not modify projectile or projectile launcher. x1 1.5V AA ALKALINE BATTERY REQUIRED. DEMO BATTERY INCLUDED. SEE INSTRUCTIONS.

My 4 year old boy is very happy with this figure. Well built, no smell of anykind, throws shield, also talks when you press the button and while throwing shield! FYI, got this at 50% off price. Sweet!