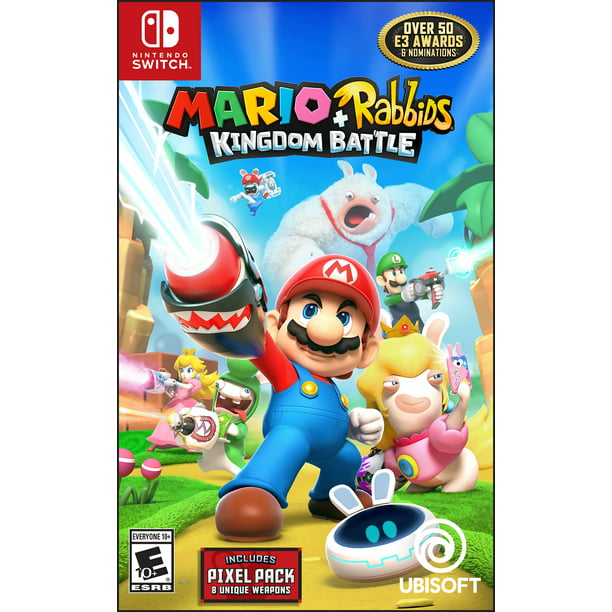 The Mushroom Kingdom has been torn apart by a mysterious vortex, transporting the chaotic Rabbids into this once-peaceful land. To restore order, Mario, Luigi, Princess Peach, and Yoshi must team up with a whole new crew: four Rabbids heroes! Together, they will battle with weapons through four worlds filled with combat, puzzles, and unpredictable enemies.

Developed exclusively for the Nintendo Switch™ system, Mario + Rabbids Kingdom Battle is the best of the Mario and Rabbids franchises, combining all that you love about Mario’s iconic universe with the side-splitting antics of the Rabbids.

I cannot believe there are full grown adults on here complaining that a kids game isn’t good for adults. Sad. Anyway, this is an excellent game. There are four beautifully designed worlds filled with platformer style puzzles which are reminiscent of Super Mario 3D world. Interspersed throughout each world are the turn based strategy encounters (think xcom). The battles are strategically challenging, but there is an easy mode which can be toggled for individual battles if you are more interested in the story. The writing is filled with Paper Mario style humor. The music is energetic and engaging. The story is simplistic and is more rabbids focused although Mario is the main character and rabbids make up the majority of the enemies. Overall the game is filled with hours of delightful gameplay and perhaps a fair bit of replay-ability. I picked up the splatoon 2 switch bundle along with this game and we haven’t even played splatoon yet since we’re having so much fun with Mario and his zany rabbid friends.

Seriously, ignore the other people trashing this game. I got this game with my Switch and immediately got sucked into it. The gameplay is turn-based, but still engaging with how the characters interact with each other. If you're a fan of xcom or the fire emblem series, this is a fun game to pick up. The story is also pretty straightforward with the rabbids being the main focus, though there are still a lot of mario elements to it. I just unlocked the multiplayer but I hear that's also fun so i cant wait to try that. Overall, if you're a fan of Mario and want to try out something new you should definitely pick this game up at some point. Hands down one of the best games available for the Switch at the moment!

Anyone who's a fan of the modern XCOM games will likely enjoy this as an XCOM-lite with its own twists, as long as they don't mind the visual direction. Much more challenging than the innocent cover implies, it's a fun turn-based tactical strategy game, with a good amount of depth and thought put into the gameplay. Story is basic and nothing special. Characters have quite a bit of personality. Soundtrack is well made and fits the setting. Probably my biggest surprise hit of 2017. If you had told me I would want to buy a Mario X Rabbids game a year ago, I would have said that was crazy talk. Definitely not a game for young kids, regardless of visual direction, as one review suggested it was. It would be too challenging for most to complete the full game. Difficulty in later levels is more aimed at teens and adults. DLC is even harder. May be fine for really experienced younger gamers who enjoy strategy games.

One of the best games for the switch

Super fun game! My husband and I both love it.

Written by a customer while visiting jet.com
00
Average rating:5out of5stars

NOT FOR PEOPLE WHO DONT LIKE TO THINK. VERY DEEP AND FUNNY GAME. NOT FOR LITTLE KIDS, AGE 16 & UP

Not for older kids or adults

Ok game play is for very young kids ...teens not a game for ... Ubisoft has always felled..they take a good idea and couldn't find that right combination of play..my daughter tried ..I even tried ..just really couldn't get into it ..very slow pace ..if u like low combat slower rpg ..then this might be right for u ..was expecting a little more ....we play alot of family type one on one play ..this game lacked alot in that

Story line too slow and basic definitely not for adults not a good collaboration. Buy Legos or Mario Cart instead much more fun and better game

1. Rollback refers to the price being lowered.
by CommunityAnswer
00
1 Answer