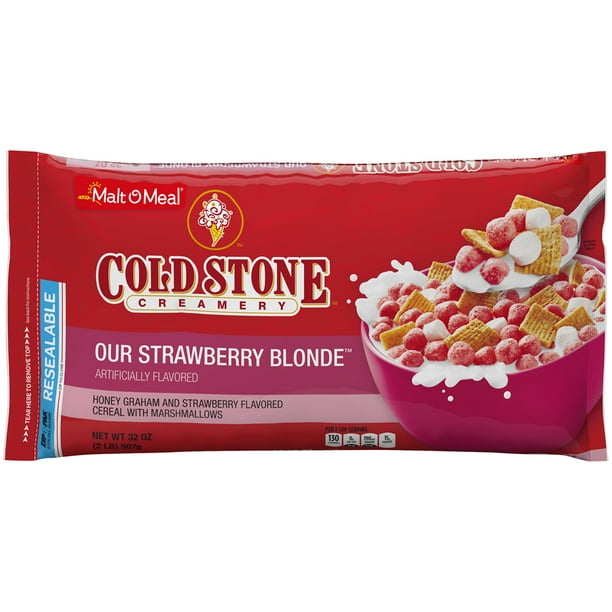 We aim to show you accurate product information. Manufacturers, suppliers and others provide what you see here, and we have not verified it.
Cold Stone Strawberry Blonde cereal puts ice cream flavors in your breakfast bowl. Strawberry Ice Cream flavored Puffs, toasted Honey Graham Squares and tasty Marshmallow Bits. It's not ice cream and it's not strawberry pie, but a ready-to-eat breakfast treat.Here's the inside scoop on this cereal with melt-in-your-mouth goodness. We've taken some of the most popular Cold Stone Creamery Signature Creations and turned them into super delicious breakfast cereals. Now you can have the fun flavors of ice cream any time of day for an quick breakfast or easy snack. Looking for the ultimate breakfast experience? We use the best ingredients and create unique flavors, all at a family-friendly price. Malt-O-Meal cereals have quality and value are always in the bag.Malt-O-Meal, Cold Stone Strawberry Blonde Cereal, 32 Oz Bag

What others said when purchasing this item
Good value. Good cereal.
Gm, purchased on September 3, 2020
I've never seen it before!
Shari Lynn, purchased on August 27, 2020

my kids love this! I was looking for a cheaper cereal option that I can get delivered and bought these on a whim, but my kids absolutely love them! will definitely buy again.

Delicious! Was skeptical when I purchased it. My kids love it too! Big bag and good price! Was a little dusty on the outside when arrived but I purchased it with several other items. It does taste artificial but it is a sweet cereal!

love this but why is it 14 dollars?

Great new taste, much different then other brands.

Love this cereal. My granddaughter and I both love it.