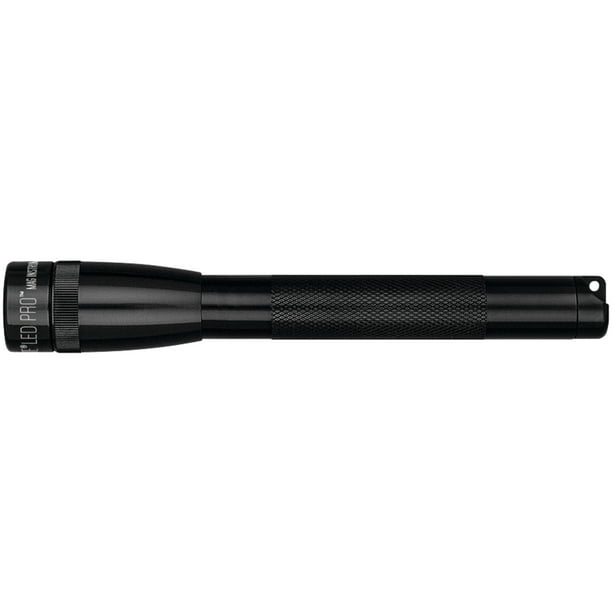 Or get it by Mon, Oct 26 with faster delivery

We aim to show you accurate product information. Manufacturers, suppliers and others provide what you see here, and we have not verified it.
See clearly at home or on-the-go with this Mini Maglite Pro LED Flashlight. The housing is made of a non-corrosive, high-strength aluminum alloy for extended use. It features the latest-generation LED that yields a high level of performance, giving you access to a whole new level of brightness. This flashlight is drop-resistant and contains an O-ring seal that prevents water from entering. It also has a sleek, lightweight and compact design that makes it easy to handle, transport and store. This super bright LED flashlight comes with a belt holster that you can use when you are away from home for convenient, hands-free carrying. It's ideal for keeping in your car, purse or backpack so you'll have access to a sufficient light source whenever you need it. The Mini Maglite Pro LED Flashlight is available in a variety of fun colors.

What others said when purchasing this item
These are great little flashlights!
Todd, purchased on October 18, 2020
I work as an electronic technician around, and in large robotic machines. I need to see in these machines as part of troubleshooting problems. My flashlight must be bright. I chose the bright red color so it will can be easily spotted should I put it down. A black or silver one would just disappear and I'd be buying another one.
Thomas, purchased on September 15, 2020

Whoa! It is BRIGHT

Far exceeds my anticipation. I can't believe how bright that little LED is. You can't look at it directly. It seems to be similar to the strength of a laser. Albeit, not as extreme, but real bright. In the "candle" mode, when place high on a dresser, it lights up the entire room to the point where you would think it is early morning or late evening. The LED casts off the white ceiling and puts light even on the floor. I'm stunned. The battery only lasts for 2.5 hours, but for the power this Mini Mag Pro puts out, that is no big deal. It's no problem to keep a few extra batteries around. Super product. My first Mini Mag lasted for years. Dopey me, I kept the batteries in to the point that they swelled up and leaked - destroying the Mag. I'll be sure to change the batteries every spring along with the smoke detector batteries and Daylight Savings Time clock change.

Walmart did a very good job of shipping the item to me quickly. I've had great luck with Walmart on-line, so far. The item arrived very quickly and was as advertised. This is a very bright and handy little flashlight. It's great for the glovebox of the car.

Bright, clear light when you need it

My husband lost his last mini maglite pro, and after hearing numerous times how much it helped him on the job to see clearly into dark spaces, got him a replacement for fathers day. He uses an old leather belt clip to hold it in place from a mini maglite made many years gone by - just wish maglite would come up with a more secure yet easy to remove holder for the light.

Great Maglite quality you expect, 21st Century light system. I have used Maglite's for 30+ years. I have multiple 3-4 D cell Mag's for vehicles, home, shop, work. Have multiple Mini Mag's in tool boxes, etc. They are great lights, but they are nothing in brightness to the newest generation! This is the newest brother to the traditional Mini Mag 2AA, but with LED bulb! It is identical to the Mini Mag 2AA, but maybe a 1/2 inch longer, same features/functions. Came with 2 Duracell's and the open top belt sheath. Although my order said a 226 lumen light, I got a 272 lumen light, so I think the picture is of a older flashlight. Incredible beam brightness and distance. If you use a Mini Mag, this is a must update/upgrade. If you want a great, high quality, powerful, small, dependable light, that is well made with high quality parts, you won't be disappointed!

Small enough to carry on your belt with the holster provided and very bright. I have used the convential mag lite for years but this new LED is much better, love it.

You can't beat a Maglite!

I first ordered one of these in Black, which was rated at 226 Lumens. I was quite happy with it. Then I ordered a second one in Blue. Well this one came rated at 272 Lumens! It must be a newer, upgraded version. You can tell the difference when you turn them both on and aim them at a wall. The difference isn't tremendous, but there is definitely a difference. The 272 Lumen version has a whiter, brighter light. Now I am kind of disappointed that my Black one is only 226 Lumens. But, to look on the bright side, I am grateful that the Blue one is 272 Lumens. It's funny, both packages are marked exactly the same as far as Model name and they both say NEW-Ultra Bright. The only difference in the packaging is that one says 226 Lumens and the other says 272 Lumens, and this part of the labeling is a separate insert placed in the package. If I knew I'd get another 272 Lumen light, I'd order another one in Black, but there is no way of knowing which one you will get. I guess you'd have to buy one at the store to make sure you got the new version.

great light hate how it twist to turn on

Things you should know

Nice to see Maglite upgrade to a powerful LED.

Pros: I've owned a few of the old heavy-duty Maglites and welcome their upgrade to the LED age. This little light is very powerful and maintains the ability to twist the head for differing pattern preferences. Quality on-off switch. Water resistant. The strong aluminum barrel is still there too. Cons: they can eat batteries up quickly, at full brightness settings. A bit overpriced, in my opinion.

I purchased this light because it stood out from all other brands sold on the same shelf. I recognized the brand as a quality brand that I have owned and enjoyed in the past. For the price, it is the best deal on the shelf. It is by far the brightest and has the longest battery life compared to the other flashlights. Out of the package, it feels and operates like a normal Maglight. The beam of light is extremely bright and can be focused from a flood light to a spotlight. This light can easily spotlight something in the dark at 80+ yards away. My only issue I had with it was when I used to change a tire and I placed the flashlight on the concrete surface and it started to roll and flicker. Thats when I noticed any movement to the very top of lens would cause it to flicker. i thought this was a defect so I exchanged it for another. The next one did the same thing, so I just returned it and bought a different brand. I still have old Maglights that work great so I know they can make quality flashlights, i guess this particular model has a design flaw that was overlooked.

1. No. The XL-50, XL-100 & XL-200 have a tactical tail-cap switch. Here's the specs on the mini-mag pro: http://www.maglite.com/Mini_Maglite_ProPlus_LED.asp
by SearchingForTheGoodStuff
Helpful?
2. NO,YOU TWIST THE BEZEL,BUT IT WORKS EXTREMELY WELL.
by An anonymous customer
Helpful?
3. No. Twist the head to turn it on and reverse twist it to turn it off. Initial on is focused and further twisting broadens the field. If you continue twisting (unscrewing the head all the way), you can remove the head and have the fully exposed LED in the "candle" mode.
by BorisFromBarnegat
Helpful?
4. This model does not. You twist the head.
by ArcherinCO
Helpful?
5. The only ones that have an actual button to turn them on and off are the tactical versions, which the button is on the end cap, or the larger battery types, like the ones that use D sized batteries (I think C size may too, but not sure) have the typical button on the side of the handle. There is an aftermarket company that sells a new tail cap that has a button on it, that you can use to turn the flashlight on and off with, but just be warned, all the reviews I have seen from them have pretty much all said that it is not sealed good. Unlike the regular maglites that are sealed pretty good, where you can even drop them in a bucket of water by accident, and not have to worry about much water getting inside, the aftermarket ones you can pretty much guarantee that there will be a bit of water inside if you drop it in water, even for a couple seconds. they are sealed that badly. So if you want to give the aftermarket ones a try, just know that you are taking a chance of water and dirt getting inside the flashlight.
by kaniki
Helpful?
6. No. You turn the head of the flashlight to turn it on and off. You can also remove the head completely and stand the flashlight up inside the head to use as a very bright candle.
by RalphC
Helpful?
7. The one I bought is 272 lumens
by Cathy
Helpful?
8. It&#39;s not a spot more of a flood light.
by Tra143
Helpful?
8 Answers

1. This product does not have a clip.
by CommunityAnswer
Helpful?
2. comes with a holster.
by BikerDude
Helpful?
3. No, it does not.
by RalphC
Helpful?
3 Answers

1. This unit is 226 lumens.
by CommunityAnswer
Helpful?
2. I ordered a Black one and a Blue one. The Black one I got is the 226 Lumen version, but the Blue one is the new 272 Lumen version. The pictures for both of them said 226 Lumens, but the batch of Blue ones they received must have been the upgraded version. I wish my Black one was the 272 Lumen version. You can definitely tell the difference when you turn them both on and aim them at a wall. The 272 Lumen version has a whiter, brighter light. The only way to be sure of which one you get is to buy it at a store. That is one of the downfalls of shopping on the internet.
by RalphC
Helpful?
2 Answers