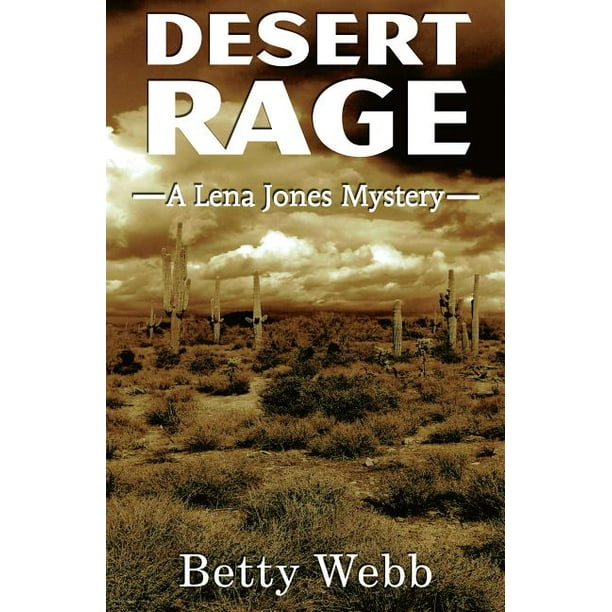 The horrific slaughter of a prominent doctor, his wife, and their ten-year-old son brings Thorsson to Private Investigator Lena Jones. The slain family's 14-year-old, Alison, has confessed to the murders. Thorsson wants to hire Lena to discover if Alison is telling the truth, but Lena demands to know what a rising political star wants with a girl she's never met. Desperate for Lena's help, Thorsson reveals her secret - that Alison is the candidate's biological daughter. But that's not all. Thorsson then confides something more than a mere hidden pregnancy, something that could ruin her political plans forever.

Suspecting that Alison's parents had secrets of their own that could have led to the murders, Lena finally accepts Thorsson's assignment. But interviewing those who knew the family well soon puts Lena - now a strong defender of the two teens - in danger of her life.

Fast-paced, probing, and filled with the trademark twists of the Lena Jones series, Desert Rage once again shows that Betty Webb is unsparing of her characters yet writes their stories with wit and compassion.

Desert Rage is one of a series about Lena Jones, P .I. and her detective agency located in Scottsdale, AZ. A family is brutally murdered and the daughter and her boyfriend are arrested for the murders. But as Lena investigates, she finds other people may have reasons to want revenge on the murdered father. A well-crafted mystery with memorable characters.

Private investigator Lena Jones's new client is Arizona Congresswoman Juliana Thorsson, a woman on the fast-track to even higher office. In their initial conversation, she reveals that she wants to hire Lena to work with the attorney she has hired to defend 14-year-Ali Cameron, who has confessed to masterminding the brutal torture-murder of her parents and younger brother. Ali's boyfriend Kyle Gibbs has confessed to committing the murders. Although Lena was ready to decline the Congresswoman's offer ... mainly because she abhors Thorsson's politics ... she's a sucker for a kid in trouble. After all, Lena was once a kid in trouble, and in foster care like Kyle, and she still bears the scars. Most of the people Lena interviews express skepticism that Ali could have planned the murder of her own family. And Kyle's foster mother, who's in the process of adopting him, believes Kyle is much too soft-hearted to commit such brutal murders. Lena discovers a piece of evidence that police missed in their search of the Cameron home -- evidence linked to Ali's father, an emergency room physician. Lena's business partner Jimmy Sisiwan, a computer guru, figures out how that evidence ties into what happened at the Cameron home, and a long list of suspects emerges. I hadn't read a Lena Jones mystery for some time - they're a bit darker than the usually cozies I prefer. But I found myself drawn into the mystery, and found Desert Rage to be a real page-turner.

If you want to read a mystery that gives you a real feel for the Scottsdale and Phoenix metropolitan areas, you can't do better than Betty Webb. But the setting is merely the icing on a cake that is expertly crafted with equal parts character and plot. Lena Jones is my favorite private investigator, and her partner in Desert Investigations, Pima Indian Jimmy Sisiwan, is more than a mere sidekick. Jimmy keeps the business running-- and tries to keep Lena out of trouble-- while she goes off on her dangerous investigations. Lena is strong, smart, and smart-mouthed-- probably because of her childhood in which she was shot in the head, abandoned by her parents, and raised in a series of foster homes by sometimes abusive adults. This tends to put a different spin on life for the survivors, and Lena has always zealously guarded her privacy while fighting for the underdog. Desert Rage finds Lena searching for more than the identity of the the killer of young Ali's parents. As she tracks down leads and interviews people, she finds herself looking for an answer to the question "What is a mother?" She has plenty of women to compare. Her own mother, her favorite foster mother, Ali's murdered mother as well as her biological one, Kyle's foster mother... the list is a long one, and each woman's behavior gives Lena plenty of food for thought. Although Lena is always the star of the series, in this book Webb gives us alternating points of view: Lena's, Ali's, and Kyle's. It's done sparingly, and it's done well because it gives us true insight into all three characters. Best of all was being able to watch Ali's transformation from a self-centered little girl who appeared to be completely capable of murder to a young woman much more aware of the world around her-- and watching Lena's views of motherhood subtly begin to shift even as she's looking for a killer and in the middle of an arson investigation. Desert Rage is a hard book to put down. It's not necessary to read the books in this series in order, but don't be surprised if you find yourself reading one and then going back to find and read all the rest. This book-- and the entire series-- is Quality.

I received a copy of Desert Rage by Betty Webb and did not realize it was part of a series, however I found this to be a delightful murder mystery and will check into her previous books in the series.