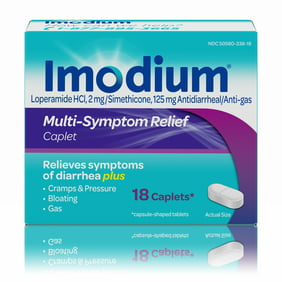 We aim to show you accurate product information. Manufacturers, suppliers and others provide what you see here, and we have not verified it.
Lactaid Fast Act Caplets work quickly to make dairy foods easy to digest for those with lactose intolerance or dairy sensitivity, so you can enjoy everything on your plate. This digestive supplement helps prevent the gas, bloating, and diarrhea that many people experience after eating foods containing dairy. The natural lactase enzymes in this dietary supplement contain 9000 FCC lactase units to help prevent symptoms associated with lactose intolerance by breaking down milk sugar (lactose), so dairy foods are easier to digest. These easy-to-swallow caplets start working with your first bite or sip of dairy food. Certified kosher and suitable for ages 4 and up, Lactaid Fast Act Caplets are available in convenient travel packs making them ideal for on-the-go dairy relief.

Instructions: Take at First Bite Take 1 caplet with your first bite of dairy food. If necessary, you may take 2 caplets at one time. Enjoy Dairy! Repeat If you continue to eat foods containing dairy after 30-45 minutes, take another caplet. HOW IT WORKS: LACTAID Fast Act Supplements contain a lactase enzyme that your body may not naturally produce enough of. It works in harmony with your body to help you digest dairy. QUESTIONS OR COMMENTS? For questions or comments in English or Spanish, call toll-free 800-522-8243; Outside US, dial collect 215-273-8755 or visit www.lactaid.com

(-) Information is currently not available for this nutrient.

* Percent Daily Values are based on a 2,000 calorie diet. Your daily values may be higher or lower depending on your calorie needs:**

** Percent Daily Values listed below are intended for adults and children over 4 years of age. Foods represented or purported to be for use by infants, children less than 4 years of age, pregnant women, or lactating women shall use the RDI's that are specified for the intended group provided by the FDA.

I stick to the Lactaid Fast Act even if it cost more then the other product! It's dependable for what it's suppose to do. They are out of the 60 tablets pack, so I just had to ordered multiple packs of this 12 tablets ones. cost me bit more :(

I have always been lactose intolerant but have always been able to tolerate diary products with minimal symptoms. As I have grown older (I am 54 now), my lactose intolerance has gotten worse: painful cramps, bloating, gassiness, diarrhea/constipation. I started taking Lactaid Fast Act Caplets about a month ago and ALL my symptoms have gone away. What a life saver for me! Now, I carry the caplets with me in my purse and lunch bag at work. Plus I love that the dose is ONE caplet per meal instead of 3 tablets!

I can not believe this helps!!!

I will be one to admit I did not believe this would do anything to help my issues. Although my mom and sister encouraged me to try this product I was still hesitant because of my history with dairy. It has been several years since I've had milk and ice cream while minimizing my intake with other dairy products (cheese...etc) because I was literally afraid of the consequences I would face later. I am happy I tried this product, I was so scared leading to my big day ( I know it sounds crazy to you but this was an event in my home) my husband was nervous because hes my masseur when things get UGLY. if you suffer like myself I would truly advise you to give this product a try, what more can you lose? Look at me I lost several years of good strawberry, chocolate and vanilla don't let this be you!

OMG, I love these pills

Every time I drank coffee with milk in it or ate ice cream I would have serious gas and bloating - super uncomfortable. I was on vacation and decided to buy these and to my surprise they work great. No more discomfort and I can now enjoy Starbucks and Coldstone IceCream. I did notice that the fast act caplets that are individually wrapped work better for me than the original caplets in the bottle. The fast act caplets I only need 1 and the original I need 3, so I prefer the fast act individually wrapped in the box, not the bottle.

I was out to eat with a cute guy at a diner. He suggested we share a milkshake, which seemed romantic - except, for me, milkshakes were stomach assassins. I didn't know why, so I had simply avoided them. Now, though, I was confronted with my digestive nemesis.

"I can't drink them," I confessed. "They make me feel awful."

"Maybe you're lactose intolerant," he said. He slid a small white packet across the table. "Try this."

I glanced at the Lactaid label and looked at him to make sure he took a tablet first. After seeing it was safe, I opened the packet and placed the tablet in my mouth. Half an hour later, the milkshake was gone, and my stomach had no complaints. I bought a box and have had a pleasant journey through countless dairy escapades since.

As for the guy? We've been married 10 years now.

Written by a customer while visiting Lactaid.com
3811