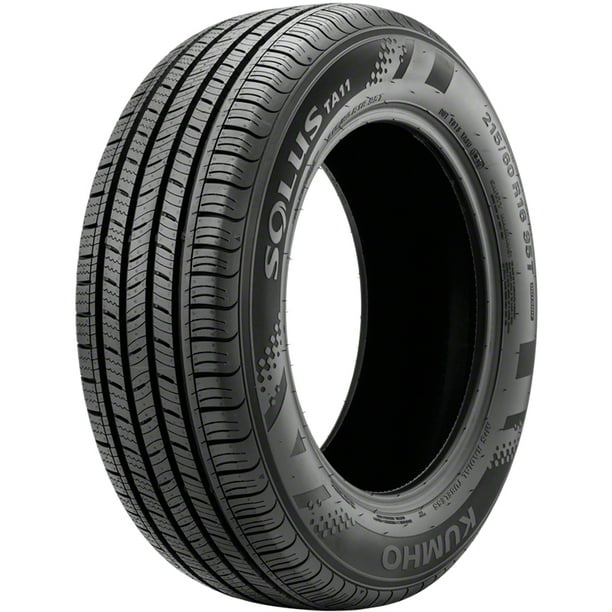 We aim to show you accurate product information. Manufacturers, suppliers and others provide what you see here, and we have not verified it.
Learn about Auto Services | Find an Auto Care Center
The Solus TA11 from Kumho is an all-season touring tire that offers drivers comfort and long-lasting value.

Bought these tires for a 2000 4Runner. My sons are driving 50 miles a day to and from college. First thing they noticed is that the gas milage has gotten better. I liked the price and the 75000 mile tread life. Only had them for a month.

A+ for snow/rain etc.

Kumho Tires are simply the smoothest, mostly carefree, tires on the market. Their quality control is really good and better than many other brands for the money. We have them on both of our cars and these are the fourth set we have bought over ten years for two different cars.

ordered 4 kumho solus ta11 to replace the oem michlins on my 2012 fwd ford escape. the mich's still passed inspection , gave 73000miles of great service but were tired/ noisy/thin. Walmart had the kumho's on rollback for 99.69$ each . they Shipped the Kumho's tires from Anaheim Ca. via fedex ground. they arrived site to store for installation in 5 days. the tire bay at walmart had the old mich's off an the new Kumho's on in about 45 mins frm the moment i walked in the door. new tire pressure monitoring seals/valve stems and lifetime mount balance all told for 483$.( hard to go wrong for that amount) the kumho's are supposed to be a 70000 mile tire , an if they give as good of service as the Mich's did I wont be putting tires on again anytime soon. on side note - the kumho's black side wall graffics look fresh an style the tire up. not sure how they will hold up to a couple of scrapes against a curb but they are attractive an freshen up my vehicles looks. so far so good. after the tire change out i did notice chips in the oem painted aluminum rims where the old oem wheel weights had been removed an a small chip at the one lug nut opening , some scratches inside the lug nut wells frm the air gun ratchet most folks wouldnt notice but am fussy with my vehicles. all in all tho the price was right, the process quick , an think that they used reasonable care in the process. doubtfull goin to a tire store woulda netted me any better rim care

Great Tires for a good price

I checked prices for this tire and found it the cheapest at Walmart. They are made in Korea but their quality is very good. The most important to me, they are very QUIET on my Honda Civic on both concrete and asphalt paved roads. There is a lot of thread on them, however, it has to be seen if they would last for 75,000 miles as their warranty states. They cancel well the impact of the road bumps and potholes on my vehicle. They even look cool/modern on my rims. Also, it looks like my Honda's steering improved. I installed them at the Walmart for $42.00 total, and that was the best deal in the whole San Diego.