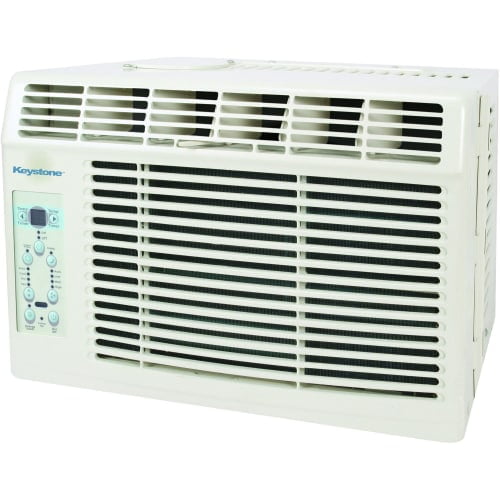 We aim to show you accurate product information. Manufacturers, suppliers and others provide what you see here, and we have not verified it.
The Keystone KSTAW06B 6,000 BTU 115V Window-Mounted Air Conditioner with "Follow Me" remote control is perfect for cooling a room up to 250 square feet. It has electronic controls with LED display and a temperature sensing LCD remote control allowing you to conveniently see, set and maintain the room temperature from across the room. This 2014 Energy Star unit includes an energy saver mode, programmable 24-hour timer and a sleep mode to save you money while keeping you cool and comfortable.

Great product for the price

I decided to have this shipped to my house instead of using the site to store method and I paid the 97 cent shipping...I ordered it on Thursday and it was supposed to be delivered the following week between Monday to Thursday...instead I had it on my porch before 11am the next morning! I purchased this unit based on another review and it lives up to what the person said, I like the fact the remote has the follow me feature and that was the main selling point of this unit over others. I have been very satisfied with my entire purchase.

I originally bought a Frigidaire FRA064AT7 from Best Buy, and had to return it due to it being one of the worst air conditioners ever. It was so loud and didn't drain properly. I saw the reviews about this keystone AC and decided to take a chance on it. Well, It has been a lifesaver. I've had it for about 2 and a half weeks now and I must say it is small, powerful, and quiet enough that you won't have any problems sleeping. I highly recommend it!

If you are wanting a quiet A/C for your bedroom then this is the one to buy! My 210 sq. ft. bedroom and bathroom stays very cool. Installation was very easy and I really like the Follow Me remote control. Comes with a 2 year warranty. I am very happy with this unit.

Fits in a casement window

This is a small 6000 btu ac and packs a big punch Exxcelent unit and small enough to fit in a casement window my alternative was spending 4 times more for a casement twice the size a remote works great as well... they even have a pad attached that meets the window sill so the metal doesn't scratch your wood first time I have seen that.

Keystone Air-Conditioner to replace old one

I had an old 6000 btu window air-conditioner that stopped running. I replaced it with the Keystone 6000 btu, which was smaller and lighter. So happy with it so far.

is working great, very quite,

Very quite, cools the room and the adjoining room too, about 350 sq. feet. Great buy, wish I needed another a/c, I would buy this one again.

If you can be patient for the few days (3 in my case) it will take for this to arrive, the Keystone A/C's with the follow-me remote is definitely the way to go! I have two small rooms in my place that I wanted to put window A/C units in. One is 10 1/2'x11' (115 square feet#, the other is about 80 square feet. From everything I read, 5,000 BTUs should be just about right. I know from previous experience definitely not to oversize the A/C for my rooms since doing so can not only drain your wallet from inefficient energy usage, but it will make your room feel uncomfortably damp, the A/C compressor will cycle frequently causing great annoyance, and your room will never be a good temperature partly because when the unit is on, the air that's blowing out will be far too cold. I had originally purchased the GE AEW05LQ 5,000 BTU A/C that Walmart sells in store after reading some reviews. After hooking it up, I found it was generally quiet, but made some irritating crackling and popping noises, even when the compressor wasn't running. This was unacceptable for my bedroom. Furthermore, like previous window A/C units I've owned, the temperature accuracy was awful, leaving the room too hot. I have two thermometers in my room that verified this. The problem with most A/C units #as well as space heaters# out there is that they have the thermostat built right into them, so they measure the temperature right next to the unit! Obviously it's not going to be accurate since the temperature right next to the unit is going to be a lot different than the temperature in the rest of your room. In fact, for my space heater in my bedroom, I purchased a plug-in type thermostat and ran an extension cord to my manually controlled space heater on the other side of the room so I could get the temperature accurate. After purchasing the GE unit, I wrote a review for it stating that they should have some sort of remote thermostat for it that you can place across the room. Well, after doing some more reading on Walmart's web site, I realized that this Keystone A/C actually has that! It has a thermistor built into the nicely designed LCD remote control for it. Finally, it's about time! The Keystone engineer that designed this feature deserves a gold star and a pay raise! Although the remote is not RF #radio signal# based, it still worked pretty well. Just FYI, the remote that comes with it uses infrared light to talk to the A/C, just like your TV remote talks to your TV. I found though the remote works even when pointed at the opposite wall facing the A/C, at least with a fresh pair of AAA batteries. Don't expect it to work behind a pillow or blanket though, which wouldn't be smart anyhow for it to get an accurate temperature reading. I'm planning on keeping the remote next to me in bed at night. The display in the remote also has a backlight as well so you can see the temperature easily at night and don't have to strain to see the temperature on the main A/C from across the room. As far as the functionality of the A/C, it's pretty good. I have a sound pressure meter #db meter#, and it's actually slightly quieter than the GE unit. At about 4 feet away it read 52db with the fan speed set on low and the compressor running. The GE unit was about 53-54db. It doesn't make any super irritating sounds like the GE A/C, though the compressor has some excess vibration in it. When just the fan is on the lowest speed, it's quiet. I did have to tighten up the faceplate a bit by wedging some foam and paper behind it since the faceplate tended to vibrate on occasion when the compressor was on. You can tell if it's the faceplate, and where it needs to be tightened up by just pushing on it in various spots. I also had to cover up the piezo buzzer in it with some wax since the beep every time you press a button was ridiculously loud. It took my about 20 minutes to fix both issues. Don't let this deter you from getting this A/C though if you have someone slightly technical around - this was a small price to pay for such a wonderful A/C. FYI, the unit comes apart fairly easily to clean inside, and get to everything. If you have anyone handy who works on cars, etc., there shouldn't be any problem fixing the two noise gripes I just mentioned. Everything is held together with Philips head screws, and the faceplate comes off by taking the two screws out on either side, then pulling outward on the top and sides of the faceplate to release the locking clips. BTW, if you want to reduce the volume of the piezo buzzer by sticking some wax in it #Mack's silicone ear plugs from Walmart work well#, it is actually not in the faceplate electronics, but behind where the faceplate buttons are in the A/C on the left side. Wrapping up, Walmart should definitely be selling these in their stores! However, in order to sell these to consumers and justify the extra $20-40, they need to put up a sign to explain to the average consumer what an amazing benefit having as thermostat in the remote is to get the temperature accurate in your room, and where you're sitting! Are you reading this Walmart?? I will be returning the GE A/C to the store, and purchasing another of these, though this time it will be the 5,000 BTU model since the 6,000 was a bit too much for my rooms. Not only that, the price just dropped down on the 5,000 BTU model from $179 to $149 – what a deal!

This is my third Keystone A/C

We live in a 100+ year old house with no duct work, so window A/C units are our best option. This unit is the third Keystone unit I have purchased and I believe they are worth every penny. We have the 12000 btu unit installed on our main floor and a 6000 and 5000btu upstairs. They are quiet and efficient. Another great feature is their compact size. Most of our windows are very narrow, but the Keystone air conditioners are an inch or two narrower than most of the other brands out there and this really helps with the old windows. Also, all three units have a thermostat built into the remote control. This allows you to set the unit to a particular temp and don't have to worry about the compressor shutting off when it gets cool right next to the air conditioner, so the temp you set the A/C to is more likely to be closer to the actual room temp. All in all I think the Keystone air conditioners are a very good value.

Excellent packaging and the unit arrived in great shape. It has a nice design and installed very easily. Disappointed in the lack up ability to change air direction up or down. Only left or right. Still in the bedroom with 8 foot ceilings it seems to be sufficient. A ceiling fan would be a good air circulator. We choose not to drill holes into our new and expensive vinyl windows for installation, but found white Duck tape and a block on the top of the lower sash as more than adequate. The lower sash when in the down position secures the window so securing the sash is very adequately done by the block and tape. The tape is more effective as a block to bugs and heat also. The accordion style expansion units on the side are poorly designed so the white Duck tape comes in handy here also. Overall it spits out very cold air and very quietly even when the compressor cuts in. The remote temperature sensor is brilliant. Very happy with the unit so far.

This is a great product. It does not take long for the room to cool off about 20 minutes tops. It came just in time right before the second heat wave in NYC.

1. It draws in window from the front/back of the unit.
by Product Expert
1 Answer