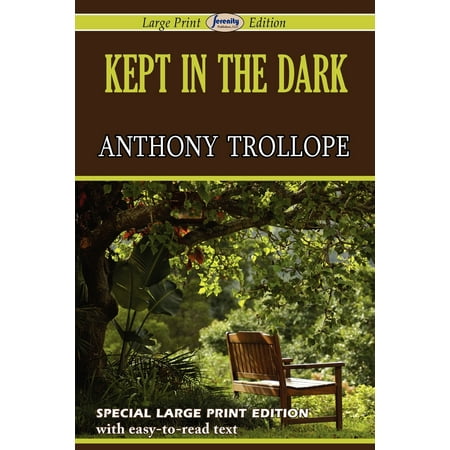 Kept in the Dark

Or get it by Fri, Feb 21 with faster delivery

We aim to show you accurate product information. Manufacturers, suppliers and others provide what you see here, and we have not verified it.
Kept in the Dark Kept in the Dark (Large Print Edition)

Remarkably short for a...

Remarkably short for a Trollope novel, it felt a bit like an undeveloped first draft or proposal. Cecelia gets engaged to Sir Francis, but becomes disenchanted with him and breaks off the engagement. She and her mother go abroad to get over this episode and there she meets George Western and marries him. For one reason and another she never gets round to telling him about her previous engagement and eventually the meddling Sir Francis spills the beans and George is devastated. The first few chapters dealing with the period up to the breaking off of the first engagement are written in rather a superficial style, but then things settled down to unremitting misery for most of the rest of the novel. Many of the emotions expressed and positions taken by Mr and Mrs Western echoed those developed at greater length in "He Knew He Was Right". Miss Altifiorla (difficult name!) was a good character, but Sir Francis got more and more dastardly as the book went in. What was the wrong he wanted revenge on Mr Western for? Was it just the questioning of the gambling debt? I liked the roles of Sir Frnacis' sidekicks in speaking reason to him. I liked the explanation that Cecelia first does not tell George her story because it is so similar to his own that she doesn't want him to think she is mocking him - a very British sense of embarrassment! I thought Trollope was interesting on the expectation a Victorian husband had that his wife should be pure and unsullied by any former attachments to anyone else. Also on whether a husband should admit to having been wrong and risk his authority. Things got wound up pretty promptly at the end - it seems as if Trollope were just going through the motions.

Ive been intending on...

I've been intending on reading Trollope for quite some time, and this one won... well, it's short!This edition is also a direct photostat from the original Victorian serial, which is aesthetically charming, but slightly annoying to read (two columns per page). My opinion? Well, this is not Great Literature,regardless of the reviews out there that go on about Trollope's 'insight into humanity' in this work, blah, blah, blah. This was written as a serial, and it is very much a soap-opera-esque entertainment. It effectively keeps you on the edge of your seat, going "OMG! What will happen next? Will they reconcile? Can I just strangle her now? Or at least give her a good shake? Can I kick him in the seat of his pants?"All the characters are bloody idiots, repressive Victorian society or no.Yet they are compelling.Our main character, Cecilia, dumps her fiance when she realizes the spark of romance just isn't there. To help her get over it, her mom takes her on a trip. While traveling, she meets a suitable man who's just been dumped by his fiancee. She feels like it would be trying to steal the show (and just awkward) to tell him the story of her prior relationship, so she doesn't. They become friends, and she realizes that this guy actually knows - and despises - her ex. Which makes it even more awkward to tell him about it. Then they get engaged... and married. How can she tell him she was engaged to this man he hates now? But it's impossible that he'll never find out: they move in the same social circles, after all - and Cecilia also has a frenemy who keeps threatening to tell. Oh, the drama. (It's a lot more complicated; the above paragraph is vastly simplified.) It's not a wholly satisfying novel; Trollope wants to tie everything up neatly, but while Cecilia's dumbassery is something I could have a bit of sympathy for, her husband was really just a jerk who deserved some just desserts.

Kept In the Dark, sort of "He Knew He Was Right-lite" is a Trollope novella for completists, i.e., not exactly one of his best efforts. Very repetitive to the point where I could skip an entire page and not miss anything. Endless hand-wringing over a trivial episode. Well, it was a paycheck, and that was what AT was looking for, I guess.