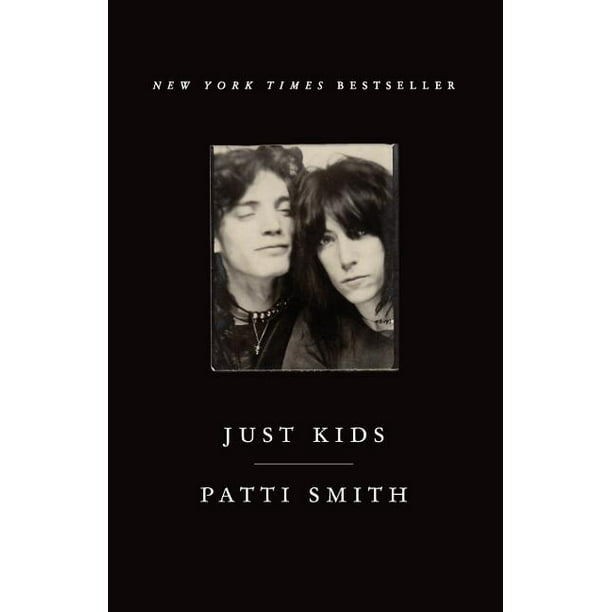 The legendary American artist offers a never-before-seen glimpse of her remarkable relationship with photographer Robert Mapplethorpe in the epochal days of New York City and the Chelsea Hotel in the late sixties and seventies. An honest and moving story of youth and friendship, Smith brings the same unique, lyrical quality to Just Kids as she has to the rest of her formidable body of work--from her influential 1975 album Horses to her visual art and poetry.

Patti Smith would evolve as a poet and performer, and Robert Mapplethorpe would direct his highly provocative style toward photography. Bound in innocence and enthusiasm, they traversed the city from Coney Island to 42nd Street, and eventually to the celebrated round table of Max's Kansas City, where the Andy Warhol contingent held court. In 1969, the pair set up camp at the Hotel Chelsea and soon entered a community of the famous and infamous--the influential artists of the day and the colorful fringe. It was a time of heightened awareness, when the worlds of poetry, rock and roll, art, and sexual politics were colliding and exploding. In this milieu, two kids made a pact to take care of each other. Scrappy, romantic, committed to create, and fueled by their mutual dreams and drives, they would prod and provide for one another during the hungry years. A true fable, Just Kids is a portrait of two young artists' ascent, a prelude to fame. --The Rumpus• Author: Patti Smith • ISBN:9780060936228 • Format:Paperback • Publication Date:2010-11-02

I have to admit, I knew very little about Patti Smith or Robert Mapplethorpe prior to reading "Just Kids". I'm so glad that my ignorance didn't stop me from picking this memoir about Patti's relationship with Robert, and the story of their lives together. Patti and Robert were in their late teen years when they first ran into each other in New York City. Drawn together by their shared need to create, Patti and Robert began their relationship with almost nothing, barely getting by without money to even eat consistently. Patti eventually found work in bookstores and reviewing records for magazines and Robert picked up odd jobs or occasionally by hustling for sex with men on 42nd street to bring in extra income. Patti dreamed of becoming a famous poet and Robert was a mixed media artist, without any connections to sell his work.Life began to change for the couple, who were primarily roommates and best friends, after they moved into the famous and historic Hotel Chelsea, where emerging rock stars, artists, and writers of all types lived in the 1960's and 70's. Having grown up in a conservative Catholic family, Robert struggled to understand his homosexuality and began exploring his conflicts through his art and relationships with men. Patti began to have other relationships as well, mostly shortlived but supportive, as both she and Robert began to cultivate small successes in the art world. Robert was particularly drawn to the work of Andy Warhol and he coerced Patti to come with him to hang out in the places those in Warhol's inner circles were known to frequent. As both began to achieve real success, Patti met the man who would become her husband and Robert drew close to his partner and each went their own way. Within a few years, however, Robert contracted AIDS, which eventually lead to his untimely death at the age of 42. Patti's memoir of their lives together is an interesting and emotionally evocative story of two young kids without anything but a love for art and music, who cultivated creativity and success in the other. I really enjoyed reading about their lives and I was particularly drawn to Patti's descriptions of Robert, as she described him as a haunted but passionate soul, consumed with exploring and exposing the forbidden in society. An excellent and very well written account of love, art, and the NYC art scene in the 60's & 70's.

Reviewed by voraciousvoracious
Written by a librarything.com customer.
Helpful?
Average Rating:(5.0)out of 5 stars

An absolutely beautiful story of best friends, their art, and the impacts of one upon the other. We perceive many artists through their work, but we don't really know them. In this memoir Patti Smith gives us all a gift, a glimpse of the magic and love shared by she and Robert Mapplethorpe, and how they evolved and grew into themselves. Smith is a really gifted writer and this work is a pleasure to read. The most fascinating and best written biographical work I have read since "Running with Scissors."

Reviewed by eenerdeenerd
Written by a librarything.com customer.
Helpful?
Average Rating:(5.0)out of 5 stars

Only knowing Mapplethorpe as the guy who did the explicitly erotic photographs, and Smith as one of my favorite singers, this book was pretty enlightening. Seeing Mapplethorpe through Smith's eyes softens the public persona of him some. Smith headed to New York from New Jersey to pursue her passion, art. Along the way she met up with Mapplethorpe, who rescued her from a bad date, and the two become best of friends and lovers. Inseparable, if not physically then in spirit, they remained by each others side until Robert's death from AIDS in 1989. While Patti traveled to Paris, Robert went on to discover different relationships with men. It seems, back in the 70s, that it wasn't always possible to be openly gay and and perhaps it was something that he continually fought with himself. He kept a physical relationship with Patti for some time despite the evidence that he preferred men. While I can't imagine how that could make for a happy life, denying part of who you are, being with Patti obviously made him very happy. Smith describes living at the Chelsea Hotel and hanging out with the likes of Jimi, Janis, Burroughs, and Harry Smith. And a lot more; those two really got around. She also chronicles the "luck" and hard work that helped make Mapplethorpe and herself the legends that they are today.

Reviewed by manadabombmanadabomb
Written by a librarything.com customer.
Helpful?
Average Rating:(5.0)out of 5 stars

Though I just cringe w...

Though I just cringe when I hear about people choosing to live without basics like a bathroom or a refrigerator, I am impressed by the willingness to suffer for art. Is it necessary, I wonder. Smith's writing is absolutely wonderful; it's like a warm blanket and a cup of tea. She has such a positive voice, even though many of the events she describes are pretty harrowing. It's an inspirational read.

Reviewed by periwinklejaneperiwinklejane
Written by a librarything.com customer.
Helpful?
Average Rating:(5.0)out of 5 stars

Early in their friends...

Early in their friendship Patti Smith and Robert Mapplethorpe donned their bohemian finery--she her "beatnik sandals and ragged scarves" and Robert "love beads and sheepskin vest"--and went to spend an afternoon in Washington Square Park. As they walked toward the fountain an older couple took note of them. "'Oh, take their picture,' said the woman to her bemused husband, "I think they're artists.' 'Oh, go on,' he shrugged. 'They're just kids.'" Just Kids is a sweet, charming account of the time Patti and Robert spent together--as lovers, as friends, as growing artists--in New York in the late sixties and early seventies. Smith's prose is lovely, at times oddly formal, but always evocative and fun. She recounts their extreme poverty, as she worked as a bookseller at Scribner's to support them, while Robert did odd jobs and both worked on their art. They lived among artists and poets and Robert aspired to society, first working them into the Warhol set (although rarely in the immediate orbit of the man himself) and then beyond. Smith's story is packed with anecdotes of meetings--sometimes chance and fleeting, sometimes of longer duration and intensity--with such people as Jimi Hendrix (who took pity on her when he came upon her, sitting on the steps to his Electric Ladyland studio but too shy to go in, and chatted her up for a few minutes) and Allen Ginsberg (who bought her a sandwich and coffee at the Automat when she didn't have enough money, and several minutes into their meal together looked at her intently and asked "Are you a girl?" She got the picture immediately, but he said "my mistake," and they continued their meal amiably). Just Kids is not so much a study of the development and growth of the art itself as it is about the two kids becoming artists. Smith's narrative skims across the taking off of their two careers like a stone across a pond, touching down lightly here and there with a story or an anecdote or a description of a photograph or a poem. The book is illustrated with Smith's drawings and Mapplethorpe's glorious photographs, and scattered throughout are poems and songs (including, in the coda at the end which tells of Mapplethorpe's death from AIDS in 1989, the last photos he took of Smith and her family and the poem she wrote for his memorial service at the Whitney Museum).

Reviewed by BeckyJGBeckyJG
Written by a librarything.com customer.
Helpful?