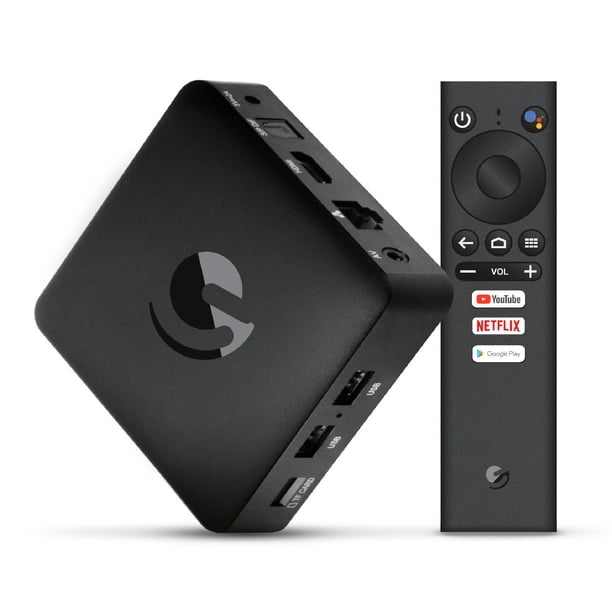 I love this streaming device! Not only does it have all of what you love to stream,it is like having your own google assistant as well.It plays any music or answers any questions you may have,keeps me in touch with the weather or anything else I may need.It loads up very fast and the resolution is picture perfect.Everything you need to get you started is in the box and set up is very easy,you will be streaming happily in no time!!

This review is for the Jetstream 4K Ultra HD Android TV Box with Voice Search Remote - Compatible with Google Assistant. I found the directions to be very good for an easy set up. We set this up on our tv in less than five minutes. We are really enjoying the voice search remote feature. The android TV box has also enabled our TV to do Netflix which it could not before. Impressive amount of free trials that come with this. HDMI cable was included. Supports 4K Ultra High definition, and features a high performance Quad-core CPU, and a 3+2 Core GPU that makes gaming faster. This is a big plus with my kids. We are loving this Jetstream 4K Ultra HD Android TV Box, and highly recommend to everyone.

This is one of the best devices I have used. Got this actually for my mom but of course she cannot use it. I set it all up and netflix is faster on this than on my 75inch tv.

Great product with the easiest installation and setup possible. Great quality and low energy use!

The voice activated remote is completely user friendly.i thought i would be having to go through a setup process for it.But TOTALLY did NOT.AWESOME!And it so far has matched everything i have said word for word.It has very simple installation instructions and also comes with USB and memory card slot you can use to play your own media.It gives you recommended and popular app suggestions to download which i thought were "right on" for a goid start,especially for people that are familiar with "smart tv's". The one thing that i did notice though is that i basically had to download one app at a time.Otherwise they would just keep showing as pending.I am not sure if that has to do with the type of internet connection you have,mine was through my phone hotspot.But that did make it more time consuming than i woukd have liked.

Unimpressed by this product

I want to start this review by stating that I received it for free in exchange for my honest opinion. I say that because I truly don't like giving mediocre reviews and I do my best to give every product I receive for review the benefit of the doubt. That said...here goes:

I have several years under my belt with using SmartTVs and Roku devices, etc. The setup of this was scarily easy. And by scarily I mean that it connected to my Google account and did absolutely everything automatically - I didn't even have to type in my WiFi password, Netflix password, etc. That type of automatic permissions makes me a bit uneasy.

Once connected, the device itself works well and the picture is good.

Here's my big gripes and why I'm only giving three stars: The pre-installed apps does not include Amazon Prime and it will not find that app in the GoogleApp/Play store to download/install. Also, despite messing with the settings/configuration multiple times, this thing is not only powering on by itself (and displaying a screen saver) when I'm not near it, but it's also powering on my TV and changing the input so it will be on the screen. This morning, my TV came on at 2am and startled me awake...and I've been awake ever sense. Ain't nobody got time for that! My remotes are stored in my nightstand so nothing was accidentally pushed or triggered to cause this other than the device itself.

If you have never had a SmartTV or Roku-type device, you might really enjoy this, but for me, after trying it, I have never loved my Rokus and SmartTVs more. I know this device is supposed to offer more features, but I found nothing to keep me using it over my other Smart devices. I can screen cast to my TVs from my phone/tablet, voice search via my phone and/or Roku, and hopefully sleep through the night once this device is unplugged and hidden away in a drawer. :(

I find this product to be fairly straightforward to setup and use. it does everything that the box says it does plus more. set up was fairly easy. straightforward just follow the simple directions when you first turn it on. overall I'm fairly happy with the product.

1. If you go to the play store and search for 'media players' the popular ones will support just about any type of video file you'll need to play.
by PCgamer
00
2. This device will support video formats such as AVI, MP4.
by Ematic Guru
00
3. Avi, mp4
by eMaticSupport
00
3 Answers

1. No, it cant be used as a Plex Server.
by CommunityAnswer
00
2. This cannot be used as Plex server.
by Ematic Guru
00
2 Answers

1. This device has built in Netflix, you simply need to log into your account and you're all set.
by Ematic Guru
00
2. The box does not need to be hooked to your phone. It connects to your TV with an HDMI cord and has an android operating system that is compatible with Nextflix.
by CommunityAnswer
00
2 Answers