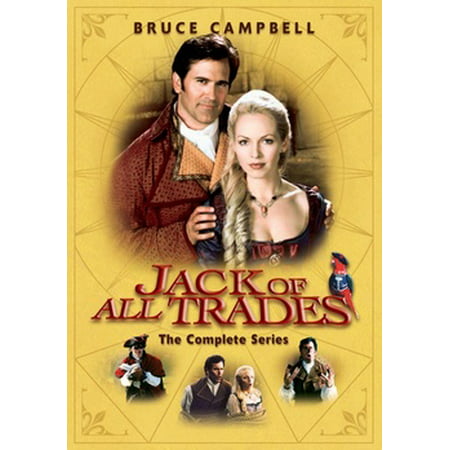 Jack of All Trades: The Complete Series (DVD)

We aim to show you accurate product information. Manufacturers, suppliers and others provide what you see here, and we have not verified it.
Details Coming Soon Jack of All Trades: The Complete Series (DVD)

?? This product can expose you to some chemicals, which is known to the State of California to cause For more information, go to.xn--ivg www.p65warnings.ca.gov

Playing "Jack Stiles," an American Spy, Bruce Campbell has made me laugh once again, with his irreverent humor. Any fan of his would recognize what I am talking about, and hopefully more people out there will get on the Bruce Campbell bandwagon. "Jack" teams up with British agent and inventor "Emilia Rothschild" to thwart the efforts of Napoleon (played by Vern Troyer!) and France, on the tiny East Indies island of Palau Palau. There are 22 half-hour episodes of this show, which were made in the year 2000. It is not rated, so I don't think it would necessarily be good for very young children, but all of you grown ups out there in need of a laugh, I totally recommend this three DVD set. Bruce Campbell is great fun to watch, in my book!

Was a little wary of the series, but I could not stop laughing. Not for little kids mind you. Think an adult version of Hercules the Legendary Journeys, which Bruce played a part in, The King of Thieves Autolycus.

jack of all trades

great B movie series.. what they don''t have in money they make up in wit.. it rocks..

bruce at his best. and a buetuful women

Jack Is Worth The Trade

This box set is the best one of his so far. All of the episodes contain his quick witt and know how to make anything look good. So I would say this is a must by if you are a Bruce Campbell fan....