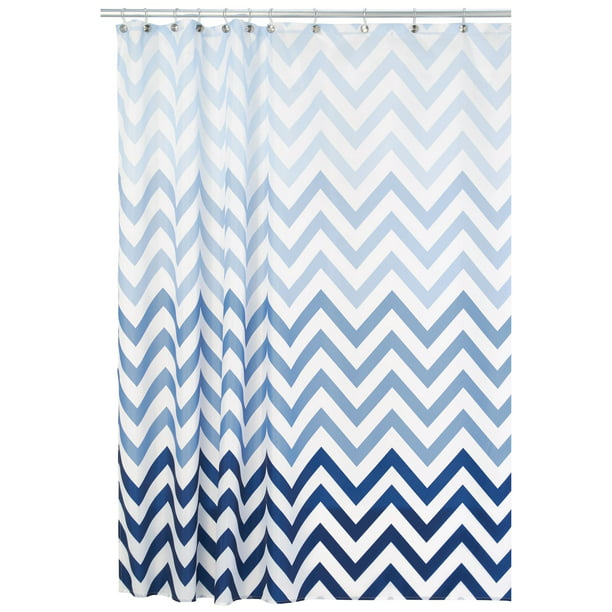 What others said when purchasing this item
goes with wall tiles and paint color in my bathroom
peanut, purchased on June 28, 2020

This trendy designed shower curtain is 72' W x 72'H which is standard size. It is made of a machine washable 100% polyester and also has a reinforced header (TOP) and twelve (12) button(shower ring) holes for long lasting use. This curtain does NOT contain magnets or metal at all. The color is white with a chevron design with the awesome ombre effect of (4)four shades of blue . Navy, Royal, Sky and Pastel Blue is the best I can describe all the shades of blue. I love blue and I really love this shower curtain.I found it to be very easy to hang and very easy on the eyes and also while having that great pop of color without being too plain or too feminine. It would be great to use anywhere in my opinion because it feels quality made and looks that good! There are also other very pretty colors available for you to choose from Mint, Grey and Coral to update the look of your shower and really makes the whole bathroom look wonderful. It is recommended that a plastic liner (not included) and hanging hardware (not included) be used along with this InterDesign Ombre Chevron Shower Curtain. I RATE 5 STARS!

I have blue and white tile in my bathroom so this ombre chevron blue shower curtain is a nice addition. It is made of 100% polyester and has reinforced buttonholes. It measures 72" wide by 72" long fitting any standard size shower/tub enclosure. I washed this before putting it up as it was very wrinkled out of the package. I used liquid fabric softener which worked well in releasing the wrinkles.

This Ombre Chevron shower curtain is an attractive design and it is a bit different in the way the design is presented. At the near bottom the colors of the chevron design are bold dark. The colors gradually are lighter as the chevron design nears the top. The way the colors are layered, it makes for easy accessorizing, not to mention attracting the eye. Although this shower curtain repels water, it is 100% polyester and best to use with a liner. Since this shower curtain is polyester, it has a nice silky type feel to it and flows very nicely when hung. It has very strong reinforced buttonholes for your shower curtain hooks of your choosing. I want to stress that this shower curtain does not have grommets. The length and width is 72 inches by 72 inches and accommodates most all standard size shower/tubs. I should also stress that since this IS a polyester shower curtain and not a liner, it does not have magnets in the bottom. Care instructions is on a sewn in label and is simple to wash and dries quickly. It is nicely packaged in a resealable plastic see through pouch and would make a nice house warming gift, wedding shower gift, etc. II received the blue and it is very pretty but there are several colors to choose from. The chevron design is also very family friendly in that it can be used in family bathrooms, teens bathroom, or children's bathroom. It appears to be of very good quality.

This is a nicely made curtain . It is made of polyester 100% with reinforced button holes , regular size 72 inches by 72 inches. It is to be used as an outside of an waterproof curtain . The color pattern starts out a light blue then gets darker as it goes down . It will take a few days for the folded marks to go away .

This is a real sturdy and vibrant colored shower curtain. I like that even though it's recommended to buy a liner with the curtain, I've found it has worked well without it meaning no water in the floor. The blues on the curtain just pop out and really call attention to it. It has added a touch of masculinity to my bathroom for my husband and son. Overall good product and woukd recommend this to others.

Attractive, and so easy to clean!

I would recommend hanging this shower curtain and a liner as soon as possible after your usual shower time, so that whichever liner you've selected will have time to lose its "plasticky" odor before the next day's shower. (In our case, the liner had even more time to air out while we replaced a water heater -- but that's another story.) The InterDesign fabric shower curtain does NOT have any odor issues when new, however.

In short, this shower curtain comes in a pretty pattern in our favorite colors, and should be easy to keep clean -- what's not to love? Recommended.

The InterDesign Ombre Chevron Shower Curtain is a pretty decent curtain. The main reason I picked it was because I liked the color scheme (light blue, dark blue, and white) and pattern of the shower curtain. I am not absolutely in love with the zig-zag pattern designs, but it does not bother me so much to the point where I dislike it. When I take a shower, I want a peaceful and calm atmosphere, so the last thing I want is a really loud, obnoxious designed, and vibrant colored shower curtain. This shower curtain has 12 reinforced button-holes that work with most standard curtain rings. The curtain is also made of 100 percent polyester construction, which makes it conveniently machine washable. The curtain itself is not too thick or thin (but I consider it more on the thinner side). Overall, I think this shower curtain is pretty decent. The main thing I love about is the combination of colors. I think the combo of light blue, dark blue, and white goes very well together. It also helps keep my bathroom floors clean by preventing water from spilling out of my bathtub. Also, I personally prefer shower curtains that are opaque, instead of clear/transparent, because I like the privacy. If I accidentally forgot to lock the bathroom door, I do not have to worry about someone walking in on me, because even if he/she did, the shower curtain will provide cover.

The InterDesign Ombre chevron shower curtain was sent to me by the Walmart Spark review program. The measurements of the curtain are 72" x 72" which will fit a standard shower. The shower curtain colors are vibrant and rich. There is even a light sheen on the fabric which makes the curtain shine in the light. The Ombre look is beautiful along with the Chevron pattern. A light gray/blue begins at the top and end with a dark blue. I was drawn to the fact that the curtain has reinforced holes for hanging. Since my kids like to pull on the shower curtain a little too hard, I always have problems with the holes ripping. It was easy to hang because the hole size is large. The curtain should be used with a liner because it is fabric which retains water. The material used for this shower curtain is 100% polyester. A Chevron pattern gives the curtain a classy look to add to a shower or bath. There are matching options, such as a rug, that are available as matching purchase options. This curtain seems to be a heavy duty fabric that will last for a very long time.

provide for easy,confident installation with your choice of mounting hardware (not included).

The Interdesign Ombre Chevron shower curtain design in varying shades of blue,lighter from top to

dark at bottom.The shower curtain allows sunlight to shine through freely at the top.The geometric design adds contemporary flair to a modern bathroom.

Ok, so I am reviewing the InterDesign Ombre Chevron Shower Curtain. I chose this one because I like the design and color. There is not a whole lot I can say about this curtain. I would say it is an average curtain. If your looking for a cheap curtain with no bells and whistles this is the one. I wish I had the floor mat to match it though. I would like to note that it did not come with reinforced button holes like the package stated and shows in the picture. It shows actual metal rings in the picture on the package it came in. And it says, reinforced metal ring button holes. I included a picture. It just has standard stitched slits. All in all it is serving it's purpose though. Not much to complain about really. And I do like the color and pattern.