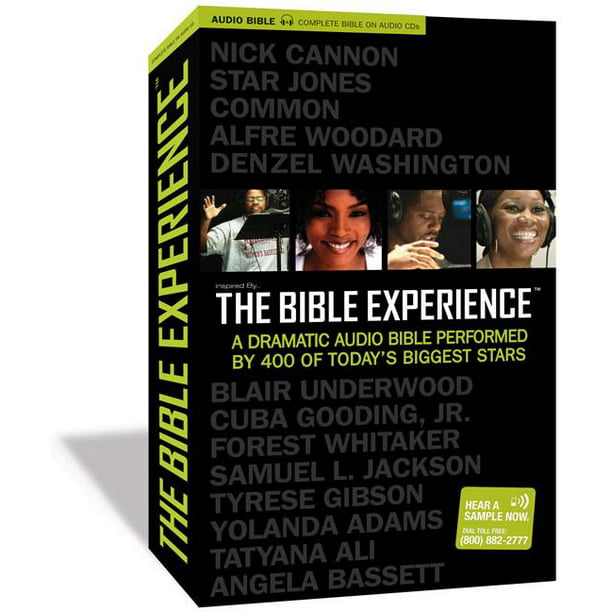 The most ambitious, critically-acclaimed presentation of the Bible ever produced, Inspired By ... The Bible Experience features a star-studded cast of almost 400 performers, including multiple Oscar, Grammy, Emmy and Golden Globe winners. The dramatic performances are set to an original musical underscore by the Prague Symphony Orchestra and Hollywood-style sound design created at Technicolor Studios.

Honors include the 2007 Audie Audiobook of the Year (the highest honor of the Audio Publisher's Association), an AudioFile Earphones Award, and a nomination for an NAACP Image Award.

My Mom is in her seventies and enjoys reading her bible every morning. As she is "gracefully ageing," her eyesight is not what it use to be so when I saw " The Bible Experience " and began playing the videos on-line to give it a closer look, I knew I had to purchase this for her. She absolutely "LOVES IT!!!" The first CD I put in totally blew her away. She's had it a week and when I call her in the mornings I always ask "what are you doing?" her reply is me and Vann (her husband) are listening to the Bible. God Bless all who had a hand in this awesome production. I must also say, I researched prices and no other place I looked or called offered the "Complete Bible" cheaper than Walmart !!!! It is truly one of the best gifts I've ever given.

Finally a way I can enjoy the bible and still get other things done. Was everything I expected it to be and more. It comes it a very nice organized carry case and I love hearing the words being expressed instead of just being read to you. It's wonderful for those times when I just don't have time to sit down and read my bible. My grandchildren enjoy listening as well. The sounds and different voices help to keep them interested even when they don't fully yet understand the words. I am totally satisfied with my purchase.

It's like being transported to biblical times. Well done! Highly recommend it. The cost does not equate to the value that you will get from listening, learning and enjoying the bible in a different way.

The price was better than many others. The CD's make you feel as if you are right in the action. I will now be able to complete the entire bible!!!!!!

This is such a great adventure. It is wonderful to hear all of the side effects and action as the bible unfolds great for all ages and fun too. I am listening to it as I drive from place to place and trip just flies by