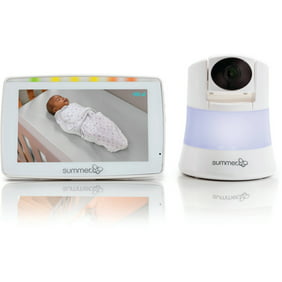 We aim to show you accurate product information. Manufacturers, suppliers and others provide what you see here, and we have not verified it.
The original Infant Optics DXR-5 is a compact video baby monitor that will give you a peace-of-mind no matter where you are in your house. Designed with portability in mind, its slim and lightweight body frame makes it easy to monitor your baby even with an active lifestyle. Equipped with a 2.4GHz digital wireless FHSS communication link, the DXR-5 is 100 percent secure and provides superior sound and video clarity. The video monitor features a 2.4-inch super bright TFT screen, which is powered by a rechargeable lithium-on battery that allows hours of portable usage. Boasting a 150-foot indoor range and an impressive 800-foot outdoor reception range, you will always be connected, no matter where you are in the house. The DXR-5 features all the reliability and intuitive functionality you would expect from Infant Optics.
Infant Optics DXR-5 2.4GHz Digital Video Baby Monitor with Night Vision:
Questions about product recalls?
Items that are a part of a recall are removed from the Walmart.com site, and are no longer available for purchase. These items include Walmart.com items only, not those of Marketplace sellers. Customers who have purchased a recalled item will be notified by email or by letter sent to the address given at the time of purchase. For complete recall information, go to Walmart Recalls.

We have had the Infant Optics DXR-5 for two weeks now and LOVE it! It is easy to use and provides excellent optics and sound any where on our property. It is extremely portable which is great, and the video, even at night is sharp and crisp. Definitely recommend this system...

Easy to set up and works great.

Ordered the Infant Optics Baby Monitor to keep an eye on my 94 year old mother who has recently moved in with me. It was easy to set up and I got a picture immediately. I am not real technical but this was so easy that even I could do it. It gives me peace of mind as now I don't have to keep going in and checking on her. I can see her easily and know when she is trying to get up.

I did A LOT of research on monitors and after recommendations from personal friends, went with this monitor. We like the system so much that we purchased a second camera for our second baby's room. I recommend this unit to everyone I know. There is no better system out there for the price and customer service. Pros: Auto mute - turns to 'sleep' mode when baby is quiet and sleeping, which also eliminates any white noise. It's the only reason I got sleep in those first crucial months with baby and stayed sane! Auto infrared - automatically turns to infrared when it gets dark enough, allowing you to see baby clearly day or night. Range - We have a 3 floor house, and it reaches in all rooms. Even on our neighbour's back porch and to our garage! Mounting - variety of mounting options let's you angle and position the monitor anywhere throughout every stage of baby's life easily. Cons: Antenna: The antenna on our first monitor broke. But after receiving a second one under warranty, it's been perfect! To turn on the monitor - you have to turn on the power button AND press any other button on the monitor to bring it out of auto mute/sleep mode. I didn't know this at first, but it's not a big deal. Delay - there is a tiny bit of a sound delay when baby makes a noise at first to bring the monitor out of auto mute mode, but it's honestly 1 second. Customer service: Was fantastic! We emailed them when our antenna broke and they asked us to take a picture of the box we were mailing it back in and they immediately sent us a replacement at no charge. It took less than 1 day! They were responsive and positive, and very concerned that we have a wonderful experience with their product. Which we have and will continue to do.

I love this monitor! I'm actually looking to get a couple more cameras since you can link four cameras to the monitor! The picture comes in clear, you can adjust the brightness and sound, there's a little alarm if it goes out of range, it's sound-triggered so that it'll turn the volume on, for lack of a better word, when there's a sound in the nursery. It's a good value for the cost - with as expensive as babies are I wasn't fond of spending hundreds and hundreds of dollars but the Infant Optics camera is great and definitely worth it.

Very clear view on the screen. Has a few modes such as VOX and automute but I like turning all of them off, burns the battery faster but it's fine if you have it plugged in. Sound quality and signal coverage is much better than the previous summer monitor I owned. Five stars!

I really love this monitor. It's a rather basic monitor but has enough features to help us sleep through the night without worrying. The video clarity beats all the monitors that we've used before. I like the auto-mute that cuts out the white noise you usually get with baby monitors.

I purchased this baby monitor a few weeks ago and it has been great! I didn't have any issues with it interfering with my router for wifi. It has excellent night vision! I can also pack it all over the house with me and see what my 6 month old is up to, what a lifesaver! For the price it's great!

I am on baby #3 and wish SOOOO much that I would have bought this on my first kid. For the other two we used an audio only monitor. The one we used for the other two would always be static-y and eventually started picking up other signals. My mom bought this monitor for my third baby and it works wonderfully! I love how the audio only kicks in when there is something worth knowing about. That way you are not hearing static. The night vision works well. The only thing I haven't figured out yet is how to mount it to get a good picture. I actually stacked boxes on top of each other next to the crib and put it on top of there.

Range was not as far as advertised

This would have been exactly what I wanted, but the range was not quite far enough for my needs even though the distance between monitors should have been okay according to the manufacturers specifications. When I moved the unit closer, it was very clear and worked great. It would be perfect for a smaller home.

Pros - good screen size. Good price. Camera is very flexible. Brightness and contrast is better than 2 other monitors I've tried. Real time video also better. No delay. Cons- feels very cheaply made but durable if u can believe it. Sound is very poor. This is the only real problem. If you have it on auto voice detect there's also a terrible delAy. I hear her crying in the other room before I hear it out of the monitor. I will return this when I can find a monitor with all the features I want. If you don't want to spend a lot this is the Best monitor for the price. The other 2 I tried were more expensive and we're still not as good as this one.

1. The camera uses an AC adapter.
by CommunityAnswer
Helpful?
2. No, the camera needs to be plugged into an outlet.
by MamaJ
Helpful?
2 Answers

1. Yes, you can mount the camera.
by CommunityAnswer
Helpful?
2. Yes, it certainly can
by MamaJ
Helpful?
2 Answers