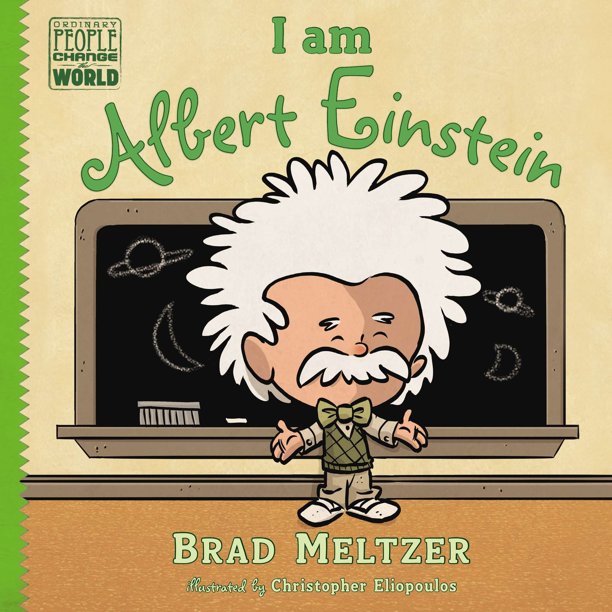 I am Albert Einstein

We aim to show you accurate product information. Manufacturers, suppliers and others provide what you see here, and we have not verified it.
We can all be heroesWe can all be heroes. That’s the inspiring message of this New York Times Bestselling picture book biography series from historian and author Brad Meltzer.

Even when he was a kid, Albert Einstein did things his own way. He thought in pictures instead of words, and his special way of thinking helped him understand big ideas like the structure of music and why a compass always points north. Those ideas made him want to keep figuring out the secrets of the universe. Other people thought he was just a dreamer, but because of his curiosity, Einstein grew up to be one of the greatest scientists the world has ever known.

What makes a hero? This lively, fun biography series by best-selling author Brad Meltzer answers the question, one great role model at a time.

Similar to the Rosa Pa...

Similar to the Rosa Parks book, This biography tells the story of Albert Einstein. I like that it uses cartoon like characters and comic style, because it makes it more easy to relate to for children. I also like that the characters are well developed and have their own voice, and are both humorous and factual at the same time. The big idea here is to tell about Einsteins life and that you should never stop asking why.

This is a series of books that are biographies. These biographies are done in such a way that the person is talking to you and as you read you are learning all about the person and what they did. In the story, I am Albert Einstein, the reader learns about Albert Einstein. How he was a dreamer and a thinker? How his favorite question was "why?" I liked this book a lot because it was humorous but I learned a great deal about Einstein. The story is told in first person and that I believe makes it so much more interesting. Learning about Einstein through his eyes made him seem more like a real person. The biggest moment in his life came when his father gave him a compass. He says he was fascinated by how the compass worked. "Right there, I could feel it: There was something behind things, something deeply hidden." The compass made him curious, "Why did the universe behave the way it did?" Today people realize that Einstein was a genius but when he was a young child people believed he was a daydreamer. Can't one go hand in hand with the other? The writing is appealing because you have the story being told by Einstein and then on every page there are conversation bubbles. These bubbles give the reader a chanced to over hear conversations that Einstein is having with his family, friends, teachers, and colleagues. He often says in the story that he never stopped thinking about how things worked and that his thinking eventually lead him to his greatest achievement: The Theory of Relativity. The illustrations enhance the story. The best illustration is Einstein all throughout the book. As a little kid he has the typical Einstein hair and mustache and he never really grows into it. However, if you ask anyone to describe Albert Einstein, Brad Metzer nailed it beautifully. The illustrations of everyone else are typical people that we would see and then between the conversation bubbles and Einstein the books becomes fun and humorous. All throughout this book Albert Einstein sends the readers a message. The first message is to dream big and follow those dreams. The second message is to never be afraid to be curious and ask why. Always question what you learn and try to figure out why. As the book ends he says, "I am Albert Einstein. I will never stop being curious. And I hope you won't either."

This picture book biography, told in graphic format, has humorous features that add appeal. It's told in first person and shows young Albert, replete with a shock of white hair and a mustache, With an updated slant, Einstein now sports a kind of lingo (awesome). He was late to speak (age 3), according to this book, and that's fodder to explore. I worry about misinformation in biographies about Einstein. (He wasn't as slow as a child, I don't believe, as some biographies make him out to be). When he was 4 or 5, his father gave him a compass, and the exploration with it opened doors to him: "It showed me that life has mystery. The universe has mystery. And it made me curious." This passage of the text is well supported with the famous quote included at the end: "The important thing is not to stop questioning. Curiosity has its own reason for existing...." The rest of the book shows Einstein's curiosity and genius: his interest in the violin, his interest in geometry and calculus when he was only 12. Although giving more attention to his childhood, the book does include his stint at the patent office, his brainstorm and eight years of thinking that led to his greatest breakthrough, the theory of relativity, and his being the winner of the Nobel Prize in physics. Kid friendly, Engaging.

This book was about Al...

This book was about Albert Einstein's life in addition to all of his success. I liked this a book a lot because it told Einstein's story, while sticking to a language that young children (elementary school and up) would understand. I also liked this book because it gave me some insight into things that I did not know about Albert Einstein, like the fact that he didn't speak until he was three years-old. I am Albert Einstein used specific instances in his life like when he was feeling sick and his father gave him his first compass, to show how his theory came to be. Brad Meltzer describes the curiosity that arose after Einstein's father gave him the compass, and says, "Right there, I could feel it: There was something behind things, something deeply hidden." This book also Albert Einstein's thought process through pictures, in order to show how his invention of the theory of relativity came about. Meltzer says: "When a person falls- like a man falling off a roof- he doesn't feel his own weight. Close your eyes. You can picture it too." The main idea of this book is to educate children about why Albert Einstein is famous, while also encouraging them to ask questions and be curious individuals. Meltzer writes: "Never stop trying to figure out how the world works. And never lose that feeling of excitement as you try to find the answer." This book instills confidence in children in addition to inspiration, hard work, and perseverance.