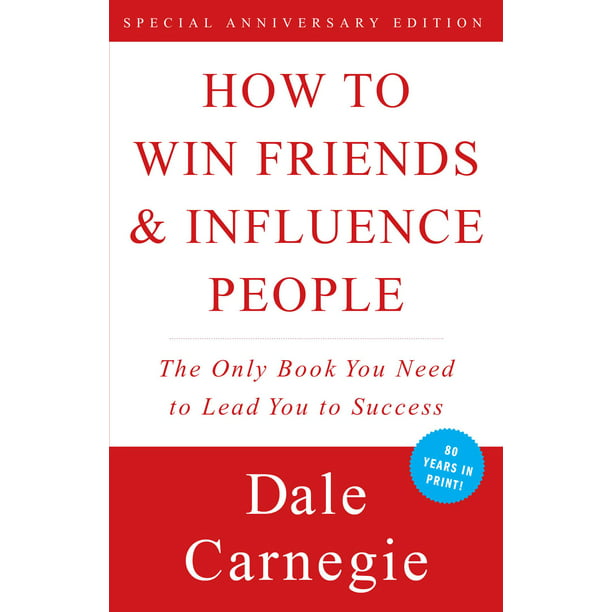 How To Win Friends And Influence People: The Only Book You Need to Lead You to Success

Dale Carnegie’s rock-solid, time-tested advice has carried countless people up the ladder of success in their business and personal lives. One of the most groundbreaking and timeless bestsellers of all time, How to Win Friends & Influence People will teach you:

And much more! Achieve your maximum potential—a must-read for the twenty-first century with more than 15 million copies sold!

I won't waste your time with a rundown of what "How to Win Friends and Influence People" is about. With over 15 million copies sold, and with a very self-explanatory title, I think you all get it. For the rare person who may not know what this book is about, here's a succinct description: in 1930s vernacular prose, Dale Carnegie explains that by appealing to the other person's highest ideals, remembering the other person's name, letting the other person do most of the talking, speaking in terms of the other person's interests, allowing the other to save face, by "throwing down a challenge," etc., you can make a friend out of just about anyone. The advice is largely sound, but I think the reader should keep in mind the context within which this book was written. "How to Win Friends and Influence People" was written in the 1930's and intended primarily as a companion book to Dale Carnegie's classes on how to be a good salesman. In other words, these techniques work very well in the context of sales and public relations, i.e., in relationships that are not expected to be deep and/or long-lasting. I wouldn't recommend using these techniques on close personal friends. Doing so may make a person come across as a bit "plastic." Also, there is one major point that I think needs to be remembered, but unfortunately is nowhere to be found in "How to Win Friends and Influence People." During my research of Dale Carnegie's techniques, I came across what I believe may be the only biography available about him: Dale Carnegie: The Man Who Influenced Millions by Giles Kemp and Edward Claflin. This book reveals many interesting things, such as the fact that Dale Carnegie grew up poor; he lost part of his left index finger when he was a child; he often broke many of the tenets set forth in this book, often forgetting others' names, often arguing with others, etc. But what I found most interesting was that the last chapter of "How to Win Friends" was to describe those individuals with whom none of Dale Carnegie's techniques work. In this unpublished chapter, Carnegie wrote that there were some people with whom it was impossible to get along. You either needed to divorce such people, "knock them down," or sue them in court. Why is that chapter absent from this book, you ask? Well, Dale Carnegie was in the middle of writing this chapter when he was offered a trip to Europe, and rather than complete this last chapter he decided to take the trip. The uncompleted book was sent off to publishers, and Carnegie shipped off to Europe. Giles Kemp and Edward Claflin say that given the optimistic tone of the rest of "How to Win Friends," the European trip was perhaps the better choice. Reconciling the the unwritten chapter with the rest of this optimistic book would've been nearly impossible, they say. Anyway, I think that this unpublished chapter is important to keep in mind. I had to learn the hard way that the unpublished chapter is very true. There are some people with whom it is impossible to get along. When you meet up with such people, and believe me you will, don't think that you've failed the Carnegie techniques. Instead, remind yourself that you are experiencing exactly what Carnegie describes in that pragmatic, unpublished chapter. And then quickly move on to the nicer people!

Excellent book, no wonders why it had more than 80 years being printing. A must read!

A Ray of Hope in Our Family Life...

Since reading this book, I feel like for the first time I have been given the basic instructions to approach obstacles in a positive way with a degree of confidence in a positive outcome. We have a child with Oppositional Defiance Disorder (ODD) and Attention Deficit Hyperactivity Disorder (ADHD) and we have been in therapy for 8 years with multiple counselors and psychologists with little to no improvement. She is frequently against anything and everything that we try to teach her or help her with and has no reaction to any type of discipline. In her mind she is always right, always has all the answers and when something goes wrong she is always the faultless victim. I have frequently felt completely hopeless and overwhelmed, and I have thrown up my hands and said that I have run out of ideas and answers about what we could do to help her. Now that I have read this book I have had floods of ideas in how I could approach day-to-day issues without getting as upset or trying to correct her behavior, and I have found many faults in my previous methods which obviously were not working. I have just finished this book so I can't say that we have worked any miracles but I began applying these simple principles while still reading the book and we are already experiencing more pleasant behaviors and finding more enjoyment in our time together. I have already recommended this book to several friends and family members and I'm hoping that they read it and can benefit from it as I feel I have!

I read this book 60 years ago and enjoyed it all over again.

Some of the best wisdom is found from 60 or more years ago. This book was new and looked like it was right off the press. Good delivery time.