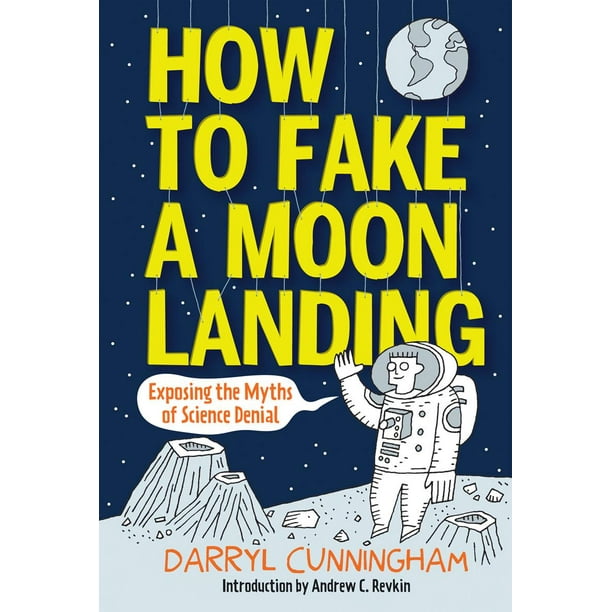 How to Fake a Moon Landing : Exposing the Myths of Science Denial

We aim to show you accurate product information. Manufacturers, suppliers and others provide what you see here, and we have not verified it.
2014 YALSA Great Graphic Novels list
10 Unforgettable Graphic Novels list by salon.com
2012 Best Book shortlist at the British Comics Awards (UK edition)

Is hydro-fracking safe? Is climate change real? Did the moon landing actually happen? How about evolution: fact or fiction? Award-winning author-illustrator Darryl Cunningham looks at these and other hot-button science topics and presents a fact-based, visual assessment of current thinking and research on eight different issues everybody's arguing about. His lively storytelling approach incorporates comics, photographs, and diagrams to create substantive but easily accessible reportage. Cunningham's distinctive illustrative style shows how information is manipulated by all sides; his easy-to-follow narratives allow readers to draw their own fact-based conclusions. A graphic milestone of investigative journalism!

Also available by Darryl Cunningham, The Age of Selfishness

Find teaching guides for How to Fake a Moon Landing and other titles at abramsbooks.com/resources.

Praise for How to Fake a Moon Landing

"Cartoonist Darryl Cunningham . . . is a welcome voice, shedding some much needed light on the darker areas of science and culture. . . . Cunningham does a remarkable job with difficult material and for high school students, just opening their eyes to the world around them, this is a terrific primer." --ComicMix

Packs a lot of punch in a small space. Not terribly elaborate animation, pictures to dwell on, but entertaining anyway and effective in communicating the message in several short stories. The battle for belief in scientific objectivity is one of the most critical issues of our time and is attacked by those with a vested interest in promoting irrational belief. The medium this book uses seems ideal for communicating the essence of the debate, shedding light and expounding an argument in time enough for a sitting or two. Hopefully a few people pick it up.

4Q, 4P This is an excellent read done in an accessible graphic-novel format. This graphic novel covers a wide variety of the science myths prevalent in our culture, with a particular focus on medicine and environmental issues. I gave the book a four in both popularity and quality. It should appeal to a wide variety of audiences based on two factors. First, its graphic-novel style gives the scientific content an easy to approach, non-daunting access point. Secondly, The scientific method is defended in the novel using current hot-button issues that most readers will connect to because of a high relevance to their daily lives. The arguments that Darryl makes in debunking many popular scientific myths are compelling and well-reasoned. I particularly enjoyed the detail in which Darryl explains the reasoning behind some of the pseudo-science he dispels, so that it is possible to understand why people buy into the false theories. The one flaw in his presentation is that he uses dramatic examples to prove his points, which could be argued to be unscientific as they sway readers' opinions. However, without this personal interest the book would be dry and so Darryl's choice is not so much unethical as it is an intentional way to garner interest in a possibly dull subject.

Although it is light r...

Although it is light reading, it would be great for teens, and even adults, who only have marginal scientific literacy. It covers a number of topics often debated rather poorly by the public, including moon landing denial, homeopathy, chiropractic, vaccinations and climate change. Nicely done.

This book caught my ey...

This book caught my eye on a recent trip to the bookstore, and I bought it on impulse. A non-fiction graphic "novel" about science denialism and various quackery? I mean, how could I resist?Cunningham chose topics that are intentionally controversial. The kinds of things that cause comment wars in science blogs over and over again: The Moon Hoax, Homeopathy, Chiropractic, The MMR Vaccination Scandal, Evolution, Fracking, and Climate Change. Which is exactly how they appear in the table of comments, though there is also a final chapter on Science Denialism in general.This was a fast read, visceral and concise. That makes the essays great nuggets for urging on a science-denying friend, but I sometimes wished for a little less brevity, particularly in the Moon Hoax chapter, But what I do particularly like about this book is that Cunningham does not try to set himself up as the ultimate authority on any of these issues. Rather, what he is promoting is the scientific method itself -- which, by its very nature is open to new conclusions should new evidence become available.So, yes. There are a few chapters that I'm yearning to find a tactful way to force on some particular friends who jumped instantly to mind. If that process is successful, this book will have paid for itself in spades. Until then, I suppose it can find a happy enough spot on my shelves.