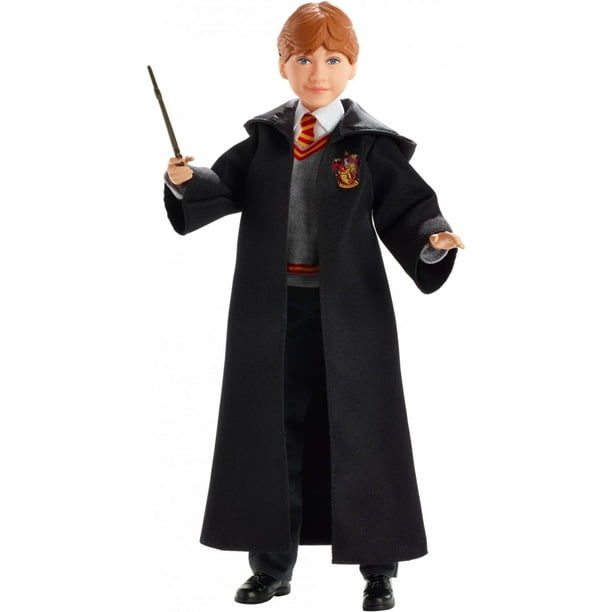 We aim to show you accurate product information. Manufacturers, suppliers and others provide what you see here, and we have not verified it.
This film-inspired doll brings Harry Potter and his friends back to Hogwarts! Young fans can recreate their favorite scenes from the movies, or imagine their very own, with Harry Potter dolls. Ron Weasley doll looks just like his character in the acclaimed film series and comes dressed in his signature Hogwarts uniform, complete with a Gryffindor robe. With eleven "joints" - in the neck, shoulders, hips, knees, elbows and wrists - Ron Weasley doll is ready for action storytelling and spellbinding poses! Doll comes with a personalized wand matching the one Ron uses onscreen - perfect for casting spells and inspiring imaginative play. Colors and decorations may vary

A must for potter-heads!

Comes in it's own plastic display case

Saw and had to have him! Hope more characters come

The doll that started my collection. Bought Ron from a local store around mid December, knowing I had to have him on first glance. About two days later I bought Harry since he needed his best friend, then McGonagall in January, and Hermione around March a few weeks before I saw Draco's appear in stores around me. Bought him shortly after that, and Ginny is next. I've been very impressed with them. My absolute favorite thing about this set has to be their high quality joints and faces, something I miss seeing in other doll recently. Ron's height is about the same as a Monster High doll. His sculpted hair makes him look a little foolish, but with his round and pudgy cheeks, it works on him. His face sculpt looks just like Rupert Grint when the first movie came out. That was the reason I couldn't put him down after I saw him. The shape of the head even gives him the look of a little baby fat, and I love it. The expression is amazingly sculpted and I love his sideways grin. His face up is also lovely, but simple. His eyes, though lighter than Rupert's in the movie, are lovely, and the light color suits Ron well. As mentioned before, Ron is more then a cute face; his body is well built with great joints. I love that he can sit at a table to do homework like a real person would AND with a wrist joint, Ron can fail spells over and over again! Oh my goodness! I really can't express how happy that made me when first looking at him! And every young wizard needs a wand. Ron is no exception. This tiny replica looks just like the prop ones, but is one flat color and could use a little paint to highlight it. His outfit is nice. Although I like more clothing pieces myself, the screen printing of Ron's outfit is very. His dress pants also fit him in a way that doesn't snap the velcro when he sits. He also comes with his class robe, which is not pictured. It fits nicely, but I like them better without it. Nice option to have, though. I hope you make more characters in the future, like Luna, Neville, Snape, and the rest of the Weasley family or anyone else. It you keep up with this quality, I'd even consider buying Umbridge and Voldemort. I'd also LOVE to see Hagrid, but I know he's unlikely since he would take more plastic to make. I would pay more for him, though. I also hope another Draco is in the making, but with is wand and in his school uniform like these.

This collector doll is extremely well made - the attention to detail is notable from the facial features to the clothes, the quality is exceptional and look identical to the characters in the movie. This is a perfect gift for any Harry Potter fan, child and adult alike.

Very detailed! It's about the size of a Barbie which I pleased about. I thought it would be smaller but I ordered it hoping it would be bigger! And it was!!!

These characters are awesome. Face details, clothes etc. for the money... great deal. We have almost all of them.

Ron one of Harry Potter friends and he's another gotta have

Ron Weasly replica doll is true to the real thing with detailed facial and clothing accurate to the books. At an affordable price point they provide the best possible experience for any child or collector. Highly recommend and a two thumbs up from me.

This is the second that I have purchased. the quality is excellent.

My daughter played with it only one day and the leg snapped just below the knee joint. Sheared clean off. Tried to glue it but it is just such an awkward place it won't hold. Tried several things actually. This doll was a lot more expensive than the other characters which I just don't understand either. This was the last doll that she needed to complete her set and we're really disappointed in the quality and the fact that we can't find a replacement.