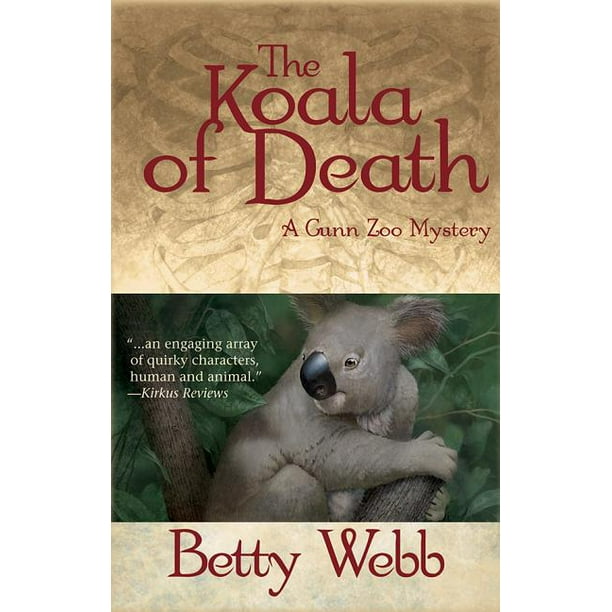 When zookeeper Theodora "Teddy" Bentley fishes the body of Koala Kate out of Gunn Landing Harbor, she discovers that her fellow zookeeper didn't drown; she was strangled. The clues to Kate's killer implicate other animal keepers at Gunn Zoo, including Outback Bill, marsupial keeper and Kate's Aussie ex-boyfriend; and Robin Chase, the big cat keeper who's got it in for Teddy. Also displaying suspicious behavior are several "liveaboarders" at the harbor; Speaks-To-Souls, a shady "animal psychic;" and even Caro, Teddy's much-married, ex-beauty queen mother.

But murderers aren't all Teddy has to worry about. Her embezzling father is still on the run from the Feds, and the motor on her houseboat is failing. To pay for the repairs, Teddy agrees to appear on a weekly live television broadcast featuring misbehaving animals that range from a cuddly koala to a panicky wallaby - and all hell breaks loose in the TV studio. All the while, the killer is narrowing in on Teddy....

OK, that is a fantastic title.Who knew that zoo mysteries were a thing? This is the second one I've read in the last month. I liked the other one, but I really enjoyed this one.It's also a cozy mystery, where a random person (in this case, Teddy, a zookeeper)gets involved with a murder investigation, often by being the one to discover the body (as is the case here).What I really like about this book is (in spite of multiple dead bodies) how upbeat it was. The koala was cuddly, the baby anteater was cute, Teddy's mother's crazy antics were motivated by affection. If I think about it, the book is fairly traditional cozy. The characters and setting are fresh enough to make it work. I really enjoyed this one, and am looking forward to reading more.

First Line: I awoke during a pearly dawn to hear something bump against the Merilee's hull. Unfortunately that bump against the hull of Teddy Bentley's boat wasn't a wake-up call from the resident sea otter who comes for breakfast every morning. The bump turns out to be the body of Koala Kate, a fellow keeper at the Gunn Zoo and darling of Good Morning, San Sebastian's Koala Kate's Kuddly Kritters. Having been a guest at a party aboard the Gutterball the night before, it is assumed that Kate drank too much, fell overboard and drowned, but the police soon disprove that notion. Kate was murdered. Before Teddy's detecting bones even have a chance to tingle, she's roped into filling in for Kate on the television station's animal spot because it's bringing in much needed good press for the zoo. But being on TV, avoiding her match-making mother, and filling in for Kate in the koala exhibit isn't enough to keep Teddy from doing her own investigating-- especially since she may be the next victim. The list of suspects in this book is a long one: from keepers at the zoo to various "liveaboarders" at the marina to an animal psychic to Teddy's own mother, and Webb does a masterful job at keeping us guessing. Teddy is a strong, feisty main character, and her stints on television are hilarious-- reminding me strongly of watching Joan Embery bring various critters to The Tonight Show with Johnny Carson. One of the things I appreciate the most about this Gunn Zoo series is that author Betty Webb can show off her skill with humor and satire. She also imparts a lot of knowledge about wildlife, so if you like your mysteries seasoned with a bit of fur and maybe a fang or two, I would highly recommend this series. Do you have to start with the first, The Anteater of Death? No, this one works quite well on its own-- but I wouldn't deny myself the fun if I were you!

In the 2nd book in the series, zookeeper Theodora (Teddy) finds the body of a fellow zookeeper floating in the water beside her houseboat. "Koala Kate" has been murdered. Teddy is asked to take over many of Kate's responsibilities, including tv spots and PR stuff - not Teddy's forte. Teddy's boyfriend, Joe, is the local sheriff, trying to figure out who killed Kate. I really enjoyed this. I love all the extra animal info that is shared throughout the book! I think I was actually more interested in things other than solving the mystery in this book, but I still really enjoyed it!

Zoo keeper Teddy Bentley is at hand when the body of a fellow zoo keeper Koala Kate is found. Kate was popular at the zoo but was also known because. Of her appearances with animals from the zoo are presented on morning TV show. The cause of death is murder by strangulation and Teddy can't figure out any good why anyone would want Kate dead. None the less despite strictures of Sheriff Joe who also happens to to be her boyfriend Teddy is looking for a killer.

This was a pretty good...

This was a pretty good read and a fairly good mystery. It had just about the right amount of "Zoo/animals" mixed in with some marina "liveaboarders" all wrapped up in Teddy's unusual life of work, love, family and all different sorts of friends and even some enemies. Two deaths that are too close, literally, to home for Teddy and she is off trying to solve the mystery as well as taking on a new, unwanted TV show, scrounging up donations for zoo projects, etc. and still trying to have some personal life with Joe, be somewhat civil with her ditzy mother and her incessant match-making plans, take care of her now 3 at-home animals--it isn't easy, but she does solve the murders and ends up getting----ooooppps. Gotta read the book for that last suprise!