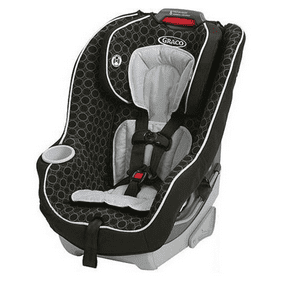 The Graco Contender 65 Convertible Car Seat holds a rear-facing infant from 5 to 40 pounds and keeps a forward-facing child in a harness from 20 to 65 pounds. It easily grows with your child with the Simply Safe Adjust harness system, which automatically adjusts both the harness and headrest height at the same time. This infant and toddler car seat features EPS foam, removable infant head and body support and two buckle positions to keep baby snug and secure. This convertible car seat is Safe Seat Engineered and side impact tested. Available in 8 different color designs including: Arabella, Black Carbon, Carly, Charter, Chili Red, Corey, Glacier, and Sapphire. Bring home the Graco Contender 65 Convertible Car Seat for your child today!

safety:Read the manual provided by Graco before using the product. Always secure your child when using the car seat. Failure to follow warnings and the assembly instructions could result in serious injury or death. 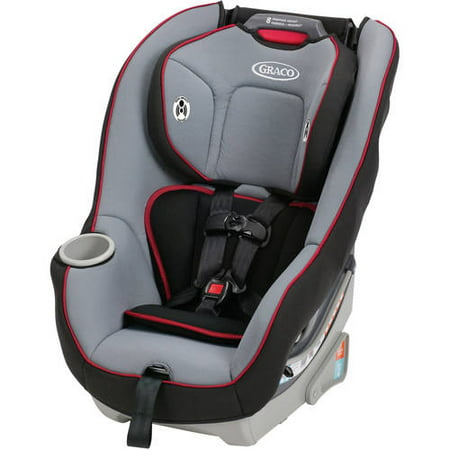 I love this seat!

I bought these for our two little girls, ages 2.5 and 1.5. Our older girl started using hers rear facing at 8 months old, and 20lbs. It felt much sturdier than other car seats I had used and she looked MUCH comfier than in her Graco Snugride 30. We started her little sister when she was 11 months old and kept her rear facing until 15 months old. This seat has hit every single one of my expectations and is so cheap compared to others with the same bells and whistles. The only thing I wish it had is the inright latch system to get it in and out easier, but it’s really not that hard how it is. [This review was collected as part of a promotion.]

I bought a contender 65 in March 2016 for my then 1.5 yo son and loved it. It was involved in an accident and I replaced it with another contender. I bought another contender for my then 9 mo daughter in October 2019. It’s a well built, solid car seat with all the basics I need without any unnecessary extras. I use one in each of our vehicles for my daughter, rear facing, and know that these seats will stand up to the abuse my kids will give them until she outgrow the seats, in another 7-8 years.

Reviewed by Megs mom of 2Megs mom of 2
Written by a gracobaby.com customer.
Helpful?
Average Rating:(5.0)out of 5 stars

We really like this car seat. We use it as our travel (haven't tried it on airplane yet) and seat for 3rd car/nanny/grandma car. It is easy to install, take out, tighten and loosen harness on my almost 3 year old. Cup holder is helpful too.

I have tried three other car seats and returned it for this one the head piece slides up and down for when kids get bigger which also slides the seat belt up so so fast and convient it's not too long where it's bumping into my seat and it's super comfy for my little man. Clear instructions and easy install. We ended up buying two!

Great. This item arrived on time and was super easy to assemble and install

Its nice and easy to fit. Quality is good. Seems comfortable

We did a lot of research on a good car seat for air travel (as our normal ones are too wide and heavy) and this one was highly recommended. Not only did it work well on our Southwest flights, but this chair is one of a few that have a belt path that is external to the seat - so the belt buckle is not against our 1-year old's back! That was great. It was easily installed on our flights and relatively lightweight compared to our normal carseats. It was also great to take the cover off and throw it in the wash when we came back from our trip. The reason for the 4 stars is the padding - it is very thin compared to what we are used to with our more expensive regular car seats. Our baby didn't seem to mind the seat, and we are definitely going to use it again when we travel. I personally wouldn't use it for every day just because we are used to a much thicker padding.

So I purchased this car seat for my grandchildren because of the great reviews that it got. Actually Graco is excellent for safety, (I was told this by the fire department where I went for a safety inspection and installation instructions). I haven't had any children in it yet but its a keeper from all the reviews that I've read on amazon. Very easy to install once you know how, use friendly, can use it for infant 5 lbs. up to 65 lbs. so this way I'm not purchasing multiple car seats and it looks like it will be easy to keep clean. Very happy with this purchase at a great price.

We used a Contender 65 with my oldest son and now we are using them with our twins. Unfortunately, the quality of the car seats have gone down over the years and I was actually kind of disappointed with these once they were installed. They’re better than Walmart cheapies, but not up to Graco’s usual standards.

To get started, the fabric is now cheap. It has a foam-ish feel and it just doesn’t seem like it’s going to stand up well to heavy use. Besides that, the harness adjustment switch has been put in such a ridiculous location. It’s in the front between the legs like it always has been, but they put it WAY up in the seat. So much so that it’s completely inaccessible when the seat is rear-facing. To remedy the horrific design, I would up taking out a seam ripper and removing the stitching on either side of the flap that covers the lever to adjust the harness tightness. With the sides freed, I can juuuusssttt reach my finger in there to make adjustments.

So, minus 1 star for the cheaper fabric and minus another star for whoever decided to place that adjustment button so far back on the seat.

Release is difficult to operate

The seat seems good but the button to release the straps is very difficult to press when rear facing. This makes using the seat frustrating.

1. Yes, this model comes with a removable infant head and body support.
by CommunityAnswer
Helpful?
2. Thank you for your interest! The Contender 65 includes an infant body support pad. We hope this helps!
by Graco Support
Helpful?
2 Answers

1. Thank you for your interest In the Graco Contender 65 Convertible Car seat. This car seat is not part of the recall due to the manufacture date of the car seat. The recalled car seat has a manufacture date of 2014
by Graco Support
Helpful?
2. : Over the past 60 years, safety has been and will continue to be our priority at Graco. Out of an abundance of caution and our commitment to providing quality and safe products to our consumers, Graco is recalling the harness restraints on certain My Ride 65 convertible car seats. While waiting for a replacement kit, consumers may continue to use My Ride 65 convertible car seats as the complete car seat unit is not under recall – only the harness restraint. The manufacture date of the car seat that are under the recall are from 2014
by Graco Support
Helpful?
2 Answers

1. Thank you for your interest in the Graco Contender 65 Convertible car seat. The model number for this car seat in the chili red pattern is 1927025.
by Graco Support
Helpful?
1 Answer