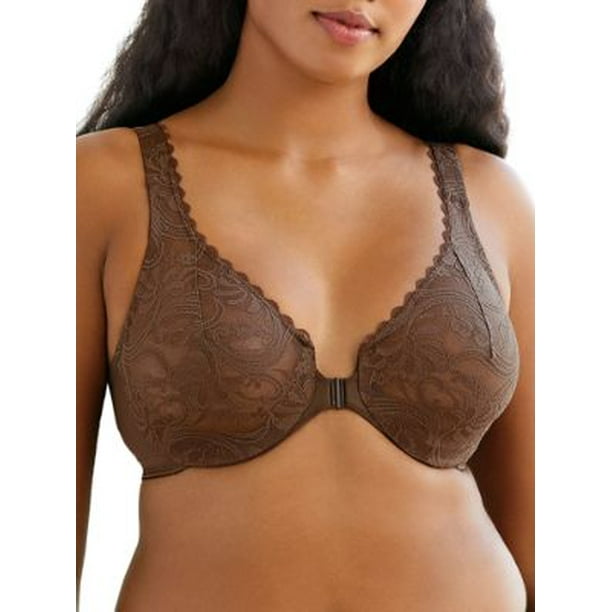 We aim to show you accurate product information. Manufacturers, suppliers and others provide what you see here, and we have not verified it.
Features
Glamorise Wonderwire Front Closure Stretch Lace Bra features the unique Wonderwire which provides unparalleled support. The Wonderwire is a wire that never touches the body, it features a hidden fiberfill cushioned band for maximum comfort.
Care Instructions What others said when purchasing this item
front close
Cathy, purchased on October 23, 2020
I worn these for years and you have the best price on them.
CAROL, purchased on September 13, 2020

Have bought these for many years. Just found them at Walmart cheaper. Love that they have underwires to give more support. Also has a front hook which is easier for me as have fibromyalgia

I have such a hard time finding bras to fit so when the first Glamorise showed up fitting perfectly I figured let's try a few more.... they all fit perfectly!! Fast shipping, no hassles whatsoever! Great experience I have already recommended to friends!

Very comfortable fits well which I'm always having trouble finding the right fit... so glad I went with this bra

This is the best bra I ever loved.

This is a beautiful bra . It supports my girls really well. So comfortable I wear them all day long without a thought. I use a mesh bag to wash them in with regular laundry and air dry. All 3 pairs holding up well.

Great bra, just wish it was easier to close.

Had trouble closing because the mechanism was too close to the underwire and you have to hold it at a 90 degree angle to slide the post into the slot before you can snap it shut. It fits but it would be more comfy with all stretch fabric and no band at the bottom. It is a pretty bra and holds my girls up enough that they stay dry underneath. That is a big plus. I do wish it came in a 42G. Im afraid a bigger band size would ride up in the back.

The support is phenomenal. There are two negatives to this bra though. One- there is a seam that starts at the top of the cup and ends mid-cup. Why it's there, I have no idea, but on one of my bras the seam was not sewn well and you could see its outline under a shirt-- it really stuck out that much. Worse, there was a little extra material at the end of the seam making it look like a nipple. Two- it runs a half-size small but that may be due to the great construction and durability of the fabric. Breaking the bra in may counter the feeling of it being a little small. This is a well constructed bra that should last longer than bras in the $20 range. I tore my rotator cuff so a front-closing bra is a must. I returned one of the bras for a refund due to defective sewing on one of the bras as mentioned before but kept the other two. So the seam was only an issue on one of the bras. I would suggest trying the bras under a t-shirt before deciding on whether to keep it. Also, If you are in between sizes, go with the bigger size.

on the small side

Very uncomfortable because underwire comes up too high in the front. Two bumps are also very visible where the wires come up.

Reviewed by LornakatLornakat
Written by a Just My Size customer.
Helpful?
Average Rating:(1.0)out of 5 stars

I ordered a size up and it was two sizes down. I know my size and this ain't it. The color, feel and quality were good. Just be careful on sizing.

Reviewed by Lady oneLady one
Written by a Just My Size customer.
Helpful?