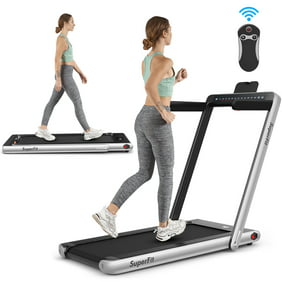 We aim to show you accurate product information. Manufacturers, suppliers and others provide what you see here, and we have not verified it.
The Gazelle Freestyle Machine offers 10 great exercises in a single easy-to-use machine. You can burn calories, tone muscle and improve your cardiovascular endurance when you work out on this machine. Providing both aerobic and resistance training for two-way calorie burning, you can get a full body workout with this Gazelle exercise machine. Similar to a cross-country ski glide, this workout machine uses two arm poles and two pedals to create a back-and-forth movement. Target specific muscles simply by changing your workout position; for example, where you grab the handlebars will affect how much work your upper or lower body gets. Or, if you hold the crossbar instead of the handlebars, you can target your leg muscles. Because this workout machine offers a low-impact workout, it is gentle on your joints. It comes with an workout DVD, a water bottle and holder and a nutrition guide.
Gazelle Freestyle Machine with Workout DVD and Water Bottle: Delivers a real workout for a fraction of the cost of an elliptical. Also takes up half the dpace. Plus folds up for easy storage when needed. Ours came with two DVDs, not one. Easy assembly. Definitely recommend.

I just got this yesterday. It came 1 day earlier than it said. I love this air walker machine! It is quiet and smooth! The machine measurements are more 40" long x 28"wide x 52 1/2" high. I was glad it was a little smaller than the measurements here said. The computer thing is cheap,btu I barely look at it , I go by how I am feeling when I exercise on this machine, I am so glad I go it!

Great Machine: Challenging To Put Together!

I bought this after using my friends Gazelle Edge for over a year. I have a family member who is quite heavy, so I had to get the Gazelle Freestyle instead of the Gazelle Edge as the weight limit is higher. Despite the fact that my friends had put together 2 Gazelle Edge's (one for themselves & one for a family member) it still took us over 2 hours for three of us to put it together. Things don't line up easily during installation; they knew how to do and it still took us over 2 hours; it was still better than paying some one to put it together. That being said, the Gazelle Freestyle is even better than the Gazelle Edge! My friends who helped me agree: The Freestyle is more smooth operating; it doesn't squeak at all, like the Gazelle Edge; now my friends wish they had bought the Freestyle instead of another Edge! The Edge feels stable when I use it, but the Freestyle feels even more stable. It also has the computer that informs you of your progress, which is a great bonus. Both do fold up; my friends leave theirs out so don't fold theirs up; I have to fold mine as I have less room; this is not an easy task for one person, but it's not impossible either; it's worth it as the more you fold it up and put it against a wall, the more you get the hang of the easiest way for you to do it; it's still not quite easy, yet it's easy enough that I do fold it up daily. I love being able to use it in my own home; it's great to use while listening to music, talk radio or even watching tv - really! Once you have the hang of how to use it, which doesn't take long at all, it's quite easy to do all the above while on the Gazelle; however, I wouldn't recommend trying to read a book while doing it. I use it in my home, rain or shine, hot or cold outside, daylight or after dark. It's the best money I've spent on exercising! In the past I joined a gym that is located less than a mile from my house; it was still not convenient like it is to exercise at home; a gym membership did me no good if I didn't go routinely. In the past, I had an expensive treadmill that folded up; it was so cumbersome and loud that after using it for several years, I gave it away. I prefer the Gazelle to a treadmill as it's so much easier on my knees and so quiet! When I got up before everyone else to use the treadmill, it woke up everyone else in the house. I use the Gazelle Freestyle and no one wakes up - it's that wonderfully quiet! My Advice: forget the gym, forget a treadmill; get the Gazelle Freestyle and supplement it with exercises that you can do without equipment. You will be much more likely to exercise in your home and you will save a lot of money!

great way to get moving post-injury

When researching this product online I read lots of comments about difficulty of assembly. The manufacturer must have listened. I had no problem assembling the Gazelle in a short time. It is solidly built and stable on the ground. There is no wobbling or creeping. It is completely quiet, so I can listen to music or podcasts during use. I can tip the Gazelle up on its wheels and collapse it for easy movement and storage. There is a Gazelle model with resistance, but I wanted a model to stretch and work my body post-injury with out pounding and pain.

I'VE ALWSYS WANTED A GAZELLE GLIDER WHEN I WAS YOUNGER

1. Yes, you can adjust the resistance on the Gazelle. First, locate the hydraulic adjustment pins where the handlebar meets the foot peddle. Then pull the clip, and slide the pin out of the hole it's currently in and move it to the hole you want. Slide the pin and reattach the clip. Repeat on the other side.
by CommunityAnswer
Helpful?
2. You adjust the resistance with your own body weight.
by cdharr
Helpful?
3. No, not on the freestyle or edge. You need the elite, but walmart has been sold out of them.
by knowItAllPerson
Helpful?
4. You change the resistance yourself by angling it forward or backward. No true resistance settings.
by battybat
Helpful?
5. Not on the Freestyle.
by WmtSiteToStoreShopper
Helpful?
5 Answers

1. Yes it can...think of it like a cross between a eliptical and a cross country snow machine.
by BadBackBodybuilder
Helpful?
2. This is not like an elliptical. The foot pedals swing forward and back only. You can turn backwards and use it but your feet are still moving the same way they would be if you were facing forward.
by puppybreath123
Helpful?
3. It had wheels for you to move it any direction you'd like.
by cdharr
Helpful?
4. Move backwards? Both of your feet are swinging back and forth in opposite directions.
by knowItAllPerson
Helpful?
5. It moves front and back sliding like a ski machine.
by battybat
Helpful?
5 Answers