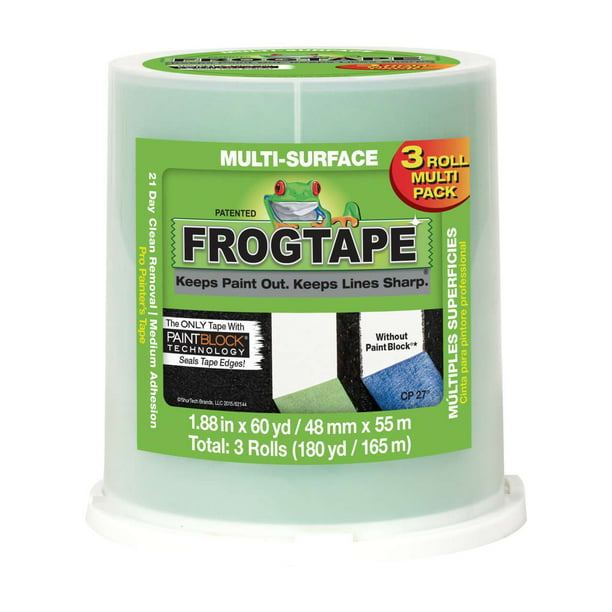 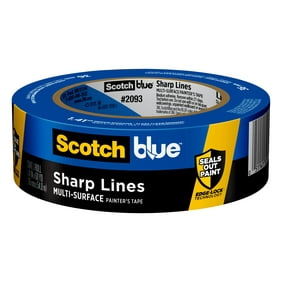 We aim to show you accurate product information. Manufacturers, suppliers and others provide what you see here, and we have not verified it.
Get crisp, clean lines on your next painting project with FrogTape Multi-Surface Painter?s Tape. How does it work? It?s made with exclusive PaintBlock Technology, a super-absorbent polymer that reacts with the water in latex paint and instantly gels to form a micro-barrier that seals the edges of the tape to prevent paint bleed. The result is a crisp, professional paint line. Designed to work on a variety of surfaces, this premium grade masking tape delivers a performance you can be proud of.
For best results, please read and follow these tips: For use on cured painted walls and trim, glass, metal. Tape can stay up for 21 days before you paint (7 days in direct sunlight). Remove immediately after paining, while paint is still wet.

What others said when purchasing this item
used the blue trying the green
norman, purchased on October 4, 2020
Needed painters tape
Paul, purchased on September 21, 2020

So handy!! Hundreds of uses

I use frog tape, aka green tape for us, for so many applications. I also put it on items as a green color code when I need to differentiate things. The obvious use is for painting. It does not ruin things when removed. I use it for sticking things together that I want to take apart later. Ive used it to hang temporary curtains, stick table cloths down for picnics, temporarily wrap things, close a bag of chocolate chips, and other random uses. Its so handy.

This is the best tape.

Best tape for so many things I personally use it for VBS every year. Its the only tape that will still to any surface and wont peel off the paint or leave anything behind. Heat or cold wont effect its hold will stay even if room goes from hit to cool multiple times.

This is great tape that has many uses. I use it to label food containers with the contents and date.

Did not live up to reputation

Paid extra over other brand expecting advertised results. Very disappointed with results. Will now have to spend extra hours painting over bleed through.

Used this tape for years. Never had a problem. But this recent roll is tearing up all of the paint I've already applied.

Incredibly thrilled to paint what I already have for the second time! I know why I choose Green Tape!

I normally purchase the blue painters tape when I’m painting but I read some reviews on the frog tape that it produces straight lines for corners where two different colors meet. Every review I read raves about how well frog tape adheres to surfaces and produces super straight lines, so I splurged and paid the extra money for frog tape. Well, I feel duped! I’ve gotten straighter lines with the regular blue painters tape. I thought maybe I just didn’t press it down well enough, but every time I’ve used it, it’s bled....bad! Now I have to go back and correct all the bleeds. I will never buy frog tape again. I recommend regular old blue painters tape. Save your money.

I purchased this to try in place of the normal blue painters tape and oh do I wish I hand't. Ican really speak to whether or not it actually keeps the paint from bleeding becuase I was more concerned about the excessive amount of paint that is pulled off the wall beneath it with you removed the tape. I used it to paint trim in two rooms and had to go back and completely repaint the wall area around the room because it stripped the paint off the wall. BUY THE BLUE STUFF!

After being recommended to use this I removed all the masking tape I had already put into position and replaced it with frog tape. Very disheartened to remove the tape and found it had bled. Now I have to go over the very dark painted bleed with white to fix it up.... it is going to be a very tedious and long fix. Very dismayed

Foggy pulls off the paint

in a nutshell since reviewer app is not user friendly, some seepage, but Froggy pulled off too much paint when removing the tape, trying to upload pics, but app keeps knocking me out/off!!

Bought this tape in spite of its premium price because the clerk said it was the best tape on the market. Turns out he was just trying to up-sell me.

Used Frogtape to mask a project that I sprayed with an alkyd enamel. As soon as the paint touched the tape, the tape lifted and paint got everywhere it shouldn't have.

Was later told by a friend it should only be used with water based paint. I found nothing on the package to say that.

Recently used Frogtape to mask window glass on an exterior trim project. When I tried to remove the tape, it came off in small pieces wherever paint had covered the tape. Not much good for acrylic either it seems.

THE GOOD: The green colour is pretty.

THE UGLY: My projects after using Frogtape