We aim to show you accurate product information. Manufacturers, suppliers and others provide what you see here, and we have not verified it.
Everyoneâs health and fitness journey is different - find yours with Fitbit Alta HR. Get the power of PurePulse heart rate in a slim, stylish wristband so you can better track your calorie burn, gauge exercise intensity, and see resting heart rate trends. Track all the basics like steps, distance and calories burned, and get friendly Reminders to Move that motivate you to keep stepping. And keep track of your workouts with SmartTrack automatic exercise recognition, which gives you credit for being active. Smartphone notifications keep you connected to your day, and you can tailor your look for any occasion with interchangeable metal, leather and classic bands. By night, Alta HR automatically tracks your sleep and shows your time spent in light, deep and REM sleep. Thereâs more than one way to achieve a healthier lifestyle. Move to the beat of you. 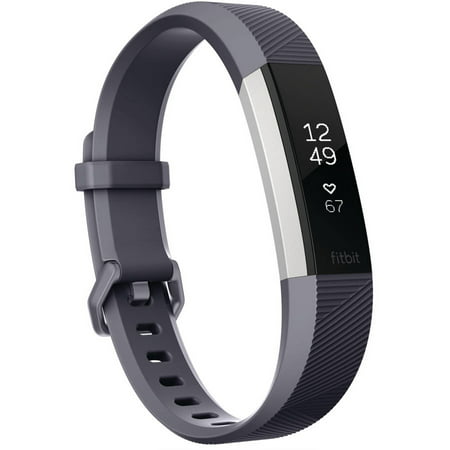 A Good Way to Keep Moving

I have had this FitBit for only two weeks, but I have already lost 1.8 pounds! I am not doing the diet part of the app. I am just moving more. My favorite feature is that it reminds you to get up and move 250 steps an hour. That simple buzz has increased my step count by an average of 1500 steps a day. I am pretty average in the amount of exercise I do a day, but I have already noticed that I think about moving more.

You can set your own goals, whether steps, weight loss, miles, calories, or others. It hasn't been as hard as I first thought it might be, mainly because the band itself gives you so much encouragement. It does celebratory buzzes and graphics when you reach your hourly goal and when you reach your daily goal. Plus the app has an easy to understand dashboard that also celebrates as you get to each of your daily goals.

Another feature I like is that it tracks your sleep pattern. It tells you not only how much you sleep, but whether it was REM, light, or deep sleep.

It also tracks your heart rate over the day, not only so you know if your exercise is vigorous enough to be cardio, but also things like resting rate and accurate calorie burn.

A couple of things to be aware of. When you first get it, CHARGE it before you try to download the app. I did it the other way and it was quite a hassle. Also it does need to be charged about every five days to a week, unless you always charge it while taking your morning shower. I try to charge it while I am neither active nor asleep - such as when watching television.

At first I had a hard time getting the band to the right tightness. I made it too tight because I was concerned that if it wasn't snug the heart monitor could not read very well. It is like a rubber band and made my hand tingle. But adjusted to a looser (not snug at all) fit, it still works just fine and I notice it as little as I would a bracelet or watch.

Great addition to the Fitbit family

The Fitbit Alta HR continues the original Alta's slim looks and metallic case, and adds a heart rate monitor to the mix. I'm testing the large with black band, but of course there are many compatible bands to try also. I like the auto train feature which starts tracking your workout after a set period of continuous activity. Active minutes through the day are also tracked.

Heart rate tracking includes fat burning, cardio, and peak zones. Resting heart rate trends, something your doctor considers important are also recorded. I was able to verify the heart rate accuracy while at a recent office visit. The Alta and my doctors BP equipment both recorded 76 bpm, pretty cool!

Daily calories and water consumed are easily added, with options to save frequent, recent or even custom foods.

The thin display means you have to get used to reading the display at an angle, unless you want the numbers stacked on top of each other.

I haven`t tried connecting with friends or sharing accomplishments yet, but the encouragement announcements and merit badges are great for keeping me motivated.

In the package is a tiny booklet pointing you to their website for setup after you download the Fitbit app. Setup was very easy, taking just a few minutes. Also in the box is the charging dock with connected USB cable (20"), you'll have to supply an A/C adapter or plug into your computer to charge.

Fitbit is certainly one of the top fitness tracker makers, and I really appreciated this opportunity to test the Alta HR.

Love the way it was made so you can change the wristband easily and change it to a different color wristband. The charger cord is unique with a clip to keep the charger attached to the fitbit so it can charge. I love all the options on it like if you want the time vertical or horizontal. You tap it to see the time, heart rate, steps, calories burned, miles, and active minutes.

Getting in touch with your heart.

The Fitbit Alta HR will become part of you and your life. I was amazed at how it felt more like a band and less like a watch. The strap is unlike a watch since it is more of a flexible rubber band that isn't elastic so it is very comfortable. The band has about 10 notches to adapt to any person. Because of this band it feels better than a normal watch band. You can even purchase designer bands to suit your fancy. The screen is a nice addition with the Fitbit Alta HR making it easy to read even in daylight.

There are three ways to setup and communicate with the Fitbit based on your network. The first option to connect is to download the Fitbit app to your mobile device and synch up the Fitbit by registering online. The next is to download the app to your computer and communicate via Bluetooth. If you want to just connect via Wi-Fi then you need to purchase a Fitbit Dongle for about $5 but it has to be a link without a password.

I really love that the Fitbit app gives you all the feedback you need to be healthier. You will get to see how increasing activity can help get you into an ideal heart rate and burn more calories. More importantly, the Fitbit Alta HR will tell you how much your heart beats at rest. It will even tell you how much you slept and wake you with a vibration so you can turn off that alarm clock buzzer. Your phone can even alert you thru the Fitbit when a call or text arrives.

This is one of the latest exercise and fitness devices on the market. The Fitbit Alta HR provides many functions to monitor during certain hours or all day if you so choose. Here are some of those functions: heart rate, sleep quality, distance traveled or steps taken, calories burnt, time of exercise. These are but a few to select from. The watch bands come in several sizes and you can buy extra ones with different color and style. The Fitbit Alta HR comes with a charger attachment which can be used with your computer or other universal charging device The Fitbit Alta HR keeps track of the charge. You can also request with the Fitbit App other reminders to keep you motivated and check on your goals and progress. You can SYNC wirelessly with IOS, Android & Windows Mac & PC computers along with you smart phone systems. Initially I had some difficulties setting up the device and SYNC with my Android smart phone. I believe this was because the device needed to be charged first before trying to set up. You don't have to be a computer geek to set it up and there are lots of "how to" videos on YouTube to help. I have been enjoying this little device but need to remind you as stated on the box "Not intended to provide medical or scientific data." One of the things which I continue to have problems is activating my Fitbit.....you can do this either with turning your wrist or tapping it twice. I guess I need to be a little more forceful???? Also, I wish the various readouts would display for a longer period of time. I have been wearing this for about 2 weeks now and perhaps there is a adjustment I can do to correct this. Reminder, it is water resistant but not water proof so take it off for swimming or taking a shower. Good Health to You!

1. No, this item is water resistant not water proof
by CommunityAnswer
1 Answer

1. No, the activity band is not waterproof.
by CommunityAnswer
1 Answer