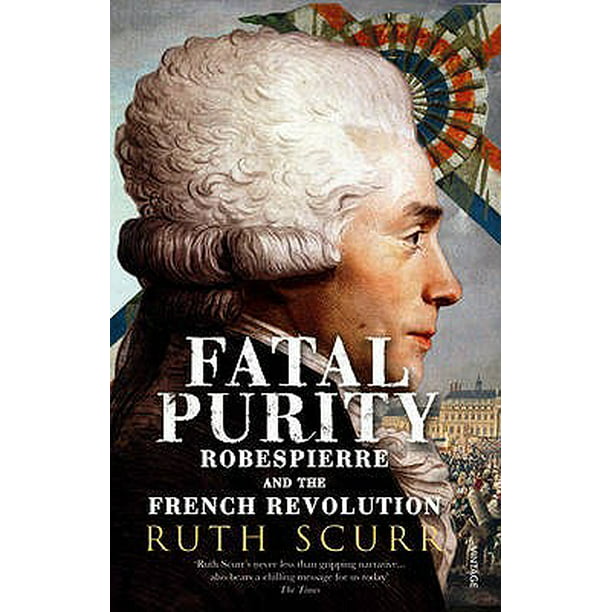 We aim to show you accurate product information. Manufacturers, suppliers and others provide what you see here, and we have not verified it.
Against the dramatic backdrop of the French Revolution, historian Scurr tracks Robespierre's evolution from lawyer to revolutionary leader. This is a fascinating portrait of a man who identified with the Revolution to the point of madness, and in so doing changed the course of history.
Robespierre was only thirty-six when he died, sent to the guillotine where he had sent thousands ahead of him. Robespierre and the Revolution were inseparable: a single inflexible tyrant. But what turned a shy young lawyer into the living embodiment of the Terror at its most violent?

Cambridge University historian Ruth Scurr's first book might be one of the most gruesome biographies I've ever read. Fatal Purity: Robespierre and the French Revolution is the tale of Maximilien Robespierre, "The Incorruptible" - one of the foremost leaders of the Revolution which would ultimately condemn even him to death. The French Revolution is a subject I am not particularly familiar with, but having spent last semester in a graduate seminar on its American counterpart, I thought this book would at least prove interesting. It was that, and much more. Scurr has woven together an excellent narrative on the life and times of Robespierre, focusing necessarily and appropriately on the Revolutionary years. This is not a book for the squeamish - after about page 60 at least one person is put to death with every turn of the page (I exaggerate, but only slightly). It provides a fascinating comparison to the revolution in America, whose leaders somehow managed not to start chopping off each others' heads once they'd won. I had very few quibbles with this book; I do wish that Scurr had discussed in more depth the impact of America's struggle on the French revolutionaries, but I'll set that aside. On the whole, I really enjoyed this biography of a deeply principled yet somehow just-as-deeply unlikeable man. For the casual reader of biographies, this is highly recommended; for those interested in a deeper understanding of the difficulties and trials of the French Revolution and the people who made it, I recommend Fatal Purity just as highly.

A well written and fas...

A well written and fascinating account of the life and career of this most famous and infamous of French revolutionaries. Robespierre is a fascinating man of contrasts. For much of his life, certainly before the Revolution and for a couple of years after the fall of the Bastille, his positive points predominate - a passion for justice and for the plight of the poor, as shown by his advocacy of the poor in many court cases when he was a simple lawyer in Arras, and by many of his speeches afterwards; and his radical and uncompromising democracy, an advanced phenomenon in the 18th century. It is only really from 1792, the fall of the monarchy and the suspension of the 1793 constitution before it ever came into effect, that we see the awful side of Robespierre - his singlemindedness becoming a complete personal identification of his own views with the interests of the Revolution, and an utterly and chillingly sincere belief therefore that those opposed to himself and, ipso facto, the Revolution must die - the title of this biography "Fatal Purity" is well chosen. The story from the arrest of the Girondins in June 1793 is the story of the fall and massacring of one faction after another until Robespierre's own fall and death in late July 1794. There are some sickening, horrific and tragic stories along the way, especially those of the prison massacres of September 1792, the separating of Marie Antoinette from her children, the execution of Camille Desmoulins's wife and the many poor and working class people who fell under the guillotine's blade - it was by no means aristocrats who were its most common victims as is commonly supposed. A great and tragic read.

Excellent. shows the strength of biography for getting across complexities of history. R's life makes for a clear narrative and a sense of who's on which side in the swirling tide.We learn also that R was no villain but pretty paranoid; he voted for abolition of the death penalty in the early days, but later deemed it necessary for dealing with "internal enemies". We also see the noose gradually tighteningfom the Declaration of rights which entailed an end to torture and cruel punishments until the climax where no evidence is required to condemn someone and there is no defence, no appel, and no punishment other than death. What is not clear is how this consummate political operator reached the pinnacle of absolute power, only to be overthrown within the year. seems absolute power is only relative. Score writes in vivid form with mastery of facts and background; slight flaw at the end where she dramatises R's scream from the scaffold and in the Coda from Wordsworth's Prelude, where she shows how mistaken W was about R - but this just leaves the reader with a So What?