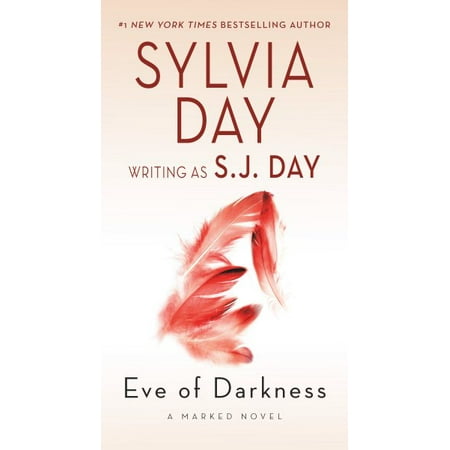 We aim to show you accurate product information. Manufacturers, suppliers and others provide what you see here, and we have not verified it.
Uncontrollable bloodlust, dark and sexy desires, disasters of biblical proportions? S.J. Day?s epic series has it all and is not to be missed.Eve of Darkness

Sproingg...thud. That was the sound of me jumping on the "Eve of Darkness" bandwagon. S.J.Day has penned a fascinating tale twined around the ultimate legend regarding good and evil--the story of Cain and Abel. Of course, in Day's version the Bible didn't quite get the whole story...and so far neither do we. But I got enough hot sex, mythological mystery, and rumbling action to keep me glued to the pages. Eve lost her virginity to a rock-star, handsome and sexy stud on a Harley. Then he disappeared. Although it's ten years later, she's never forgotten him. When she catches sight of a man that closely resembles him when leaving a job interview, she's stunned by the almost magical sexual pull. Though she knew better, she couldn't seem to help herself...and now she's been given the mark of Cain. Her new job will be to take out Infernals (demons, werewolves, and a multitude of other assorted evil critters) under the guidance of a kind of heavenly corporation run by angels. As if that's not enough to blow a girl's mind, Eve has become the bone (HAH HAH HAH) of contention between two brothers...rather famous brothers actually--Alec Cain and Reed Abel. I loved this story. I'm guessing the author has probably received a fair share of nasty-grams from the Moral Majority--unless they're too uptight to read paranormal romance! I personally found her twisted take on the age-old story riveting and very, very clever. Poor agnostic Eve, thrown into the middle of an ancient rivalry of Biblical proportions. She's attracted to, feels for, and is torn between the two brothers whose enmity is total and unending. It's very easy to identify with Eve. A normal woman with a normal childhood who gradually grew away from organized religion is now suddenly faced with a reality she can barely grasp. God and Satan exist, and so do Heaven and Hell, not to mention the factions of the heavenly host and satanic minions living here on Earth, trying to keep the eternal battle a secret from humans. "Eve of Darkness" begins with the ending in a way. The rest of the book smoothly unfolds the story so far and the action is mostly non-stop. While there IS an ending, readers should know that reading this first book will only make you drop whatever you're doing to rush out and buy the next to continue with Eve's story. That's what I plan to do first thing tomorrow. S.J. Day's entry onto the paranormal romance/urban fantasy scene gave me a thrill and a hunger for more.

Written by a customer while visiting librarything.com
10
Average rating:5out of5stars, based onreviews

I loved this book so much I'm going to ask the library system I work for to buy it as well as the rest of the trilogy. I can't wait for the next 2 books. No need to go into the storyline as the other reviewers have already done so. This is just such a fresh take & so action packed that it's a must read for anyone that enjoys this genre. Hats off to S.J. Day, what a great first book!

This book was thorough...

This book was thoroughly entertaining. I had equal parts of action, sex and intrigue. I have to say one of my favorite parts was death by lime jello! Quite amusing! This book has religious themes with out being overbearingly preachy and shows the darker side of it. Action packed and fast paced, definitely an escape from reality! Will definitely pick up the next installment!

"I absolutely loved this book. It has all the elements of a great book- great action, a mystery, many scary creatures, a love triangle, and a main character that we feel for and come to care about. Do not be intimidated by the religious references or the talk about the "sex" in the book. Both are well done and not, in any way, offensive whether you are highly religious or not religious at all. I liked the book so much I did not want to wait to read book 2 and 3. I went right out and bought both of them."

As a consequence for s...

As a consequence for sleeping with the wrong man, the life Eve's created for herself has been ripped away. Finding out if she's strong enough to survive what her life has become, is the stuff Urban Fantasy dreams are made of. Humans ignorantly co-existing with creatures of good and evil. Uniquely fierce and amusing Baddies not down with G.O.D. Heavenly hierarchy taking shady corporate rat race shape, where even Angels have gray or dark motives. Just enough old testament nuggets to add heft and substance without going into preachy snore territory. Full fleshed out characters and motivations. This book is sexy as hell, but it doesn't detract from the story quality. Day weaves the tension and action like a pro, so it adds depth and texture to the motivations of the players in this drama.